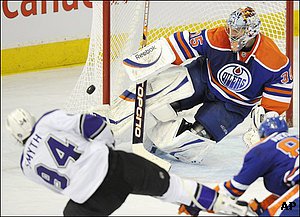 — The Kings completed a four-game season-series sweep of Edmonton as they beat the Oilers 2-0 on Tuesday night at Rexall Place.

— The Kings beat the Oilers three times in regulation and once in a shootout this season. The Oilers totaled five goals in the four-game series.

— The Kings have an 8-1-1 record in their last 10 games, and allowed two or fewer goals in eight of those 10 games. The Kings have six consecutive road victories.

— The Kings recorded their ninth shutout of the season.

— Jonathan Bernier made 32 saves for his second shutout of the season and his third career shutout. Bernier has allowed two or fewer goals in five of his last six starts and has a 6-0-2 record in his last eight starts.

— Ryan Smyth had one assist, and has one goal and three assists in his last three games.