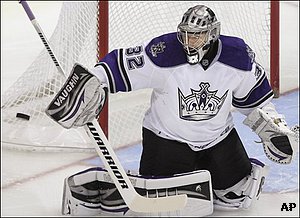 — The Kings got a game-winning goal from Michal Handzus with 20.8 seconds remaining as they beat the Dallas Stars 3-2 on Sunday afternoon at American Airlines Center.

— The Kings now lead the season series against Dallas, 3-1-1, with an April 2 game at Staples Center remaining.

— Jonathan Quick stopped 21 of 23 shots and became the first goalie in Kings history to record 30 wins in back-to-back seasons. Quick has a 30-17-2 record this season. Quick has allowed two or fewer goals in three consecutive starts.

— Dustin Penner scored a goal. Penner has recorded at least one point in five consecutive games, and has two goals and three assists in six games with the Kings.

— Anze Kopitar had one assist. Kopitar played in his 324th consecutive game, which tied the Kings franchise record set by Marcel Dionne from 1978-82. Kopitar’s streak started in March 2007. Kopitar has recorded at least one point in nine of his last 10 games and has seven goals and eight assists in his last 10 games.

— Justin Williams had one assist. Williams has recorded at least one assist in five consecutive games and has two goals and six assists in his last five games.

— Wayne Simmonds had one assist, his 13th of the season.

— Dustin Brown played in his 500th career NHL game and became the 18th player to play at least 500 games for the Kings.