Bit of a homecoming for Martinez - LA Kings Insider

Bit of a homecoming for Martinez 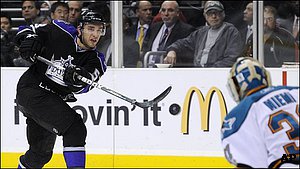 Tonight will be Alec Martinez’s first hockey game in Ohio in almost three years. Martinez spent three seasons at Miami University of Ohio, which is about a two-hour drive southwest of Columbus. Martinez still has some friends on the college team, players who were freshmen when Martinez left school after his junior season. “I don’t know if any of my buddies are going to be able to make it, because they don’t get out of the rink until about 5:30,” Martinez said. Martinez still has a connection to the school, as he is fulfilling a promise to his parents to get a college degree while still playing pro hockey…

MARTINEZ: “I’m pretty close. I’m about a semester away now. I’m just kind of chipping away during the summer, chipping away with online classes. I’ll get it eventually. I promised my parents I would, so I have to. … I’m an accounting major. A lot of people find it boring. I don’t know, I guess it is kind of boring, but it’s all right. Everyone always needs an accountant. They have a pretty good business school, and I hated finance, so that was kind of my only option. It’s cool to come back here. Going to school there, I watched a lot of Blue Jackets games. I know a few people around here in Columbus, so it’s somewhat of a homecoming.”

Since being called up from the AHL on Nov. 23, Martinez has been in the lineup for every game and has played 36 games, averaging more than 16 minutes per game in his rookie season.

Question: It’s been you and Matt Greene for a while. Do you feel like there’s some chemistry on the ice there?

MARTINEZ: “I think that we’ve got some good chemistry going. There are little things that, when you start playing with each other for a while, you know where they’re going to be at certain times, things like that. So we’re just getting comfortable with each other. I think we’ve got a good thing going. We’ve just got to keep it going.”