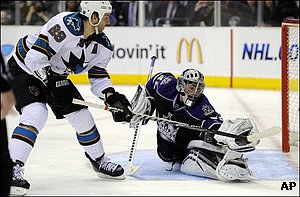 A special good morning to the Sharks fan with whom I shared an elevator during the second intermission last night. That would be the fan who, apparently having enjoyed the Staples Center’s selection of alcohol a bit too much, vomited on the front of his jersey and required a stretcher to get to the first-aid area. That really made it a special night for me… That said, here’s a couple looks at last night’s Kings-Sharks game from the San Jose Mercury News’ David Pollak — always a sober, responsible and talented beat writer — followed by some additional postgame quotes from the Sharks’ locker room…

COACH TODD MCLELLAN
(on the game…) “I think we came to play. I think the effort was there, the grind part of the game was there, but I don’t think we were sharp enough to win. If you look at the power-play opportunities we had, we didn’t generate. … That’s usually our bread and butter. So when that wasn’t there, it took a lot of momentum out of our game. And obviously when you have four shooters, you expect to at least get one by him (in the shootout). Sharp enough for a point, not sharp enough for two.”

(on what he expects, post-All-Star break…) “Down the stretch, we’re going to see games like this on a nightly basis. It’s going to be no different for us than for probably 12, 15 teams. We have to be prepared to compete every night, give ourselves a chance to win games, and if the opponent is better than us then we have to live with that. But show up and play.”

RYANE CLOWE
(on the game…) “I thought we kept going. Even after they scored that goal, we had a good push. Would have liked to probably get a little something on that power play, a little more pace…but if you look at the shots, obviously it was a tight game. … It was a tough game. I thought we played pretty hard. Both teams played like they needed those points. It would have been nice to end it on that shootout (attempt).”

LOGAN COUTURE
(on the game…) “We played all right; it’s still tough not to get that extra point. The conference is so tight that those points from the shootout are needed. We were disappointed with not getting the win, but I did think we played a pretty good game and had our chances to win it.”

(on his overtime shot…) “I thought it was in. He [Jonathan Quick] must have just put his foot out there a little longer. When I turned around and fired, I didn’t think there was a chance that he was going to make that save. … When I went to my backhand, I kind of lifted my stick and I turned around and I knew he was pushing across that way and he was sprawled out. I don’t know how he saved it.”