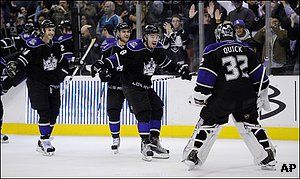 — The Kings won their third consecutive game, as they beat the San Jose Sharks 3-2 in a shootout on Wednesday night at Staples Center.

— The Kings go into the five-day All-Star break in 11th place in the Western Conference, with 55 points in 50 games. Seventh-place Chicago, eighth-place San Jose and ninth-place Colorado all have 56 points in 50 games. Minnesota, in 10th place, also has 55 points, but has played one fewer game than the Kings and also has the first tiebreaker.

— The Kings are 5-0 in shootouts this season, the most wins in the NHL without a loss. Buffalo (4-0) and Colorado (3-0) are the only other unbeaten teams in the shootout.

— The Sharks outshot the Kings 24-20. It was the Kings’ second-lowest shot-on-goal total of the season — they had 19 in a victory over Vancouver on Oct. 15 — and it was the eighth time in their last nine games that the Kings held their opponents to 28 or fewer shots on goal.

— Jonathan Quick stopped 22 of 24 shots, plus all four San Jose shootout attempts. Quick is 5-0 in shootouts this season, having stopped 20 of 23 shots (.870 save percentage). For his career, Quick is 17-7 in shootouts, with a .727 save percentage. Quick has allowed two or fewer goals in four of his last five starts.

— Ryan Smyth scored a goal, and now has a team-high 19 goals. Smyth has two goals and two assists in his last three games.

— Alexei Ponikarovsky scored a goal, his fourth goal of the season and his first since Dec. 18. In between, though, Ponikarovsky missed six games with an ankle injury and was also a healthy scratch in two other games.

— Justin Williams had an assist, for his 39th point of the season in his 50th game. Last season, Williams had 29 points in 49 games.

— The Kings won 25 of 43 faceoffs (58 percent). Michal Handzus won 9 of 10 draws (90 percent). The Kings have won more than half of their faceoffs in seven consecutive games.