The puck is frozen, solid, and it hurts - LA Kings Insider

The puck is frozen, solid, and it hurts 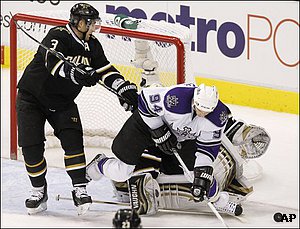 It’s certainly not unusual to see players get hit by pucks in practice. It happened to Kings defenseman Davis Drewiske last week, and Drewiske got away with nothing more than a nasty cut above his eye, and we’ll find out tomorrow morning if Ryan Smyth got similarly lucky. Smyth was hit on the leg by a slap shot in practice today. Many times, I’ve marveled at how players don’t suffer more injuries on plays such as those. In fact, it’s normal to see a player standing alone, directly in front of the net, facing a shooter and trying to deflect slap shots with his stick. It’s almost like a baseball player practicing diving out of the batter’s box to avoid a fastball. It’s basically an occupational hazard, Terry Murray said after practice.

MURRAY: “That’s what happens when you practice the power play. Power play and penalty killing. I’ve seen it happen many, many times. You get that shot that gets away, and someone gets hurt. I’ve seen it up to the face, and it can do a lot of damage. … He turned around, and it got him in the hamstring, it looked like. All the equipment is on the front of your body. You’re better just to stand there and keep your feet on the ice and deal with it from there. You get some guys doing the `flamingo,’ and wouldn’t you know, the foot you lift is the one that gets blasted.”