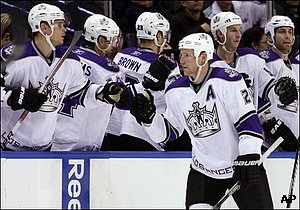 Over the next few weeks, we’ll find out if the Kings’ “stay the course” attitude is the right one, or whether it’s the NHL version of whistling past the graveyard. For now, all we know if that everyone is preaching patience. This morning, as previously quoted, Dean Lombardi talked about the “critical” need for everyone, “as management, as coaches, as trainers, everybody, you stay with it.” So, at this point, it’s clear that there are no major changes on the horizon, so we’ll see what that means. There’s a fine line between not panicking — panic never leads to anything good — and standing flat-footed and watching the season go by. Which way will it go? After practice today, Terry Murray talked about the need to emphasize the positives from Tuesday’s loss to St. Louis while looking ahead to Thursday’s game against Phoenix.

MURRAY: “As soon as we came in (after the St. Louis game), it was very emotional and it was a very hard way to lose a game. I said, `Look, guys, it’s not what we wanted for a result, but there were a lot of good things in that game that have to be brought back home and built on. Keep doing the same things, because the results will start to flow.’ I said, `Every one of you forwards contributed tonight. We rolled four lines. There was the right stuff on the forecheck. There was physical play. There was a good presence by every one of you guys.’ The defense group did a great job. The penalty killing, we killed off three big penalties. The 5-on-3 is a hard one, but everyone was blocking shots and sacrificing themselves. Quick made huge stops at times in the game. So we just need to keep going with that, bring it home and build on it.”