Can they recapture the magic? - LA Kings Insider

Can they recapture the magic? 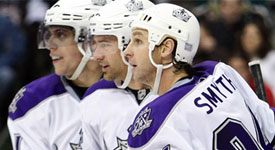 Now, the Kings go for No. 1 Line, version 10.0, with Kopitar centering Smyth and Williams. That’s the line that had great success at the start of last season, got derailed by injuries to Smyth and Williams and then was unable to recapture the magic late in the season. This season, Smyth, Williams and Kopitar rank first, third and fourth, respectively, in goals for the Kings, so Murray is looking for a spark.

MURRAY: “We’ve got to get some wins on the board, and you’re trying to find something that’s going to be the catalyst to get it going right now. I’d like to think that that could be a good look. I’m hoping it is. We’ll see, obviously, in a couple days, when we start playing again. There was nothing that I was upset about with Zeus on that (Smyth-Williams) line or with Kopi and Brownie. In fact, I like Kopi and Brownie. They’ve had a great start to the season, a great month of December. They put up some good numbers, but again, it’s to get a different look at some lines, and hopefully get some good energy coming as a result of it.”

The move is fine by Kopitar. Last season, from the opening game until Nov. 16, when Smyth suffered an injury, the Smyth-Kopitar-Williams line played 22 games together. In that span, Kopitar had 14 goals and 18 assists, Smyth had nine goals and 14 assists, and Williams had five goals and 10 assists. So, Kopitar wasn’t really surprised when the line was reunited in practice today.

KOPITAR: “It comes and goes, I guess, with Terry. He has shown that he’s not afraid to mix the lines. Now, putting us together again, hopefully we can produce and hopefully we can stay together for a longer period of time.”

The moves, Murray said, were not a reflection on Brown, who moves off the first line after playing there for the first 42 games, either on left wing or right wing. Brown is tied for the team lead with 17 goals and is third on the team with 34 points.

MURRAY: “I talked to him before the practice today. He understands what coaches do, with moving lines around and looking for different combinations that are going to be the spark to get something going. He agreed, he understood, when I spoke with him this morning. I spoke to Zeus about it before the practice. Everybody understands what is happening.”