Simmonds shows fight; Kings, not as much 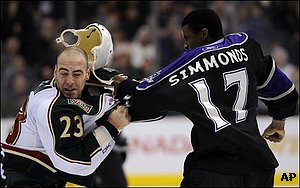 It was not surprising. In fact, in many ways it was expected. Nashville scored its third consecutive goal, in a span of less than seven minutes, to take a 3-2 lead with approximately five minutes remaining in the second period and, on the next shift, Wayne Simmonds fought Francis Bouillon. It’s practically a time-honored tradition. When a team’s fortunes are headed south, a stout-hearted player drops the gloves in order to try to give his teammates a boost, to get them fired up. Simmonds fared quite well against Bouillon, and got the Staples Center fans back into the game, and then…the Kings didn’t score a goal in the final 35 minutes. Of course, a fight isn’t an iron-clad guarantee of improved play, but Terry Murray said today that he expected his team to get more of a lift from Simmonds’ actions.

MURRAY: “Yeah, we sure did. In fact, we talked about it between periods in the locker room. He’s an amazing guy when he gets into a fight. He always seems to do damage. But I really thought that that would bring a good spark, to get us back on track. You have a 2-0 lead in the (second) period, and when he does that, you’re hoping that it’s like changing a goaltender sometimes, that it’s really going to excite everybody and get them back to doing the right things on a high-energy, high-level basis. It didn’t work out.”