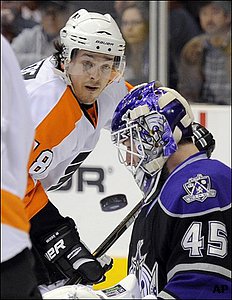 Here’s how Philly.com — the online arm of the Philadelphia Inquirer and Philadelphia Daily News newspapers — presented last night’s Kings-Flyers game, along with a nice piece of Kings assistant coach John Stevens facing his former team for the first time, plus some additional postgame quotes from the Flyers’ locker room…

COACH PETER LAVIOLETTE
(on the play of goalie Michael Leighton…) “I think when you’re out for a long period of time and you’re coming off of surgery and you step back in the National Hockey League, you’ve got a lot of work, you have to feel your way around a bit. I would say anybody’s got to do that, but then it makes it tough on a goaltender. You get through it and get some work and get a win.”

MIKE RICHARDS
(on the first period…) “We knew it was too early (for concern). First period is obviously important for us to start, but we don’t let it phase us. We battled back and just kept playing. I thought our forecheck was great today, which has not been there the last five or so games, so it was nice to see.”

(on rebounding from the previous two games…) “Personally it was probably the worst two games I’ve played in a while, the last couple. I just wanted to play and, as a team, I think we’ve talked about just getting back on the forecheck and moving our feet a little bit more and just getting the puck to the net. I thought we did that tonight.”

(on the 5-on-3 goal…) “Yeah. that’s something we’ve worked on a lot actually, just moving and not making them settle and let them adapt to us. When you’re moving it’s obviously hard to specialize a penalty killer. We just make them guess where we’re going to go with it.”

MICHAEL LEIGHTON
(on his first game of the season…) “Yeah, I wasn’t too nervous. I was just more excited to get out there. It backfired a little bit and the first goal was pretty weak. I definitely felt better the third period. (Goalie coach) Jeff Reese came in and told me I’ve got to start fighting for pucks more, and the puck gets back to the point and try to find it. I just found I wasn’t seeing the puck coming in. I really worked in the third and it seemed to help.”

(on his game…) “It was good to get back and obviously I’m not too excited about the way I played. We got a win and the team really saved my butt tonight and we did a great job. They scored some goals for me and that was that. I felt better the third period and hopefully I just build off of that.”