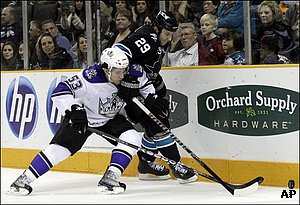 Yesterday, we talked about the development of young defensemen such as Davis Drewiske and Alec Martinez. It’s worth noting that the six current defensemen have an average age of 25.3. Even if you add 33-year-old Willie Mitchell into the mix, that only raises the average age to 26.4. Terry Murray was asked about the teaching process involved with the young defensemen and what aspects of their games are stressed, and how. What issues pop up during the development process of young players, and how are they corrected?

MURRAY: “It’s just feedback. When you don’t have a lot of quality practice time, like it is right now with the heavy schedule, it has to be like that. That happens in the team meetings. Then John (Stevens) pulls the defensemen aside, and he do the individual stuff and review their shifts on a 1-on-1 basis, which reinforces it again. The killer, to me, in sports is hesitation. In anything you’re going to do, if you hesitate you’re going to run into big problems. Certainly in a reactive sport like hockey, you’ve just got to be able to play the game. Trust your teammates, know what they’re doing and play the hockey game without a lot of thought put into it, really. You want that intensity in your game, to do the right things.”

“Our Anaheim game the other night, in the first period and even in the early part of the second period, we were trying to make plays standing still. That’s all we were talking about on the bench. `We’ve got to get skating, move our feet, get the puck, take ice.’ It was the same between periods, and carried through in the early part of the second period. You’ve got to skate. That is one of the first things that I’m looking at, with our hockey club, when we get started in the game. You cannot make plays standing still in this game. That’s one of the big issues with young defensemen. It’s simply neutral-zone tandem play, counters. You pass the puck to your partner, dot to dot in the faceoff circle in your own end, and if that defenseman doesn’t take a couple strides immediately, he’s dead. There’s going to be a turnover, and you’re now forcing the puck into areas instead of opening up options, two or three different options for yourself. You’re dead. So you have to skate. You have to move your feet. Those guys are doing a good job of that right now.

“It’s just habits, especially with young players. Repetition is the mother of skill. These young guys have been doing stuff over the last several years, and they’ve been able to get away with it, playing the game. It’s just the way it is. You have to take that part of the game and correct it, get it out of there, clean it up and make them play the game the right way. So I’m seeing good things, and that’s a huge difference in Martinez’s game from last year. He came into camp this year very confident with the puck, skating with the puck, carrying it. He was the point leader in Manchester, and that’s because he’s using his number-one asset, and that’s just moving, mobility, agility, skating. It opens up shot lanes and passing lanes. Now, what exposes a player the other way is, if you’re skating and opening up ice, does he have the vision? Is he a double-option, triple-option player? Now you see who he really is. That’s where Doughty is so great. He’s a third, fourth option guy. He’s an exceptional player. But he’s got to be moving. Early in the season, he was not moving his feet. Now he is, and now he’s starting to put the `A’ game up consistently.”