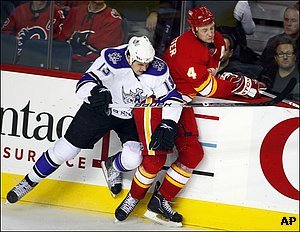 We’ve been following the World Junior Championships here, and it’s easy to forget that Kyle Clifford could easily be in Buffalo right now playing in that tournament. Clifford doesn’t turn 20 until next month, so he was eligible for the World Juniors — and participated in a summer training camp for Team Canada — but Clifford is now a lineup regular for the Kings, and there was no thought that he might leave and go play in the tournament. Clifford is developing into a reliable third-line winger who is praised for his work ethic. In the locker room, Clifford is friendly but quiet and respectful, and Terry Murray had great praise for Clifford’s attitude. Today, Murray jokingly talked about the Kings’ “plan” to keep Clifford away from Team Canad….

MURRAY: “We all felt he should have been selected last year and he wasn’t, so we decided to keep him so they couldn’t have an opportunity to get him this year. Take that. [laughs] Well, I’m glad he hasn’t come to me and asked if he could go. I would have been disappointed. He’s making great strides here, and he’s a great kid. It’s great to see the attitude that he brings every day to the practice. Going to the rink early, to get himself ready. Every game, he’s on the first bus. He’s just a rink rat. He wants to play the game and play the right way, and he wants to become a very successful pro hockey player for a long time. He’s doing all the right stuff, with his respect for the game, for the veteran players. He’s showing to us, the coaches, that he will do whatever it takes, putting in the work, the time, to keep our trust and keep it going on the ice.”