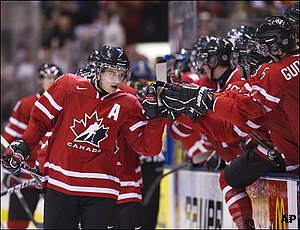 It’s been a good week for a couple Kings prospects. Today, Derek Forbort was named to the United States’ roster for the upcoming World Junior Championships, which start Sunday in Buffalo. Forbort, the Kings’ first-round pick (No. 15 overall) in this year’s draft, is a defenseman and a freshman at the University of North Dakota. Forbort has nine assists and a plus-3 rating in 15 games for the Fighting Sioux this season, and is now one of 22 players who will represent the United States in the World Juniors. Team USA opens the tournament Sunday against Finland.

Down the road, he might face Brayden Schenn, the Kings’ first-round pick (No. 5 overall) in 2009. Schenn (pictured right), who played eight games with the Kings this season before being returned to his junior team, is an assistant captain for Team Canada. Schenn scored a goal Tuesday night in Canada’s 4-1 exhibition win over Sweden. Canada plays a final exhibition game Thursday against Finland and opens the tournament Sunday against Russia. Schenn talked about his experiences with the Kings, and looked ahead to the World Juniors, in a Canadian Press story that you can read by clicking here.

Also, the Manchester Monarchs picked up their four consecutive victory when they beat Connecticut 5-4 in a shootout last night. Oscar Moller had two goals and one assist and scored in the shootout. Goalie Jeff Zatkoff allowed three first-period goals. Martin Jones came on at the start of the second period and stopped 12 of 13 shots for the win. Thomas Hickey had one goal and one assist and Andrei Loktionov had two assists.