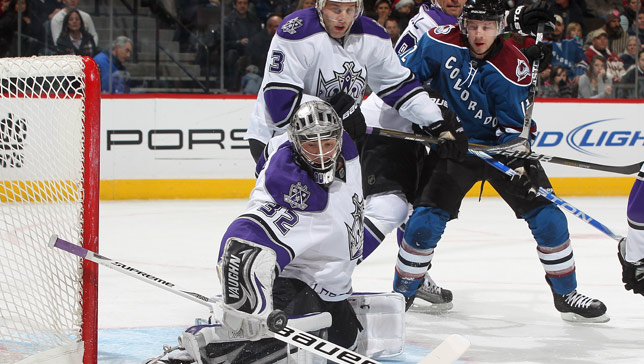 — The Kings were able to end their five-game road trip with a winning record as they beat Colorado 5-0 on Tuesday night.

— During the road trip, on which the Kings won three games and lost two, they outscored their opponents by a combined margin of 22-10. During the trip, the Kings handed the Avalanche and Detroit Red Wings their first shutout losses of the season, and also ended the point streaks of the Nashville Predators (8-0-1) and Avalanche (6-0-0).

— Colorado entered Tuesday’s game with 121 goals, most in the NHL, and had scored at least three goals in eight consecutive games. The Avalanche had been 7-0-1 in their last eight home games.

— Jonathan Quick recorded his third shutout of the season and his 11th career shutout. During the trip, Quick had two shutouts and one assist, for the third point of his NHL career.

— Brad Richardson had one goal. Four of Richardson’s five goals this season have come against Colorado, the team that traded him to the Kings in 2008. Richardson had a hat trick on Oct. 23, when the Kings previously played at Colorado.

— Justin Williams had a power-play goal. Williams has two goals in his last three games, after scoring only one goal in his prior 12 games.

— Drew Doughty had two assists. After going 10 consecutive games without a point, Doughty now has one goal and seven assists in his last five games.

— Anze Kopitar had two assists. Kopitar has six goals and seven assists in his last nine games, and the Kings have are 8-1-1 this season when Kopitar has a multi-point game.

— Ryan Smyth had one assist, and has four goals and one assist in his last six games.

— Marco Sturm made his Kings debut, played 11 minutes, 42 seconds, and was credited with one shot on goal and one hit.

— Anze Kopitar led the Kings with six shots on goal, while Trevor Lewis had three hits and Davis Drewiske had three blocked shots.

— Terry Murray recorded his 99th win with the Kings, in 196. In Kings history, the coach to reach 100 wins the fastest was Tom Webster, who did it in 211 games.