Second line: will it work again? 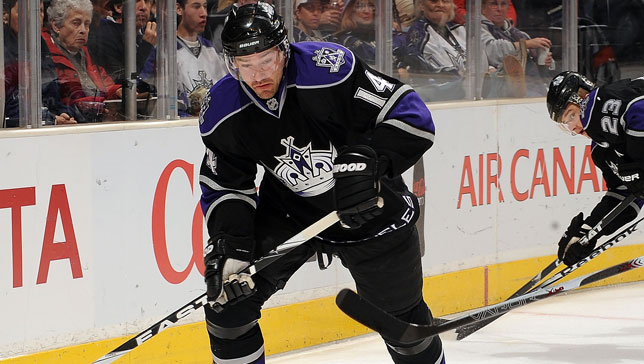 The likely debut of Marco Sturm tomorrow also means the likely return of the line of Ryan Smyth, Jarret Stoll and Justin Williams. That line was put together before the third game of the season, and over the next 21 games it was often the Kings’ best line. During those 21 games, Williams had eight goals and 13 assists, Stoll had seven goals and 10 assists and Smyth had seven goals and seven assists. In the final four games they had together, though, the Kings went 0-4 and the line did not score an even-strength goal, so Terry Murray made a move, moving up Williams to try to jump-start the first line. That actually worked out fairly well, but now Dustin Brown will go back to the first-line right-wing spot and Williams will go back with Stoll and Smyth. Sturm is likely to skate with Trevor Lewis and Alexei Ponikarovsky, but that will be determined tomorrow.

MURRAY: “The line, as we know, with Stoll and Smyth and Willy, was playing so well for us at the start of the year. I made a change for reasons. Right now, I feel that with players, Marco, coming back into the lineup, and we’ve got Richie back in, that I can make that change. Hopefully the chemistry is right back there again. I thought Willy was a big part of that iine, when they were playing well. He’s a puck-possession player who makes a lot of plays in the offensive zone, so I’m hoping, and i feel, that going back to that line, they should not miss anything. He will do his stuff, the line will start to click again, and now it gives me an opportunity to get Brownie back on the right side, to get prepared for Marco Sturm when he gets some games under his belt.”