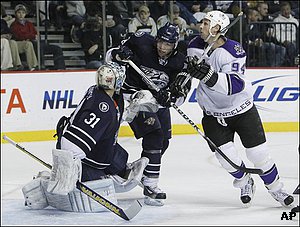 Following its 1-for-9 effort against Minnesota on Dec. 11, the Kings’ power play ranked 27th in the NHL in efficiency, at 14.4 percent. In the three games since, the Kings have gone 4-for-11 on the power play, a success rate of 36.4 percent. Three of the Kings’ last five power-play goals have come from the stick of Ryan Smyth, while Dustin Brown has a power-play assist in five consecutive games.

Smyth has three goals in his last four games, and each of them has come on the power play. Terry Murray has been stressing “net presence” on the power play, and perhaps no Kings player has a better net presence than Smyth, who regularly parks himself in front of the opposing net. That attitude and some fortune, led to Saturday’s goal, as Smyth hit the puck, then spun around looking for it as it got deflected and landed over the goal line. Smyth got the good-natured needle from Murray on that one.

MURRAY: “He got kind of a lucky bounce on the first one there, kind of a blooper over the top of the goaltender. [smiles] But when you start to put pucks to the net, and you’re just looking for good things, you do get lucky once in a while. I think we’re due for a little bit of luck on the offensive part of the game. We got that secondary scoring we’ve been talking about it, and we’re going to need it again going into Chicago.”