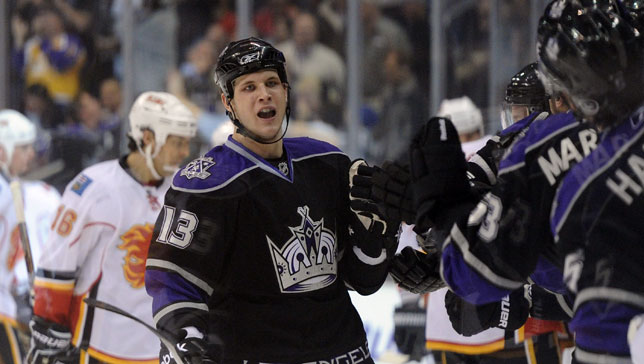 Terry Murray rarely hesitates to change line combinations, and after St. Louis scored its fourth goal last night, Murray had seen enough. He moved up Kyle Clifford, who was having a strong game, from the fourth line to the third line, swapping him with Alexei Ponikarovsky, who had drawn the coach’s ire since early in the first period. Depending on how you look at it, it’s a positive for Clifford or a negative for Ponikarovsky, or both. Clifford seems to be consistently improving at both ends. Ponikarovsky looked strong in his first two games after returning from a broken finger but has since fallen off. Murray indicated today that the swap — which apparently will carry over to tomorrow’s game against Nashville — was more about Ponikarovsky than Clifford.

MURRAY: “I wasn’t real pleased what was going on with the other player on the left side [Ponikarovsky], to be quite honest. It started right with his first shift, where the puck comes along the boards. It’s a play you’ve got to make. You’ve got to recover the puck and get it going on the breakout and get on the attack. We turned it over, and then spent another 15, 20 seconds in our D zone trying to go through coverage and recover the puck again. So there were just a couple situations like that in the early going of the game that needed to be looked at and changed.”

Clifford’s point production has also found some life. Clifford did not record a point in his first 19 NHL games but now has one goal and three points in his last six NHL games.

MURRAY: “It’s confidence. It’s a matter of hard work and staying on the puck, being real strong with your stick, recovering pucks, as it was on the goal that Simmonds scored. That’s just a very determined attitude, effort that, as a hockey player, you’ve got to have. Those are the plays you have to make, just to get in and get the puck stopped and try to recover. Now you’re looking to make plays. He’s obviously a young guy trying to do the right thing every shift, and I really thought that his fight that he had was a catalyst to get us going. We came back and got two quick goals and tied the game up. He deserved to be moved up and deserved more ice time.”