Can Moller make a big impact? 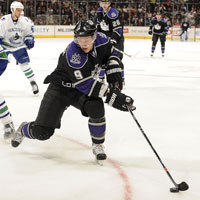 The Kings will start tonight’s game with the same forward lines, meaning Oscar Moller will remain the second-line right winger. Moller’s time to make an impact is clearly right now. Marco Sturm’s Kings debut is on the horizon, and he will step into a top-six role. That role is likely to be the one currently filled by Moller, unless Moller makes himself tough to replace. Moller got himself noticed with a big second-period goal against Detroit on Monday, and also tied the team-high with four shots on goal against the Red Wings. Terry Murray was asked today for his evaluation of Moller’s play…

MURRAY: “Oscar has been good. He scored big goal the other night, obviously. He’s a very courageous player for a smaller guy. He plays in the heavy going, he takes hits and he’s involved. He has the right idea, now, on angling. His body positioning and his D-zone coverage is much improved. There are other parts of the game, sometimes, that he gets drifting a little bit away from what needs to get done, but that’s a young player learning to figure out what the NHL game is all about on a consistent basis. But he’s much improved from year one, and he’s going to be a good player in the National Hockey League. There’s no question. We said, from the day we sent him down from training camp, that he can play in the league right now somewhere.”

And if Moller is going to continue to play with the Kings in the short term, Murray would prefer to see Moller on the wing, not at center, as the Kings believe Moller’s size (or lack thereof) gets exposed less on the wing.

MURRAY: “I do see him as a winger, yeah. I like big center icemen. Maybe it’s just my opinion. He can probably play center some places, but I think he’s more of a winger.”