Mitchell healthy, with a new look 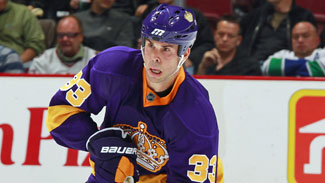 The wait is over for Willie Mitchell, who will go back into the Kings’ lineup tonight after missing the previous 14 games with a broken wrist. Mitchell will wear a small piece of protection on his wrist — it basically looks like an oversized wristband — for the next couple weeks, he said, and will go back into the lineup on the right side (alongside Jack Johnson) against one of the highest-scoring teams in the league, on the road. It doesn’t get a lot more challenging than that, but Mitchell is a 10-year NHL veteran, so it’s doubtful that he will be overwhelmed.

MITCHELL: “I think last week (tonight) started to be the target, just because of how I was feeling and what I was capable of doing. You guys watched, when I was out there practicing and stuff like that, but I really wasn’t comfortable yet, taking shots. The last couple days, I’ve started to take slap shots and one-timers and stuff like that. There’s still some pain there, but it’s bearable. Before it was kind of like putting your hand on a hot burner. But now it’s bearable and it’s time to get going. Hopefully I can just slide back in and find my game, the way I was playing, because I was starting to feel like I was starting to fit in, with my game, with the team. So I’ll just slide back in and try to do the things I can do to help the team.”

Question: And you’ll have Jack Johnson as a partner?

MURRAY: “He felt pretty good after the meeting with our doctor the other day, after our last game against Minnesota. He feels confident after some practice, battling, competing, shooting pucks. So he will be partnered with Jack Johnson here tonight.”