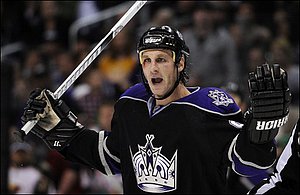 COACH TODD RICHARDS
(on the game…) “It was a gutsy performance by the guys. We took too many penalties, made it difficult on ourselves. And the penalties were the stick infractions. Those are the ones that drive you crazy. Theo made some big saves at some very key times and obviously we benefitted from some obvious miscues from their goaltender.”

(on the game-winning goal…) “Our power play at the end makes a play. Bouchard, who was setting guys up for one-timers. First time I saw him there, and I liked what I saw there, and O’Sullivan made a great pass out. It was a big-time performance from the guys.”

(on the play of Brent Burns…) “About a month ago, Burns’ game was really good and it looked like it had dropped off a bit. It looks like he’s starting to get it back again. He has the tools. The big thing is, when he’s moving his feet he’s a difficult player to play against. He skates so well. Once he gets his hands on you, you’re done. He was able to nullify a lot of plays just by using his stick and getting to the puck.”

(on his team’s shot blocking…) “As a coach, with the flow and emotion of the game being tied up, every time they take a shot you hold your breath for a second. And at the other end, it’s the excitement and the disappointment when it gets blocked.”

(on the game…) “You never know when the most important play is going to be. It might be in the first or second or third. Obviously the deeper you get into the game the more importance there is on each play.”

BRENT BURNS
(on the game…) “It’s nice to get a power-play goal against this team, since they’ve only allowed one at home. So we knew it would be a tough job. We killed a lot of penalties. It was a gutsy effort by everybody, everyone blocking shots and that makes it more fun.”

“It wasn’t an easy game. It was tough with a lot of battles. When you play on the road, you talk about those ugly wins and those make you feel a little better and I felt pretty good today.”

(on facing back-to-back games…) “Physically, we’re in great shape. I think a lot of guys run out of gas during back-to-back games. For the most part there’s no thinking. You go from morning skate and you just play. I think guys are at their best when they’re a little bit more relaxed. You know you have a tough job and there’s no thinking, you just do it and we got to bring it for another tough game tomorrow.”