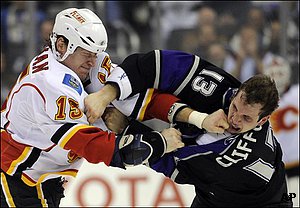 Some reaction from the Calgary locker room last night…

COACH BRENT SUTTER
(on the game…) “I wasn’t happy with the way we played. I thought as the period went on, the first period, we’d find our way, we got a little bit of a man in there and then it went away on us and they [Kings] came at us hard in the second period. We didn’t have any push-back at all in the second period. We had urgency in our game the last seven minutes of the game after we were down a couple.”

(on Miikka Kiprusoff’s play…) “Kipper played very well. He absolutely kept it close for us, to give ourselves a chance. Again, it was disappointing to see us play that way here tonight for the portion of the game.”

JAROME IGINLA
(on the game…) “Tonight, I don’t have a lot of answers. It’s been a hard last month. We’ve been trying to get back to .500, one game win, the next game not. It’s not like we don’t show up for the second. We just have to find a way to win that second game in a row. It’s been a hard month, the last four weeks, but at the same time the way the Western Conference is this year, you’re still not out of it. We still have to stay with it and believe that we’re going to string a couple together, because we’ve been .500 for the last 10, 11 or 12 games. It’s not good enough to climb back, but it’s these second games that unfortunately slip away from us.”

(on Kiprusoff’s play…) “(The Kings) outplayed us, especially in the first couple of periods. They were quicker and beat us to more pucks. Kipper was outstanding and gave us a chance, only being down one going into the third period. On the road, that’s not that bad of a spot. It shows that he’s a tough goalie in the league. He’s been like that for us all year, never gives up on any plays and is always very confident in there.”

MATT STAJAN
(on the game…) “It’s frustrating. Obviously we want to string together, we want to turn this thing around, and we can’t get over that hump right now. A break like that might help, but at the end of the day we have to play better for the full 60 minutes. That second period wasn’t very pretty on our end but Kipper kept us in it, gave us a chance at the end, but we have to do better for a complete hockey game.”