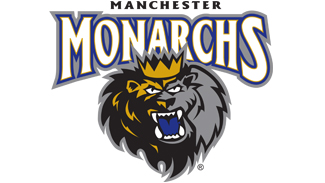 The AHL’s Manchester Monarchs don’t play again until Friday, giving them some time to digest an odd series of recent games. Entering today’s AHL action, the Monarchs are in first place in the Atlantic Division, with a 16-9-1-1 record, even though they lost two of three games this past weekend.

On Friday, the Monarchs lost to visiting Norfolk 7-2. Dwight King and Bud Holloway had goals, and goalie Jeff Zatkoff was pulled after the second period, after he allowed six goals on 21 shots.

On Sunday, the Monarchs lost 2-1 at Providence. Zatkoff stopped 45 of 47 shots, but the Monarchs got only Justin Azevedo’s third-period goal in the loss.

For the season, Loktionov leads the Monarchs with 20 points (four goals, 16 assists) in 17 games. David Meckler has a team-high nine goals in 26 games. Jones has played only 10 games but leads the AHL in goals-against average (1.52) and is second in save percentage (.947). Zatkoff has a 2.99 goals-against average and a .898 save percentage in 18 games.