The Kings are focused on Vegas' speed, plus a plan for the blueline - LA Kings Insider

The Kings are focused on Vegas’ speed, plus a plan for the blueline

The Kings returned to the ice this afternoon at T-Mobile Arena, for their final skate before tomorrow’s rematch against the Golden Knights.

In last night’s 5-2 defeat, the Kings were overwhelmed early by the speed that Vegas brought in transition. The result was an onslaught of odd-man rushes against Los Angeles netminder Jonathan Quick.

“Their speed overwhelmed us, that’s pretty evident,” Todd McLellan said after last night’s defeat. “The transition from offense to defense, their defenseman jumping into the rush, our D handling anything outside with any type of pace. We did a poor job, and it took us quite a while to adapt to it, and by then it was too late.”

As far as the players on the ice, they recognized the same types of things that McLellan did.

Alternate captain Jeff Carter said he felt that some of the pre-game adjustments the team made helped to kill plays in the defensive zone, when things were set up, as opposed to off the rush. It was those transitional plays that really hurt the team in yesterday’s defeat.

Cutting down on those “long plays” as Carter put it will be key in Sunday’s rematch.

“They’re a good team,” Carter said, after today’s practice. “I thought we made some adjustments prior to the game that helped us out in our own zone, killing plays early, but the long plays kind of ate us up a little bit last night, especially early. The first period, we gave up a lot of odd-man rushes and it’s something we’ll have to adjust to tomorrow afternoon. We’ll have to be a lot better for sure.” 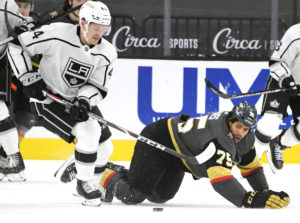 There’s only so much you can do in a day to adjust to that.

It’s certainly not like Vegas is going to magically get slower overnight, either. The Kings know that they will need to do a better job of handling that speed tomorrow afternoon, but how to do so is the million-dollar question.

“First of all, puck management,” McLellan said. “Coaches say this all the time, you hear it in every league, we’ve got to get pucks deep, make their D turn…they’re old clichés, but they really hold true when you have a team that transitions as well as [Vegas] does. There were numerous amounts of times last night when we turned the puck over, for whatever reason, and their eyes were already up ice, and they got the jump on us. There’s other areas, we pinched and had poor cover. D-men in particular need to know their range. They need to know the speed that’s coming at them and their own set of legs, their range, how far can I push this, how much should I be cheating to keep players to the outside. We can do a better job with all of those things.”

When it comes more specifically to the blueline, McLellan pointed to a group of younger players who perhaps did not know what was coming at them last night, though he said that even for some of the more veteran players, who should have known better, they did not handle the challenge as they should have.

The reality of last night’s lineup is that the Kings had three players on the blueline with 16 games or fewer of NHL experience, and four with less than 100. You can say “well just make a personnel change” all you want, but the reality is that those who could enter on the blueline in Mark Alt and Tobias Bjornfot have 20 and 3 NHL games respectively. There isn’t a magical train with veteran reinforcements joining the group, and it will be on those currently on the roster to match the task at hand.

This morning, McLellan added that then it’s not just one player, or one pairing, that struggled, and that can make things more difficult when it comes to making those changes.

“It’s a lot easier when it’s one pair, or maybe one player, but the group as a whole had a tough night with the pace,” McLellan said. “The reinforcements aren’t on the way, we have what we have and we’ve got to take the time to work with the defensemen and discuss what went wrong, how we can help them, put them in better situations timing wise, we spent some of the morning doing that. Being a defenseman, you need help as well from the forwards in certain situations and the goalie as well, he can help out a lot too.”

McLellan talked last night about how difficult it is to cut your teeth in the NHL, especially when so many young players are trying to do so at the same time. It’s one thing to integrate a younger player into a group of five veteran defensemen but doing so alongside 3-4 others in the same boat is a challenging task, especially against a team with the offensive firepower that Vegas has. 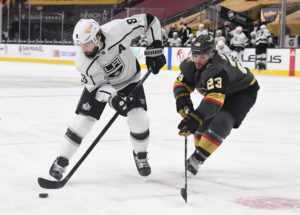 Looking ahead to tomorrow, McLellan did not commit one way or the other in terms of his lineup on the blueline. It’s safe to assume we won’t be seeing drastic changes – Drew Doughty aint going anywhere – but he acknowledged the pros and cons to making a potential lineup change for the matinee rematch.

“Directly, we’re juggling some things around, we’re talking about using maybe a different player or two,” McLellan said. “Then, the other consideration is with the players that played, they felt the pace, they felt the type of game that was thrown at them, so maybe it’s a good idea to use them again. I don’t know what the answer is at noon on Saturday, but we better know by noon on Sunday.”

It’ll continue to be a work in progress and we’ll see some ups and some downs as these young players continue to gain experience, trial by fire style.

The team did not release official line combinations today but indicated that all players who traveled to Vegas skated, except for forward Martin Frk. Frk left last night’s game with a lower-body injury late in the second period and did not return. For those inquiring, Dustin Brown was a full participant today, after he appeared to leave the game late in the third period. Matt Luff practiced in full again, and as McLellan alluded to yesterday, the forward should be ready to return to the lineup as soon as tomorrow. Luff was activated from injured reserve yesterday afternoon.

The Kings will not have a morning skate tomorrow, so we’ll get a better sense of tomorrow’s lineup closer to the noon puck drop.