Alex Turcotte is healthy and ready to go for Ontario Reign

It was just over 11 months ago, on March 11th, 2020 when the Kings signed Alex Turcotte to his three-year, entry-level contract. Set to report and join the Ontario Reign the following day, Turcotte’s first time on the ice as a member of the Los Angeles Kings organization wasn’t to be in 2020 as the NHL and AHL paused their seasons indefinitely as the COVID-19 pandemic hit on that same day.

Unjustly, Turcotte’s debut in a Reign or Kings uniform has still yet to be seen. But good things come to those who wait……and thankfully, the wait is no more. Turcotte, the Kings’ 2019 first-round draft pick (fifth overall) stepped on the ice for the first time as a member of the Ontario Reign yesterday.

In the roughly 11 months since Turcotte put pen-to-paper, a lot has changed for both him and the Kings organization. For the Elk Grove, Illinois native, Turcotte was able to spend the extended offseason putting on muscle and developing his skill set. And, while we haven’t had the chance yet to see that skillset in the black and white, we did get a sneak peek of Turcotte in the red, white and blue where he and Kings prospects Arthur Kaliyev and Brock Faber took home the gold medal at the 2021 World Junior Championship. On route to the gold medal, Turcotte centered the top line and recorded eight points (3-5=8) in seven games, tied for second-most on the squad.

As for the Kings organization, correlation or not, the Reign hired Turcotte’s former head coach at the United States National Team Development Program (USNTDP) in John Wroblewski. When asked about his comfort level going into this year compared to years past, Turcotte feels he’s in a good place.

“I would say I’m a lot more comfortable than last year,” he said yesterday. “Last year, I was a lot more nervous coming in. Having [John Wroblewski] again is great. I’m really familiar with him because he was my coach for two years at NTDP. It’s been really easy to get adjusted and I’m just glad to be back on the ice. I’m having a lot of fun.”

Until yesterday, Turcotte’s return to the ice had been delayed due to a lower-body injury that he sustained in the WJC gold medal game. Described as more of a “cautious” move to keep the center out of the AHL preseason games, Turcotte and the Kings prioritized a fully healthy body going into the Reign’s regular-season opener on Saturday.

“I didn’t want to miss any regular-season games and expect to get going right away,” he said.

Although Turcotte did not play in the Reign’s preseason, he did attend the games and has already been taking notes.

“In the AHL, I think the speed and physicality is more intense [than in previous leagues I’ve played in],” he explained. “In college, the speed and pace of play was pretty good but here it’s on another level. These are legit men and they are all trying to make it to the NHL. It’s more intense here than it is in college or juniors. Everyone is fighting for a spot and they all want to make their dreams come true.”

As Turcotte moves another step closer to a Kings uniform, the 19-year-old has his eyes on picking up where he left at the WJC when Saturday’s Reign season-opener comes around. When asked what his goals were for the first few months of the season, the Kings 2019 first rounder replied that he wants to keep his momentum rolling from a strong under-20 tournament and become a difference-maker at the AHL level.

“I want to continue where I left off from the world juniors – playing with speed, skill and going to the dirty areas,” he said. “I try to be a line-driver and make my linemates better. I think if I do that and work hard, we are all going to have success and the rest will take care of itself……Obviously, you want to get on the board and produce, but it all starts with how hard you work and how well you mesh with the team. If the team is doing well then everyone is going to have individual success. That’s all I’m focused on right now.”

It’s been just under a month inside the walls of Toyota Sports Performance Center in El Segundo and the quick learner in Turcotte is already building professional and winning tendencies.

“It’s about being ready every practice and every time you’re out there, that’s something I’ve taken away since being here,” he said, following his first official practice with Ontario. “It’s a livelihood atmosphere and it’s been great to learn. It definitely makes it more fun too.”

As for what’s to come, Turcotte is ready for the Reign’s season to start.

“You can see how intense everyone else is working in the AHL, they’re working their bag off,” he said. “That’s something I’ve really noticed. Everyone is doing everything they can to get the upper hand and that’s the great part about professional hockey. It makes it even more competitive and I’m a very competitive person. I live off of stuff like that and it makes me a better player.”

Turcotte and the Reign will open the 2020-21 AHL regular season on Saturday, February 6th, when they face-off at 7:00 PM against the Vegas Golden Knights’ new AHL affiliate, the Henderson Silver Knights. This will also be the Silver Knights inaugural season opener. You can catch all 40 Ontario Reign games this season on AHLTV. 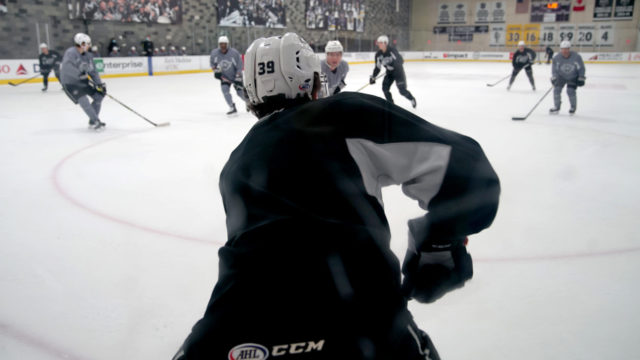