It’s been well documented that the LA Kings have taken too many penalties through two games this season.

The Kings rank fourth in the NHL in most minor penalties taken per 60 minutes (5.6) and as a team, they’re averaging 9:19 of shorthanded time per game, which is third-most in the NHL.

It’s not a situation where a couple of players are to blame – No one individual took more multiple penalties against Minnesota, but ten different skaters were whistled for one.

The Kings are a perfect 10-of-10 on the penalty kill so far, but even the best penalty-killing unit will concede eventually. Saturday’s game saw the Wild score a goal immediately after a Minnesota power play had expired, meaning that while the goal was not given up on the penalty kill, it was a byproduct of the penalty taken.

“We were exhausted at the end of that penalty kill, we couldn’t get a [full-ice clear] and we couldn’t get fresh people on, and it’s in our net,” McLellan said after Saturday’s game.

Looking at the makeup of the penalties against, two of them were too many men on the ice calls, and those, in McLellan’s mind are things that can easily be cleaned up.

“Line changes, too many men on the ice penalties, those happen during the year, but the ones that have occurred thus far, we can clean that up in two seconds by just being sharper,” McLellan said.

With regards to the other infractions, it’s a combination of mental toughness, and perhaps better positioning in certain situations as well.

Defenseman Kurtis MacDermid, though not a culprit in his season debut on Saturday, believes that by working on better positioning in the defensive zone, the team can cut out some of the unnecessary minors.

“It’s defensive positioning,” MacDermid said. “Making sure we’re on the right side of the other team to make sure that we don’t have to take those unnecessary penalties.”

We’ve addressed the situation at hand, and we’ve gotten some insight into what the problem is. Now, the million-dollar question is, how do you actually work on taking fewer penalties?

It’s not a systems issue, something where you can spell out the X’s and O’s, run specific drills during practice and correct the problem that way. Most penalties are about decision making, in split-second situations, and that isn’t as simple of an issue to correct.

There are different kinds of penalties taken so that it’s not a matter of one size fits all either when it comes to correcting the problem.

The Kings took those too-many men on the ice penalties in both games, and McLellan was less than thrilled with those infractions. He pointed the responsibility on those two occasions to the player going onto the ice and put the onus on them to correct those situations.

“The guy going on the ice is responsible for everything,” McLellan said after Saturday’s game. “The guy coming off is tired, he’s not sure where the play is. So, two nights in a row, I look at the guys that went onto the ice and it’s squarely on them. Pay attention, get your head in the game and be ready.”

While frustrating, those are strictly mental lapses. And, if data from last season holds true, too-many men penalties occurred approximately once every five games leaguewide, meaning that averaging one per game is not a sustainable statistic. The Kings were penalized for it just five times all of last season, and that will sort itself out.

It’s been the other minor penalties where the work has begun to start to make the corrections.

Talking with forward Gabriel Vilardi this morning, he attributed the abundance of penalties to mental mistakes, as opposed to physical ones. Vilardi made no excuses for the team’s penalty issues against the Wild and he and his teammates know that they need to be better heading into tomorrow’s game.

“Todd talked about it,” Vilardi said. “I don’t think there’s anything we can work on for that, it’s just mental. Two of those are from too many men, and that can’t happen. In terms of other penalties, we just can’t take as many penalties, it’s that simple. It’s tough to get into the flow of a game if you’re on the PK six times a night.”

Before the on-ice portion of today’s practice, McLellan ran the group through video, which he feels was an important opener before the skate.

“Perhaps the most important part of practice today was the prelude to it, the video and the review that we did the other night,” he said. “We looked at the good, the bad and the things we wanted to work on.”

McLellan also said that players are more apt to take penalties when they’re tired, which leads to scrambling at times. It makes sense. As legs get more and more gassed towards the end of a shift, players can lose the ability to do as much with their legs, which leads to more reaching and stick infractions.

To help to combat some of those situations, McLellan and the coaching staff did their best to extend certain drills during today’s practice to study how the players performed when they were on the tired side, aka replicating the end of a long shift.

He said that they looked at the players’ sticks and feet, and pointed out when they saw things they didn’t like.

“There’s moments in the game where taking penalties comes into play a little bit more, usually when you’re fatigued, and you’re scrambling,” he explained. “We can extend drills longer and longer, get them tired and monitor what they’re doing with their sticks, their legs, their arms and we barked about that. Quite frankly, it comes down to being mentally a little bit stronger and being engaged.”

While he admitted that it’s a tough thing to practice, he knows it’s an area for improvement, especially with the Colorado Avalanche and their dynamic man-advantage unit coming to town for two games.

The Avalanche dropped five power-play goals on the St. Louis Blues in their last time out, and have scored six of their nine goals so far this season on the man advantage. Last season, the Avalanche had more power-play opportunities than any team in the NHL, and they averaged a PPG per game during their run to the Western Conference Semi-Finals in the 2020 Stanley Cup Playoffs.

“With Colorado being a high-skilled team, lots of skill on the power play, that’s something that they use as momentum,” MacDermid said. “We want to make sure that we cut down on those penalties and not give them too many opportunities that way.”

The proof will be in the pudding come tomorrow, as the Kings face the challenge of stopping the Avalanche when they do get into those scenarios. Limiting their quantity of opportunities will be an important first step in finding success in doing so. 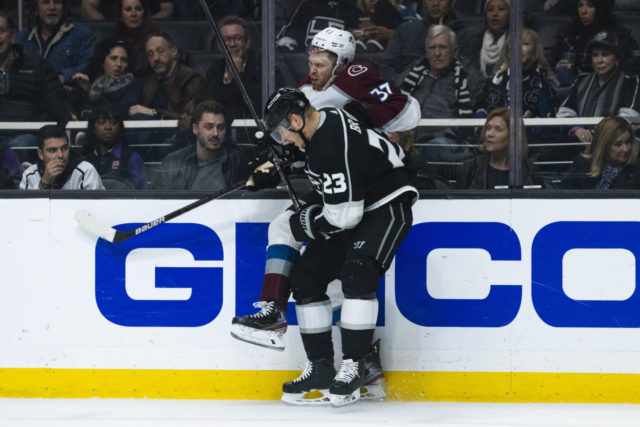