Evolution of secondary core a key for the Kings this season

The core members of the LA Kings remain in place.

The veteran group of five – Anze Kopitar, Drew Doughty, Jeff Carter, Jonathan Quick and Dustin Brown – have been teammates with the LA Kings since 2012, and continue to make up the core of the organization’s roster.

Behind that group, as recently as the last few years, once consisted of a group of players in the primes of their careers, offering support as a secondary core. Players such as Jake Muzzin and Alec Martinez on the blueline and Tyler Toffoli and Tanner Pearson at forward.

Those four players were all traded in recent seasons, and the Kings have begun to rebuild and recreate that secondary core, in hopes of supporting and distributing the burden from the veteran set of players.

“That group is a real important group for our organization now, and obviously in the future,” Head Coach Todd McLellan said. “We often talk about the young prospects coming, and the veteran five, but the group in between is huge. It’s really important that they grow in their game, that they give us more than they have in the past, and that they accept some of the leadership as we move forward.”

Now entering his fourth season, forward Alex Iafallo is ready to be a part of that group. During the 2019-20 campaign, Iafallo had a breakout season on the ice, as he set career highs in goals, assists and points, skating on the top line alongside Kopitar and Brown. 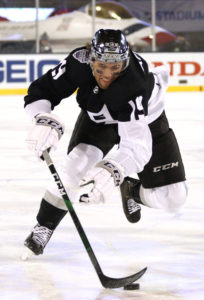 With that season now behind him, and a notable void ready to be filled, Iafallo is prepared to take on more of a leadership role on a team consisting of so many younger players.

“It’s important to help [the veteran five] out and make sure that we’re using the young guys and helping all the young guys out to reach their next level and improve their skills,” Iafallo said. “Myself, along with other second-core guys, it’s going to be huge and it’s going to help push the pace for us.”

McLellan has indicated that Iafallo is a player he trusts in all situations, even strength and 5-on-5 alike, and was complimentary of the progress he has made in their time together.

Alongside the Eden, New York native is Adrian Kempe, who also enters his fourth full season at the NHL level, his fifth in total. Kempe, a first-round selection by the organization in 2014, broke in with the Kings during the 2016-17 season and remained there on a full-time basis beginning in 2017.

Kempe tied his NHL career-high with 21 assists last season, and has broken 30 points twice in the last three seasons, but is still looking for that Iafallo-esque breakout campaign offensively. Kempe does, however, contribute on both special teams units and hasn’t had quite the consistency in linemates that Iafallo has.

In the final 10 games of last season, after Gabriel Vilardi was recalled to center Kempe and Martin Frk, the Kramfors native collected seven points. The trio has skated together so far during training camp, and Kempe feels that it’s now the time for him to make the jump from a younger guy to a part of the secondary core.

“I’ve played a couple of years here now, and I think it’s time for me and some other guys to take that next step and that leadership role as well,” he said. “Some guys are more leaders in the locker room and some guys are more leaders on the ice. For me, I try to be a leader out there for the team, when they need me, and I want to be able to change the game for our team in that way.”

Kempe was once that younger player himself, and with spoils of youth both breaking onto the Kings roster, as well as pushing for NHL jobs and playing elsewhere within the organization, there is certainly a need for more leaders in the room.

He knows the struggles that those younger players can face coming into the league, and believes it now falls on him, along with others in the new-look secondary core to help them out.

“There’s a lot of young guys on our team right now, so you want to show them and help them as much as possible too,” he said. “It’s fun to have some experience right now, and to be able to get the respect from the veterans as well.”

Kings captain Anze Kopitar believes that he has seen Kempe step into more of a leadership role, and thought he had a solid year last season, something he hopes continues.

When looking at that next group as a whole, Kopitar has faith in the group of players behind the veteran core, and wants to see them continue to become more consistent entering this season.

“There’s a couple of guys, I think Matty Roy made a big, big step last year, and Adrian Kempe I thought had a pretty good year last year,” Kopitar said. “Now, it’s a matter of doing it on a more consistent basis. We feel very strongly about our secondary core group, and with their growth, we’re going to become a better team.” 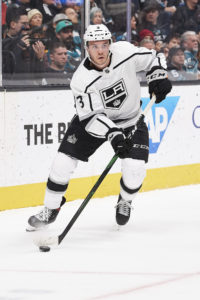 Speaking of Roy, his breakout season last year was surprising to many on the outside, but from those who followed his development and progression in the AHL, it really wasn’t surprising at all.

Roy has earned the “steady Eddie” distinction from McLellan, because you always know what you’re getting from him. He’s not the flashiest defenseman, but he’s grown his game in a variety of different ways.

People have begun to take notice – Roy earned an NHL All-Rookie Team vote last season – and his play has cemented his status on the right-side of the Kings blueline moving forward. While just in his second full professional season, Roy doesn’t think of himself as a veteran just yet, but feels he can use what he’s learned in the league to help younger players, such as his defensive partner Mikey Anderson, along.

“I wouldn’t call myself a veteran, but I feel that I have a lot more experience than I did last year, and I feel like I can help some of the younger guys here at camp and show them the way maybe a little bit more and take that next step as a player,” he said.

Alongside Roy in that ascension into the secondary core has been Sean Walker. Walker and Roy have had similar rises to the NHL. Both skated together on the blueline in Ontario in 2017-18, and the first-half of the 2018-19 campaign, before earning themselves callups that they haven’t looked back from.

While on similar trajectories, Walker brings a different skillset to the table, as an offensive-minded blueliner. With the Kings running four-forward based power-play units so far at camp, Walker has emerged as the quarterback of one of the two units, behind Doughty, highlighting his elite skating ability and offensive toolbox.

Doughty has belief in the group of defensemen he shares the blueline with, and highlighted Walker as a player he believes is primed for a breakout season.

“We really have a lot of belief in them, a lot of trust in them,” Doughty said. “Walks is a guy that I think can take off, he’s got all the offensive tools you need to be a really good offensive defenseman, I really think he can take off this year.”

Walker, who earned a four-year contract extension in the offseason, believes that he is ready to join teammates such as Iafallo, Kempe and Roy as a part of the team’s secondary core. All four players have gone through their lumps as younger players, and now need to take that next step to help guide other players along as they begin their time as NHL players.

“I think if you look, there’s a group of us in that range, that we’re in our second, third years but older than some of the young guys,” Walker said. “It’ll be a good gap between the younger guys and older guys, so I think think there’s lots of communication between eveybody and it should work well.”

The group of Iafallo, Kempe, Roy and Walker aren’t the only players who could make up this group. Austin Wagner, Martin Frk and Kurtis MacDermid signed multi-year extensions in the offseason, while players such as Olli Maatta and Andreas Athanasiou bring NHL experience to the Kings from other organizations. With younger players breaking in behind them, they will soon enough look to join a secondary core as well, as they gain more experience.

Regardless of exactly who composes the secondary core, it’s important for those players to emerge and step up behind the veterans. With a strong, older group in place, and the number-one ranked prospect pool in the NHL entering the fold, establishing that next group down will be key to the success of the team this season and moving forward.

“In any organization, the torch gets passed on down over time, and they have to be ready for it, both structurally and skill wise, and [in their attitude] to accept it,” McLellan said. “We’re counting on them, they’re important players.” 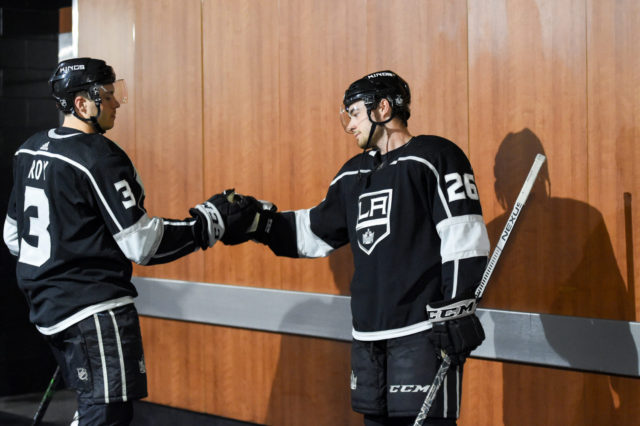