With Day 1 behind him, speedy Athanasiou looks to make his mark at Kings camp - LA Kings Insider

With Day 1 behind him, speedy Athanasiou looks to make his mark at Kings camp

“He hasn’t skated in 10 days or whatever since quarantining, and he was still the fastest guy on the ice, next to Wags.”

Andreas Athanasiou’s speed was on full display during his first day of training camp with the LA Kings.

It impressed his linemates – see Blake Lizotte’s observations above. It impressed those of us watching. And it has impressed many within the organization as well, even dating back prior to his official arrival at training camp yesterday.

In his media call to open training camp, Kings General Manager Rob Blake said that Athanasiou’s speed was the number one thing he looked at with regards to the forward, and it played a big factor in the decision to sign him.

“The number one thing is his speed, and the goalscoring ability,” Blake said. “It wasn’t as great a year last year, but the year before he put up a lot of goals. The ability to play both wings, a guy who’s played some games in the NHL also.”

Skating has always come naturally for the Toronto native.

He credited his training group and regimen over the summers as a contributing factor, while noting that his skating stride, and speed, is something he’s perfected over the course of his playing career.

“It’s something I’ve always worked on my whole life,” Athanasiou said. “As a kid, I was always pretty fast at what I did, whatever sport I was playing, so I always knew I had that fast-twitch. It’s always been a strong asset of mine, trying to be one of the best skaters, and I just continue to try and do that.”

Athanasiou is the newest member of the Kings, but for a player with more than 300 NHL games to his name, it didn’t necessarily feel like it. Sometimes, there can be a bit of an adjustment period integrating into the group for new players, especially with younger players, but for Athanasiou, the transition looked to be seamless.

“There’s a difference [with] a new player entering the team when you have NHL experience,” McLellan said. “He’s comfortable in the locker room, he’s comfortable around the veteran players. A lot of language that the Detroit group uses is language that we’re using, so he feels good in that area. He’s been able to be a part of our team meetings via Zoom while he was in quarantine, so we went through everything again today.”

It’s apparent why the Kings wanted Athanasiou. He scored 30 goals with the Detroit Red Wings just two seasons prior and, as Blake put it, his addition “makes a competitive group of young forwards that are vying for jobs here.”

For the player, however, he pointed to the group in place here with the Kings and the organization’s reputation as reasons for signing.

“There was a little bit of talk throughout the offseason,” Athanasiou said. “You’re looking at your options and this organization is top-notch, and the direction that these guys are all heading is something I wanted to be a part of.”

While signing the deal is perhaps straight forward, everything in the 2020-21 season has been different, and Athanasiou’s start with the Kings was no exception.

After agreeing to terms last week, the Toronto, ONT native traveled to Los Angeles, where he began his mandatory series of COVID-19 tests and quarantining. After meeting the necessary requirements and passing the needed tests, he was able to hit the ice with the group on Day 6.

While the rest of the group already had some camp skates under their belt, plus the preceding informal skates, Athanasiou was coming in cold turkey. He said that getting into the flow of things and finding his legs were key…..but was encouraged by the fact that he didn’t fall down on Day 1!

“Just trying to get those legs underneath you and get back in the flow of things,” he said. “I felt pretty decent out there. I’ve been off the ice for however long it’s been [while he was quarantining], but I felt good out there, as good as you can feel. I don’t think I had any toe-picks actually, so that’s a positive for sure.”

Lizotte and Carter both play the game with speed. Carter moves so well for a bigger-bodied player, while Lizotte’s speed and work-ethic on the ice enables him to move the puck quickly.

Despite not having much heads up on exactly who he’d be pairing with on the ice, Athanasiou did do some digging on his new linemates and feels they’ve already been able to gel quickly.

“I saw Carts the first day, he said we might be playing together, and it’s obviously exciting,” he said. “I think everyone knows how good he is and all the things he’s done. I’ve watched him a ton and I’ve done a little bit of research on Lizzy and I’ve been watching his goals and stuff. It’s just [about] building chemistry as quick as possible and there’s a lot of good pieces on that line. I think we had some good [chemistry] off the bat today and it’s only going to get better.”

As Athanasiou adjusts to a new organization, that includes working with a new bench boss as well.

Much of this LA Kings group spent last season learning how Todd McLellan operates, and vice versa. Now, the majority of players on the ice have a good feel for what McLellan expects out of his group, as well as the language and terminology that he uses to communicate.

McLellan indicated that much of the language that he and his staff use is similar to the language that Athanasiou was used to hearing with the Red Wings. He still noted though that picking up the routine with the Kings will be a big part of his transition process.

“Getting accustomed to how we do things and what we call certain things, systematic and structure parts to the game,” McLellan said, as one of the challenges facing Athanasiou as he joins the group.”

The former Barrie Colt had only been a part of virtual meetings with McLellan until yesterday, but he has already built a strong impression of the veteran head coach.

“You have someone like [Todd McLellan] running the team, and you know it’s going to be top-notch. He’s going to get the most out of the guys, and he seems unbelievable right now. I’m super excited. He’s helping me a ton already, we had a good video session this morning and we’re taking it step-by-step.”

As he enters what will now be Day 2 for him on the ice, Athanasiou is working diligently on getting himself back into the flow of things.

With now one full day under his belts, he believes that things are only trending upwards as he progresses through training camp, into his first seasons as a member of the Kings.

“We’ve all played this game our whole lives, it’s like second nature to us, it’s just like riding a bike,” Athanasiou said. “You get back on the ice and you get back into the flow of things as quickly as possible. Obviously, that first skate is going to be a little bit tough, but I thought it was pretty good out there and it’s only going to get better. 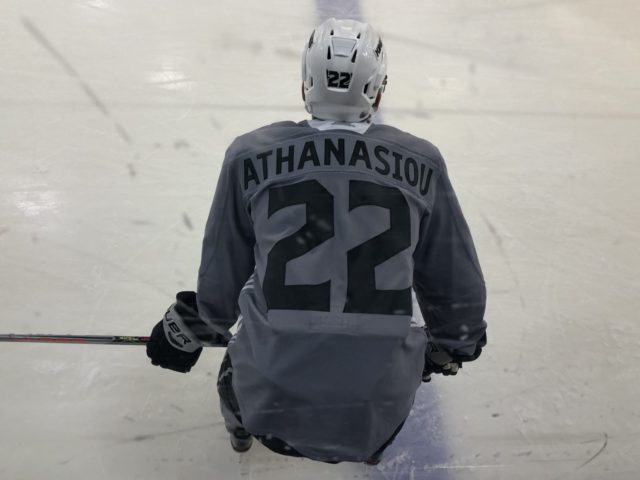