Insiders – Welcome to the first game day thread of the season…sort of!

Team USA was powered to the gold-medal game by LA Kings prospects. In last night’s semi-final game agianst Finland, the trio of young Kings got their team on the board as Turcotte scored his second goal of the tournament, with Kaliyev and Faber tallying the assists in the first period.

Fast forward two periods and five goals later, and the Turcotte – Kaliyev connection would find the game-winning goal. Turcotte collected a wrapped puck in the right corner of the offensive zone, pick his head up and find Kaliyev in the slot with a hint of space. From there, Kaliyev did what he does best, using his quick release to pick the top corner for the go-ahead goal inside two minutes to play in regulation.

“On Arty’s goal, I think someone threw it down low to me, and I just got the puck off the wall, started moving my feet off the wall and saw him wide open,” Turcotte said. “[That] usually is never really an option because everyone knows what a good goalscorer he is. My eyes lit up and I just ripped it to him and he had an unbelievable shot.”

On the play, with Turcotte and Trevor Zegras working down low, Kaliyev saw a pocket of space in the slot, where as Turcotte said he’s rarely allotted much time, and just tried to make himself open.

“I was just trying to get open there in the high slot – Turcs made a great play and I just shot it from there.”

Team USA Head Coach Nate Leaman knew that Kaliyev wasn’t missing from that area, with the quality of his shot.

“I don’t know if there are too many people who can finish that one like Arty did. It was a heck of a finish by Arty……he’s deadly. His shot is deadly. You saw his shot, there’s not many guys in the tournament who can make that shot.”

To put it simply, Team Canada is rolling. Through six games, Canada has yet to allow an even-strength goal, which is pretty wild honestly.

In terms of how the pair of Kings prospects have faired, Quinton Byfield has posted an identical scoring output to Turcotte, with two goals and five assists through six games. Byfield did most of his damage with a staggering six-point night against Switzerland in the preliminary round, where he was selected as Canada’s best player.

Slotted in the middle six throughout the tournament, Byfield was ready for his breakout performance on that night.

“I definitely found my footing and just been playing the same way, just trying to play hard and find the structure and everything just kind of happened tonight. I think [me and linemate Jacob Pelletier] had a good connection with some goals.”

Quinton Byfield with his first of the tournament on a terrific tip. That's his 4th point of the game.

Jordan Spence, meanwhile, has two games played, though one of the two he did not register a shift in (QF vs. Czech Republic). He made the most of the other game, however, as he opened the scoring in the first period with an early goal against Slovakia in a 3-1 victory. Though he has been asked to accept a lesser role in this tournament, the reigning QMJHL Defenseman of the Year has embraced it and was ready to go if his name is called tonight.

Spence is not expected to dress for tonight’s game.

With Kasper Simontaival and Finland winning the bronze-medal game earlier today, the Kings are guaranteed 6 medals from this season’s tournament. Simontaival finished the tournament with four goals, seven points and a +5 rating from seven games played.

Whether it will be three gold and two silver, or vice versa, remains to be seen.

USA – Canada is up next! 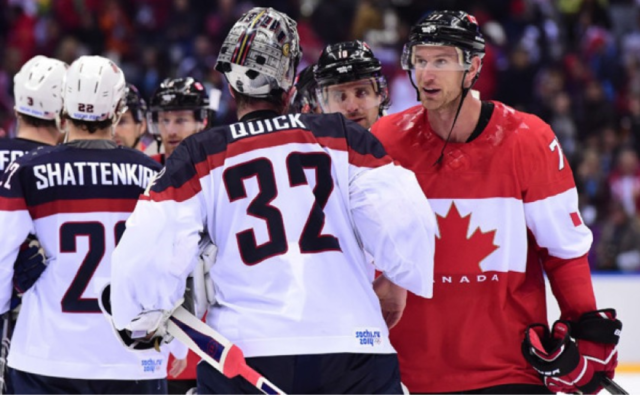