The LA Kings are on a new schedule today, with some new groupings, pairings and plans. On Saturday, Todd McLellan said in his media availability that he would be shaking up the groups starting with this morning’s practice. While Group A resembles what an NHL roster + taxi squad may look like, and Group B has more of an Ontario Reign feel to it, McLellan made it clear that these are not final decisions, or final placements.

“You’ll see the rosters, and you’ll go ‘jeez, Todd and the Kings management have made their decisions, that’s NHL and that’s development, American Hockey League type players.’ That’s not the case,” McLellan said.

Players may continue to be moved between the two groups, and additional changes can still be made. At this stage, however, McLellan felt that it was important to get a larger group on the ice at once to prepare for power play and penalty kill, as well as other game situations, that aren’t possible when the special teamers are in two separate groups.

Here’s how the groups shake out for today’s skate –

Group A Lines This Morning –

Per McLellan, expect to see scrimmage situations for Group A every day this week, in a controlled setting, including special-teams situations.

McLellan reinforced that these groups are not set in stone, and noted that changes to these setups could be made on a day-to-day basis.

“If you’re in Group A and you think you’re on the National Hockey League team you’re dreaming right now, because we’re nowhere near making decisions final,” McLellan added. “If you’re in Group B, and you feel like you’ve been released and you’re stuck in the American League then shame on you, because that’s not the case. We will move players around, depending on what we’re working on day-to-day. We legitimately could have a 29-man roster, when you think about 23 and 6 on the taxi squad. If somebody ends up being a little disappointed, and is dragging their lip a little bit, it’s probably going to cost them in the long run. I don’t think that will happen, but you never know.”

Starting today, Group A is scheduled to take the ice at 11 AM, with Group B slated to follow at 1:30 PM. More to come later on! 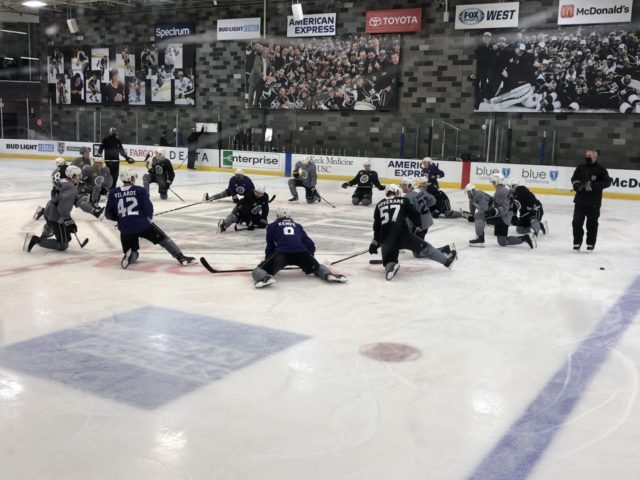