LA Kings Alumni – So many memories, so thankful During the Holiday Season, the LA Kings Alumni Association department reached out to several former Kings players, asking them these two questions:

1: What is your favorite moment with the Kings?
2: What are you most thankful for?

From big goals, to playing with future Hall of Famers, to fun on the road, our former players weighed in-on a variety of topics before they hung up their skates. And now, post playing career, they have so much to be thankful for.

Insiders – What are your favorite moments from these players?

Gene Carr (1973-78)
1 – I am most thankful for being Rogie Vachon’s roomie for over four seasons. I became great friends with one of the classiest guys I have ever known.
2 – Thankful for having so many great friends in Canada and in the U.S.

Jeff Chychrun (1991-92 and 1992-93)
1 – I always loved the celebrity guests we had post game in the locker room! One that stands out is the visit from President Ronald Reagan and his wife, First Lady Nancy Reagan. Quite a humbling moment in my memory.
2 – Most thankful this season for family, friends and heath.

Adam Deadmarsh (2001-04)
1 – I was fortunate to have many fond memories as a King, but I would have to say my favorite is when we knocked Detroit out in the first round of the playoffs.
2 – I am most thankful for the health and well-being of my family as the holiday season approaches. Even though I am not able to spend a lot of time with the extended family during these times, simply knowing that everyone is doing well is what I’m most thankful for.

Peter Dineen (1986-87)
1 – Rogie Vachon giving me an opportunity to play my 1st NHL season after spending five years in the AHL. Also playing with a couple of true Hall of Famers in Dave Taylor and Marcel Dionne.
2 – Living in the Adirondacks and that all my family has stayed healthy and safe during these trying times.

Colin Fraser (2011-14)
1 – My favorite moment as a member of the Kings was 2012 and the final few seconds of Game 6 vs New Jersey. Watching the clock tick down and celebrating the first Kings Stanley Cup was a surreal moment. One that can’t be matched!
2 – Health and happiness with the entire family is what my wife and I are most thankful for. Crazy times right now and a lot of uncertainty has us thankful our three children are a healthy and happy crew! 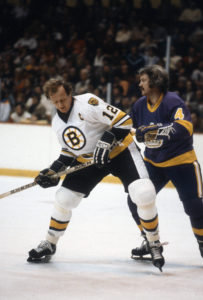 Photo by Focus on Sport/Getty Images

Randy Holt (1978-80)
1 – My favorite moment turned into two years of being able to play with and watch the Triple Crown Line dominate every team we played against. If only the rest of us could have done half the job they did, we would have been champions.
2 – I am very thankful that my children and their children are all healthy and happy.

Dean Hopkins (1979-83)
1 – My favorite time was when we eliminated the Edmonton Oilers in the Edmonton Coliseum in April 1982!
2 – I am most thankful for the good health of me and my family.

Brent Hughes (1967-70)
1 – Favorite moment was playing my first game at the Forum as a defenseman in front of Terry Sawchuk.
2 – Most thankful that my family and I remain healthy during this terrible pandemic.

Kelly Hrudey (1988-96)
1 – My favorite memories would be the 1993 playoffs.
2 – I’m most grateful for all the kindness in the world. With the pandemic and so many people affected in a variety of different ways, it warms my heart to see so many people helping others in these stressful time.

Ted Irvine (1967-70)
1 – Favorite moments are always my teammates and experiencing playing in the NHL and representing the LA Kings. Also scoring the overtime goal versus Oakland who broke a record from the 40s.
2 – Thankful for family friends and to have lived my dream of playing in the NHL. Merry Christmas, Kings Fans! 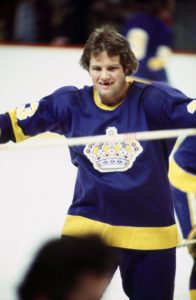 Chris Kontos (1987-89)
1 – 1989 after finishing my season in Switzerland, I got a last-minute call to join the Kings by signing a contract just before Midnight and sending it over to Rogie. It just made it in. I sent it back then from a lumber yard with a fax machine. I then went on to have a great playoff and we came back to defeat the Oilers after being down 3 games to 1.
2 – Happy that my family is safe and healthy during these chaotic times. We may not be able to get together but health is the most important thing for sure.

Jerry Korab (1979-83)
1 – Well I actually have a few memorable moments with the Kings. Obviously though the most exciting & one that I will never forget would have be the Miracle on Manchester and remembering Daryl Evans firing a rocket off the faceoff and winning the game in OT & defeating the Oilers!
2 – I always look forward to the holidays and am very thankful that I will be here to celebrate them especially with my family. I would just like to wish all my teammates in LA the same, especially my good friend Pete Demers.

Mike Krushelnyski (1988-91)
1 – In my 1st year being part of the LA Kings, eliminating the previous Stanley Cup champions in the playoffs was quite special for me and I felt as a team we were beginning to blend together and become a Stanley Cup contender.
2 – This year was certainly a challenge for all of us but I’m most grateful our family – my Aunt is 98 yrs old and Father at 90 yrs old and All the Family are still here and healthy.

Ian Laperriere (1995-04)
1 – My favorite moment has a King…I will say all 8-plus years I spent there. One of my favorite moments was 2000-01 playoffs and beating Detroit the way we did was so special.
2 – Thankful for my family, and very thankful that my family is safe in these crazy times.

Morris Lukowich (1985-87)
1 – It is a long story. But November of 1985 I had been released on waivers by the Boston Bruins and the LA Kings had picked me up…so on December 31, 1986 I was very motivated to play a good game and beat the Big Bad Bruins!! Let’s just say, after the game we went for a Kings New Year’s celebration to the home of the first Tarzan, Johnny Weissmuller, (then staged as a rental party home) and had a tremendous party…winning is so much fun!!
2 – I am most thankful for my Family and our good health at this Covid crazy Christmas time. There is my wife Eva (met Eva when I played for the Medicine Hat Tigers in 1975). We have been married 38 years and we have a beautiful 16-year young daughter Zoe, who is an amazing singer and dancer. Life is good!!

Markus Mattsson (1982-84)
1 – The two most important favorite moments of the Kings are: The birth of my son during a home game on February 26, 1983. Also, stopping Wayne Gretzky´s scoring streak is truly an amazing memory.
2 – I am very grateful for everyone working to create the vaccine for the COVID-19 virus.

Al McDonough (1970-72)
1 – On a flight from LA to Detroit, I took off my shoes and fell asleep. When we landed, I woke to find I no longer had shoes. One of my teammates, Gilles Marotte, had taken the rookies shoes and I had to walk through the Detroit airport and to the team bus, which was parked in several inches of snow, in my socks! Lots of laughs for the veterans! All part of a rookies first year in the league. Lots of fun and now memories. Gillo was a character!
2 – My health, the health of my family and Zoom! 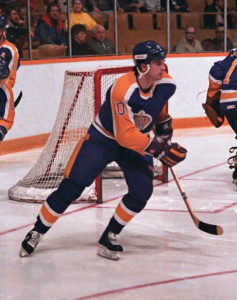 Sean McKenna (1985-88)
1 – No real one moment but great teammates and having the opportunity to play my favorite sport with some of the best players who ever played the game.
2 – I am thankful for my fantastic family. Wife, Daughters, Grandchildren, Son in laws as well as friends.

Willie Mitchell (2010-14)
1 – Outside the obvious of winning in 2012, my Dean Lombardi sit down meetings
2 – Vast wide-open spaces to adventure in while living British Columbia. Health is the Greatest Wealth!

Bill Mikkelson (1971-72)
1 – Favorite moment: My first NHL game when I was called up from the Springfield Kings in November ’71 to play with the Kings at Maple Leaf Gardens against the Leafs.
2 – Most thankful for: My family and their good health and well-being.

Hartland Monahan (1977-78)
1 – My favorite moment with the Kings was scoring two goals against the Toronto Maple Leafs back to back. Even better was playing on a team with Marcel Dionne. He is a super nice guy.
2 – Today I am most thankful for my family. I have three grown children and nine grandchildren. We are blessed to live in Hilton Head Island, SC. Slower pace of life and I play a lot of golf. Most importantly I am thankful for our Lord and Savior – Jesus Christ. He is the Reason for the Season.

Jim Murray (1967-68)
1 – Meeting all the original LA Kings, especially Terry Sawchuk; and walking into the Fabulous Forum.
2 – Most thankful for, that all my family is healthy and enjoying the festive season even with the COVID 19 being strong in our area. 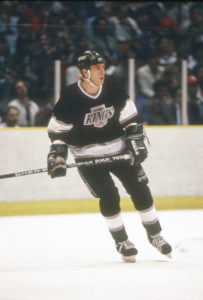 Photo by Focus on Sport/Getty Images

Bernie Nicholls (1981-90)
1 – Beating the Edmonton Oilers in the playoffs in ‘88-89 with Gretz on our team. Game 7 at home in the Forum was amazing.
2 – Most thankful that my daughter gave me my first grandchild, Rhett a baby boy in August.

Poul Popiel (1967-68)
I – It was an honor to be a drafted member of the Los Angeles Kings. I was also the first Danish born to play in the NHL. Plus, scoring my very first goal was in an NHL playoff game in game 7 though we lost to the North Stars ay home in the Forum with Terry Sawchuck in goal for us. Also, thanks to the LA Kings for inviting the “original L.A. Team drafted” for a reunion of the guys a few years ago. Definitely a first-class experience.
2 – I do hope and wish for people’s good health around the world — I’ve lost a sister-in-law to COVID-19 which must be eradicated so we can get back to a normal living environment.

Robyn Regehr (2012-15)
1 – When Alec Martinez scored the Stanley Cup clinching goal in OT in 2014.
2 – Health and Family are what I’m most thankful for this holiday season.

Larry Robinson (1989-92)
1 – My favorite moment was going on the ice to drop the opening faceoff with my twin grandsons as part of an LA Kings anniversary night in 2016.
2 – I look forward this holiday season to a safe and healthy life and a successful vaccine for this terrible pandemic.

Gary Shuchuk (1992-96)
1 – Scoring the Double OT Goal in the 1993 Stanley Cups playoffs will always go down as a favorite moment but also being able to share in a part of history when Wayne passed Gordie Howe as the all-time goal scorer with goal number 802.
2 – I’m very thankful that my family and friends have been safe and healthy during this crazy pandemic.

Lorne Stamler (1976-78)
1 – Eating dinner at Rogie Vachon’s house as a rookie and scoring my first goal in the NHL.
2 – Most thankful for my wife and the good Lord taking care of us and His continued support.

John Tripp (2003-04)
1 – Favorite moment was being able to play along with Lucky Luc. I learned a lot from him, especially his pregame routine and how NOT to tape a stick!
2 – Being in back in Canada for the holidays which has also allowed us to grow roots and enjoy friends and family on a regular basis. As players we don’t always get that opportunity. The kids have gotten to learn their family members much better and having babysitters nearby helps!