Without LA Kings hockey in our lives for the last eight months, it’s fair to say we’ve all needed to find some new ways to occupy our time.

In that sense, Kings goaltender Cal Petersen is just like us.

Where he differs, however, is that while we’ve been playing more video games or listening to new podcasts, Petersen saw an opportunity to accomplish something he otherwise may have waited some 10 years to achieve.

The Kings netminder spent an accelerated fall semester at the University of Notre Dame, where he took nine……NINE classes simultaneously to achieve his degree in Management Consulting from the Mendoza Business School.

When he left school early to sign an entry-level contract with the Kings back in 2017, Petersen knew that one day he would go back and finish his degree. He took some online classes each summer and knocked out some electives, but in normal times finishing the full degree was likely to be a post-playing-career project.

As we know, however, 2020 has been far from normal times.

As the Waterloo, Iowa native explained, his program only offered many of the courses required for his major in-person, and typically only during the two main semesters, fall and spring. As a professional hockey player, that would have proven to be problematic in a standard hockey calendar, but the delay to the 2020-21 NHL season opened up an unexpected window.

“It was something that I thought I would only be able to do when I was done playing,” Petersen said. “They did an accelerated semester, and with the uncertainty of COVID and when the season was going to start, I thought it would be a good time to go to Notre Dame and take as many classes as I can, see if I can graduate, and at the same time, be able to train there.”

WRITER’S NOTE: If you count the semester that I added a golf elective to my schedule, where we hit foam golf balls in a field for a half hour once a week, the most classes that I ever took in a semester was six. Taking nine classes at once, with many of them being higher-level business classes is a huge undertaking. 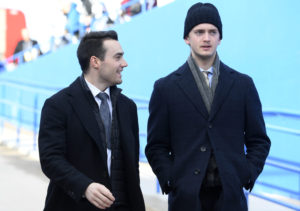 Having the loaded schedule that he did required an exemption from the school just to be allowed, as it would normally be considered too heavy for students to take in a single semester. Throw in the fact that he was training as a professional goaltender as well and that is truly a full day’s work.

“I was able to get some exceptions to be able to fit every class I needed into this semester, so I’d be able to graduate, which worked out super well,” Petersen said. “It just made for really busy days, I was going to class from 9 AM to [almost 4 PM], and then I’d go workout and skate, so it was a pretty busy scenario when I was there.”

Petersen was joined in the venture by former Notre Dame teammate and current Buffalo Sabres prospect Andrew Oglevie. Oglevie, who has spent the past two seasons in the AHL with the Rochester Americans, had similar thoughts and Petersen was able to live with a former teammate in South Bend while both players worked on their education.

Knowing that others in his position had gone back at some point – Petersen cited current Islanders captain Anders Lee, as well as Bruins forward Anders Bjork as good examples – he had a couple of former Irish players to lean on. Another key factor in the process was something that started back in 2017, when Petersen originally chose to forgo his senior season to begin his professional career.

Notre Dame has a policy of honoring an athlete’s scholarship, even if they leave early, to encourage all players to eventually return and complete their degrees, regardless of sport. Knowing that he had the ability to go back when the time came was big for Petersen when he originally decided to leave and it made things that much easier when he was able to return sooner than expected.

“When I was leaving school after my junior year, I wanted to have the scholarship still be honored so I could finish, and they granted it right away,” he said. “Notre Dame is really big on making sure that if guys leave early to play pro, in whatever sport, that you come back and finish your degree. They were really helpful on that side of things.”

While the degree was the primary focus of his return to Indiana, the training benefits of having a division one hockey program on campus certainly wasn’t a bad perk.

During a time when everyone was in search of ice and training facilities, Petersen was fortunate enough to have both on campus, along with a slew of high-level players and coaches to skate with. 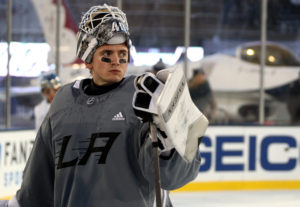 Due to COVID-19 protocols, Notre Dame ran informal split sessions before the team got in-season, and Petersen, titled as an assistant coach, said he was able to get on the ice as an extra goalie in certain sessions, usually in the afternoons. Once the team got back to full force, he would skate in the morning, before class, with Oglevie and players looking for extra ice time. The use of technology allowed him to connect these skates with the coaching staff in Los Angeles, despite being more than 2,000 miles away.

“We would do goalie drills, some different skates and I was getting them all videoed, so I would send them to Billy [Ranford] and Matt [Millar] here, and they could watch over the clips,” Petersen said. “Once a week or so we would hop on a zoom call to go over the clips and keep working on stuff.”

“It took a few sessions for Bill to figure everything out and we could watch everything simultaneously,” he joked. “But by the end of it we were pros.”

As his Notre Dame journey ends, more than eight years after he originally committed back in October of 2012, Petersen leaves as an established professional goaltender with a degree in hand.

Way back when, the educational value of Notre Dame was a principal reason why he committed to the Fighting Irish. Now, as one of the program’s top on-ice graduates, with a top-notch education, the decision feels fully validated.

“Going to Notre Dame, you get the best of both worlds in terms of academics and athletics and I think that almost every athlete that goes there says the same thing,” Petersen said. “That was a huge draw for me. Everything they do revolves around excellence, doing things first class. It always started with academics and goes into athletics, specifically with the hockey program, I think every year they’ve gotten better. It was just a perfect situation in that regard.”

As we look ahead, the NHL’s start date is still up in the air, though January 1 remains the public target. Petersen finished his classes in mid-November and is now back in Southern California awaiting the eventual start of training camp.

His final activity as a college student is scheduled for somewhere in mid-May, with an official graduation ceremony. Walking across that stage would be a cool way to end the journey, but the 26-year-old netminder hopes to still be playing hockey by that point in the year, which would make his attendance be strictly virtual, which the circumstances could dictate regardless.

No matter what his graduation plans turn out to be, though, Petersen took what has been a sticky situation for so many and found a positive.

“It was kind of a silver lining in a lot of respects, being able to get back to Notre Dame,” Petersen said. “It was one of those things that never would have happened if we didn’t have to go through this situation, and it presented a unique opportunity. I’m just really glad I took advantage of it.”

Take advantage of it he did. And now, he has the degree to show for it. 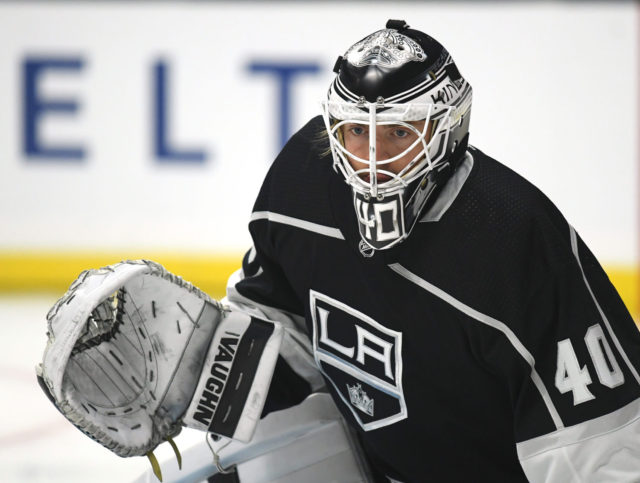