The LA Kings announced earlier today that the organization has re-signed forward Boko Imama and defenseman Austin Strand to one-year, two-way contracts for the 2020-21 season. The deals for both players carry an AAV of $735,000 at the NHL level.

The 6-1, 220-pound Imama who recorded 14 points (4-10-14) and 134 penalty minutes in 50 games last season with the Ontario Reign, as he set AHL career highs in games played, goals, assists, points and PIM. Imama led the team and ranked second in the league in penalty minutes.

Imama took a step forward in the 2019-20 season and put together, by far, the most productive year on his entry-level contract. The 24-year-old winger was a regular in the Reign lineup, skating in 50 of 57 games played before the cancellation of the season, and brought a hard-working, physical presence to the team’s bottom six. While the toughness and ability to fight remained from previous seasons, Imama was also a noticeable player on the forecheck and contributed not only a regular shift, but also more offensively than he had in seasons past. A good sign of progress, and a player who brings some valued elements on what is likely to be a young Reign roster this season.

Strand, a Calgary native, totaled 15 points (8-7-15) in 41 games last season with the Reign, which is tied for second among team defensemen in goals. The 6-3, 220-pound defenseman native has totaled 33 points (15-18-33) in 84 games over the past two seasons at the AHL level along with three points (1-2-3) in nine games with Manchester (ECHL). Strand’s 15 goals are tied for fourth most in Reign franchise history by a defenseman, with his 33 points tied for seventh.

Signed by the Kings as a free agent on Nov. 27, 2017, the 23-year old played for four seasons in the WHL with the Red Deer Rebels and Seattle Thunderbirds where he totaled 122 points (40-82=122) in 268 regular-season games. His junior career was highlighted by a WHL Championship in 2017 with Seattle and back-to-back appearances in the Memorial Cup with Red Deer in 2016 and Seattle in 2017.

Strand, a right-shot defenseman, bring high-level offensive tools to the Reign backend. The big defenseman has a heavy shot from the point and has put substantial work in over the last two seasons and getting that shot off quicker, and more accurately, from the right point. The result has been 15 goals in two seasons with the organization. Strand has puck skills that you don’t typically see in a player of his size, but has also faced challenges in adapting to the professional game in the defensive end, which is where his greatest room for improvement still lies. Similar to Imama, Strand is a player who took steps forward in the 2019-20 season, and will look to cement a larger role within the organization in 2020-21.

Strand and Imama were the team’s final two restricted free agents. Matt Luff and Mikey Eyssimont signed one-year deals with the Kings earlier this month, while Sheldon Rempal (signed – CAR), Chaz Reddekopp and Cole Kehler were not qualified by the Kings. 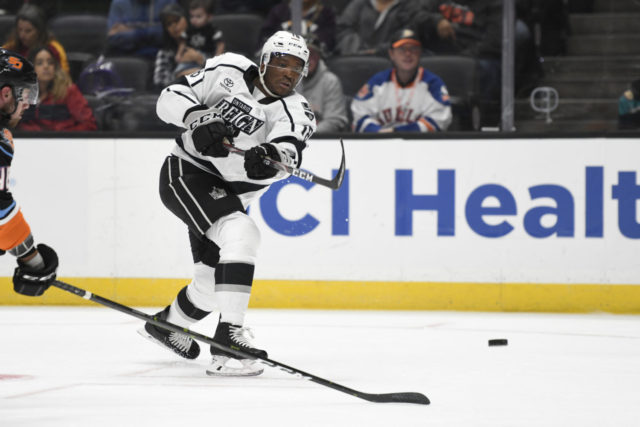