The LA Kings have signed forward Quinton Byfield to a three-year, entry-level contract, as announced by the team earlier today.

Byfield was selected second overall in last week’s NHL Draft, the Kings’ highest selection since Drew Doughty in 2008. Byfield was also the highest-selected Black player in NHL history, surpassing both Seth Jones and Evander Kane, who were each selected fourth in their respective drafts.

Byfield quickly became one of the highest-rated drafted players in the NHL, recently ranked as the second-best drafted prospect to not reach the NHL by The Athletic’s Scott Wheeler. The selection of Byfield last week, along with the rest of the team’s selections, vaulted the Kings towards the top of most draft rankings around the industry. 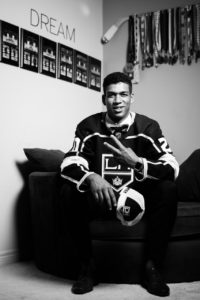 The Newmarket, ONT native was an offensive dynamo in the OHL last season, as he tallied 82 points (32-50-82) from 45 games played with the Sudbury Wolves. Byfield led his team in points and assists, while ranking second in goals. With 1.82 points-per-game in the OHL, just three players across the entire league ranked higher in the category, amongst players with at least 40 games played.

With the Kings, Byfield will wear #55 as confirmed by the team. 55 has been worn by just five players in Kings history, most recently Jeff Schultz in 2016 and former top-five overall selection Brayden Schenn in 2010.

Quinton Byfield on signing his first NHL contract
It’s an honor to have signed my first NHL contract with the LA Kings. It’s been a lifelong dream to play in the NHL and knowing I’ll be doing so with such a great organization in LA is even more exciting.

On his thanks and recognition
This is something I’ve been working towards my whole life and it doesn’t happen without all the support and help from my family, friends, the Sudbury Wolves organization and so many others. I’m so thankful for everything everyone’s done for me in helping me become the player I am today and honored to officially be a part of the LA Kings.

On his focus for next season
Obviously, the goal is to play in the NHL and this contract is another step towards that goal. Now, it’s just about staying focused and continuing to train and prepare so that I put myself in the best position possible for training camp.

Quinton Byfield on his initial reactions to being drafted
I don’t [usually] get too nervous, but I was pretty nervous and really excited for this moment, you’ve been waiting for it all your life and realize it’s finally happened. Celebrating it with my family, it was super special and just cherishing that moment, I was just super excited but also nervous at the time.

On what he knows about the LA Kings coming in
The LA Kings, I know they have a lot of star power players, they were a championship caliber team as you saw in the past, and I think I can bring to the table and get that team back on track. I think we have a really good team and I can’t wait to join them.

On how he would describe his own game
I think I’m a big, speedy center. I can find my teammates, usually a pass-first guy, but I’m not afraid to take the shot. I can use my size to my advantage to beat a defender, or I can use my hands as well and either beat them on the inside or the outside with my speed and strength. I can really take it to the net, and I think that’s what I can really bring offensively to the table.

On his NHL readiness
I’m a pretty confident guy, and I have a lot of confidence in myself. I definitely think I can step into the NHL next year, but I know it’s a really big jump from the OHL, and very challenging. Coming from every league gets harder and harder, and it’s playing against and with the best players every night. It’s definitely going to be really challenging, but my whole offseason I’ve been working with pros quite a bit and it’s helped me to translate easier.

Rob Blake on Byfield’s size, and selecting him second overall
Yeah, obviously size comes into play, I think [Byfield] was measured at six-four-and-a-half, pushing six-five. He’s a big center and the effect he can have on a game, all those things come into play. It was a good healthy debate amongst our staff for numerous months, preparing and looking over things. We’re excited about our pick.

Rob Blake on Byfield’s ability to play in the NHL right away
Well, physically, I think he has the ability to step in and play in the NHL with his size and his skating ability. Now, there’s a lot more that goes into it. The uncertainty on the games, when we’re starting, what will happen in the OHL where he’s currently playing, the World Juniors. I would say, all of the players drafted at that type of level, there’s always a look at them to see if they project to be in the NHL as soon as next year. His size would do that, but there’s a lot more that goes into it.

On Byfield’s unique blend of physical attributes
With his size, like I said six-four, six-five, whatever he ends up at, playing over 220 as it is right now. He has elite speed, high-level speed and hands to match that. There aren’t a lot of comps, when you go through the league, trying to find that position that carries those physical attributes and skating attributes. 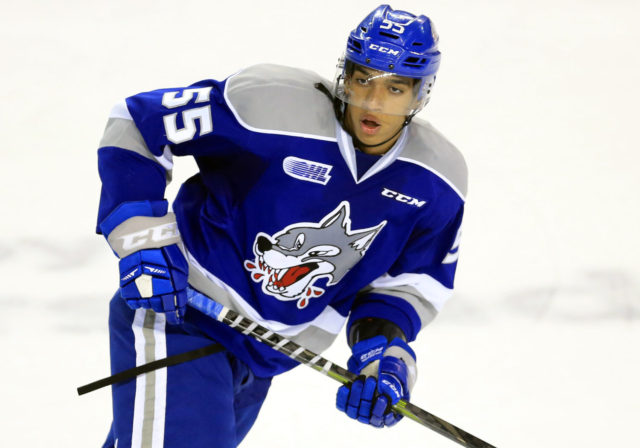