You’re sitting at home, eating dinner and watching TV. It’s the night of the NHL Draft, but you were drafted three years prior and you’re not really paying much attention. And then, the phone rings.

This is Lias Andersson’s story from last week, as he found out the latest news on his NHL career. Anderson was admittedly surprised to hear a member of the Los Angeles Kings on the other end of that phone call, letting him know that he had been traded to LA from the New York Rangers during Round 2 of the 2020 NHL Draft.

“I was actually not watching the draft and I got a call from Los Angeles,” Andersson said, via a conference call with local media. “I thought it was my bank or something, so I just answered and I found out that I got traded, so I was super excited. It feels a little bit like my own draft day, so I’m super pumped.”

The Kings acquired the Swedish-born forward in exchange for the 60th overall pick in the draft, what would have been the third of three second-round selections in LA’s arsenal. 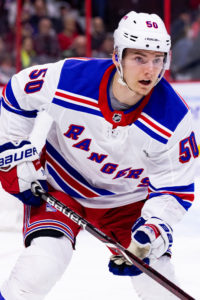 At that point in the draft, with two players (defenseman Helge Grans and Brock Faber) already selected, the Kings felt like they could create a good value through this trade, in acquiring a player selected in the Top-10 just three drafts prior.

“When we got to that certain layer of the draft, we were looking at the ability to get that high-end talent, for what he was drafted originally for, it proved to be something beneficial to us at that time,” Kings General Manager Rob Blake said. “It added some value to what we were doing on the overall day.”

Blake and the Kings hockey operations team aren’t exactly unfamiliar with the 21-year-old either.

His father, Niklas, has been a scout with the organization since 2013. Blake also noted that Kings Head European scout Christian Ruuttu has followed Lias’ progress in his time in the SHL during the last two seasons.

When Andersson was eligible to be selected in the NHL Draft, he was evaluated at the time by the Kings, which left impressions fairly fresh in the minds of many, including Mark Yannetti, the Director of Amateur Scouting in Los Angeles. The Kings picked eleventh in the 2017 NHL Draft, four spots after Andersson was selected by New York, and eventually added center Gabriel Vilardi.

Now the organization has both players as a part of an increasingly exciting pipeline of young talent.

Yannetti indicated that the trade was one of the rare examples of pro scouting, amateur scouting and analytics coming to the same conclusion regarding a trade.

When talking about the draft, Yannetti said that when all three branches come to the same conclusion, the success rate tends to be rather high. 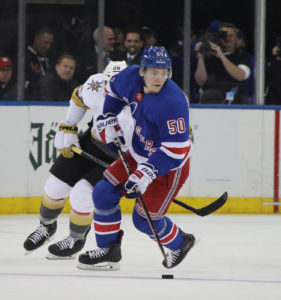 In Andersson, the Kings are getting a player excited for a fresh start and a new opportunity.

“I’ve been looking for a fresh start now for quite a bit, and I feel super excited as I said before,” he said. “It feels like my draft day all over again, and I can’t wait to get started.”

The Kings are also getting a player who has had his ups and downs, but someone who has been perhaps unfairly criticized in certain situations as well.

Just 10 players from the 2017 NHL Draft have played in more NHL games to date than Andersson, which puts him right in line with his drafted position. In the 2017-18 and 2018-19 seasons, when given a more extended run of games with AHL-Hartford, Andersson has produced at a 0.56 points-per-game clip, a pretty successful rate for a teenager playing in a league that is notoriously difficult to score in for younger players.

It’s fair to say that things didn’t work out as planned at the NHL level for Andersson with the Rangers. But it’s unfair not to qualify that statement with noting that Andersson was among the youngest players in the league at that time, aged just 18 and 19, playing in North America for the first time. Andersson played more than 15 minutes in just three of his 66 NHL games, and played less than ten minutes in nearly half of his other opportunities.

While trying, the experiences have made Andersson stronger for going through them.

“One hundred percent,” he said to the aforementioned statement. “I try to see everything positively in life. What happened in New York obviously wasn’t the best for me back then, but I feel confident that I can do stuff different and I can do things better. I’m feeling mentally so much stronger and ready for the next chapter.”

Over the past two seasons, through the sample size is quite small, Andersson has collected eight goals and 16 points from 19 games played in the SHL, the top division in Sweden, including four points from four games played to date this season with HV71 Jonkoping.

For the time being, Andersson continues to progress in the SHL. When he finally makes his way from Sweden to Southern California, whenever that may be, it will be his first trip to the area, something the young forward can’t wait to experience.

“I’ve never been actually, so I’m super excited to go,” Andersson said. “I’ve heard great things about the city, it’s a very famous city and all my friends who have been there talk about it, saying that I have to go. I’ve seen pictures obviously, so I’m really excited to see the lifestyle and the city.”

While neither the Kings nor Andersson have expressed any information regarding his plans for the 2020-21 season, whenever his time in Los Angeles does come, a rejuvenated young player will be on his way to the West Coast.

The Kings are getting a confident and motivated individual and hope that their gamble on value pays off with someone who has grown and is hopefully now better acquitted to succeed at the highest level.

“I believe in myself and I’m very confident that I can do good stuff on the ice,” Andersson said. “When I went back from New York last year to Sweden, I think I showed myself and everyone that I can play my game still. I think I lost my game a little bit in New York, I didn’t do the things that I was good at. Getting back to Sweden, playing my type of hockey helped me a lot to build my confidence up. I have high expectations of myself as always and I’m confident that I can be an NHL player.” 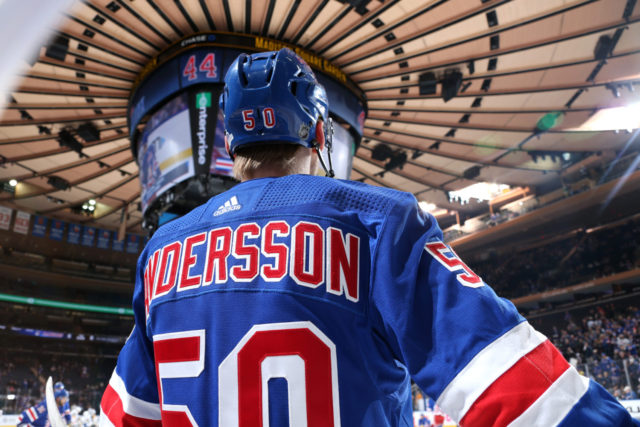