The LA Kings have signed defenseman Mark Alt and goaltender Troy Grosenick to one-year, two-way contracts worth $700K at the NHL level.

Alt joins the Kings from the Colorado Avalanche organization, where he has played since the midway point of the 2017-18 season. The 6-4 defenseman has spent the bulk of the past two seasons as the captain of the AHL’s Colorado Eagles, and also skated in nine NHL games with the Avalanche, and 18 in his professional career with Colorado and Philadelphia.

In his eight-season AHL career, Alt has skated in 376 career games with Adirondack, Lehigh Valley and Colorado, amassing 110 points (28-82-110). This past season, Alt was nominated as the Eagles’ AHL Man of the Year for his contributions in the local community.

In his time with the Eagles, Alt was a big, tough to play against, right-shot defenseman, who showed an ability to fill in at the NHL level when called upon. In very limited ice time, with a very small sample size, Alt has proven to be fine in his role at the NHL level, with career puck possession numbers slightly over the 50% mark.

Grosenick, who signs with the Kings from the Nashville Predators organization, has been one of the American Hockey League’s best goaltenders over the last four seasons, and has spent time with Worcester, San Jose and Milwaukee in his AHL career. In 2016-17, Grosenick was awarded the Baz Bastien Award as the AHL’s top goaltender, the AHL’s version of the NHL’s Vezina Trophy. He was also named to the AHL’s First Team and was selected to participate in the 2017 AHL All-Star Classic.

In his career in the AHL, Grosenick has posted a 132-83-16 record, with a .912 save percentage and a 2.52 goals against average. The Wisconsin native has also appeared in two NHL games with the San Jose Sharks during the 2014-15 season, including his NHL debut on November 14 with a 45-save shutout against the Carolina Hurricanes.

Grosenick adds a veteran in net to Kings organization, filling the hole created last season when Jack Campbell was traded to Toronto and Cal Petersen was recalled by Los Angeles. Groesnick has thrived in that role throughout his career, providing a strong presence in the AHL and an ability to play at the NHL level when called upon. With Petersen and Jonathan Quick already in the organization, adding Grosenick provides a nice bridge between the veterans and young goaltenders Matthew Villalta and Jacob Ingham, creating depth both for the Kings and the Reign. 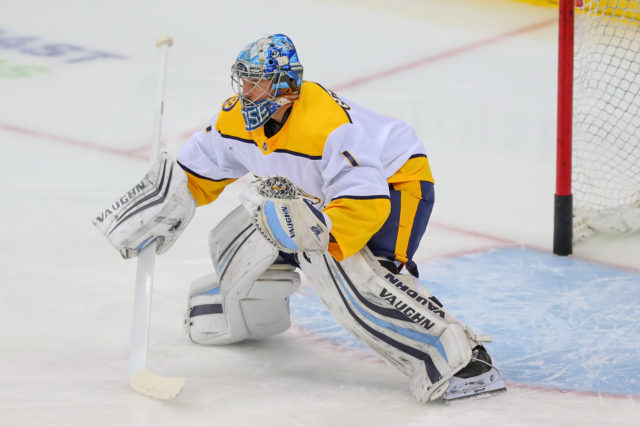