Jim Fox answers questions from fans here at LA Kings Insider. This is the second in a three-part series. A link to the first piece is at the bottom of this story. Enjoy.

Q: Did you hate the Calgary flames as much as I did in the late 80’s-early 90’s? Always secretly liked the Oilers b/c of their style (but hated Glenn Anderson), but the Flames made me sick.
A: The Flames were one of the most physical teams around at that time. Big and strong and tough and skilled. They didn’t make many friends but that didn’t stop them from being very successful. If it were not for the Oilers, the Flames would have won at least one more Cup. asy for me to see why you would hate them.

Q: I’ve heard that Montreal had the best nightlife scene of any city in the league. is that true still with Las Vegas on board now?
A: I guess this depends this your definition of “nightlife” and there are probably different definitions depending on which player(s) you ask? Younger players may have a different perspective than players that have been around awhile. Montreal has a very much “European” feel compared to most other NHL cities and many times that appeals to visitors, since it is different and could even be described as exotic. For the most part, Montreal’s nightclub scene has always been something that most everyone enjoys and it has more of a classy feel than most other cities. And of course, there is the “ballet”. Overall, I think that NYC has more to offer, but Montreal is very special. I know there are many other things to do I Vegas than gamble, but, since I am not a gambler, Vegas really isn’t my cup of tea.

Q: Did you ever drop the mitts? With whom?
A: As far as I know, I was only penalized with a fighting major one time in my NHL career. It was vs. the New York Islanders and it was Duane Sutter. As far as I can remember, I had just scored a goal and before I knew it, Duane grabbed me started a scrap. I had also gotten into it with Laurie Boschman at one time when he was with Winnipeg, but I don’t believe we received fighting majors? One thing that I am certain of, at no time did I ever land a punch let alone throw a punch. I was doing my best to just hold on. 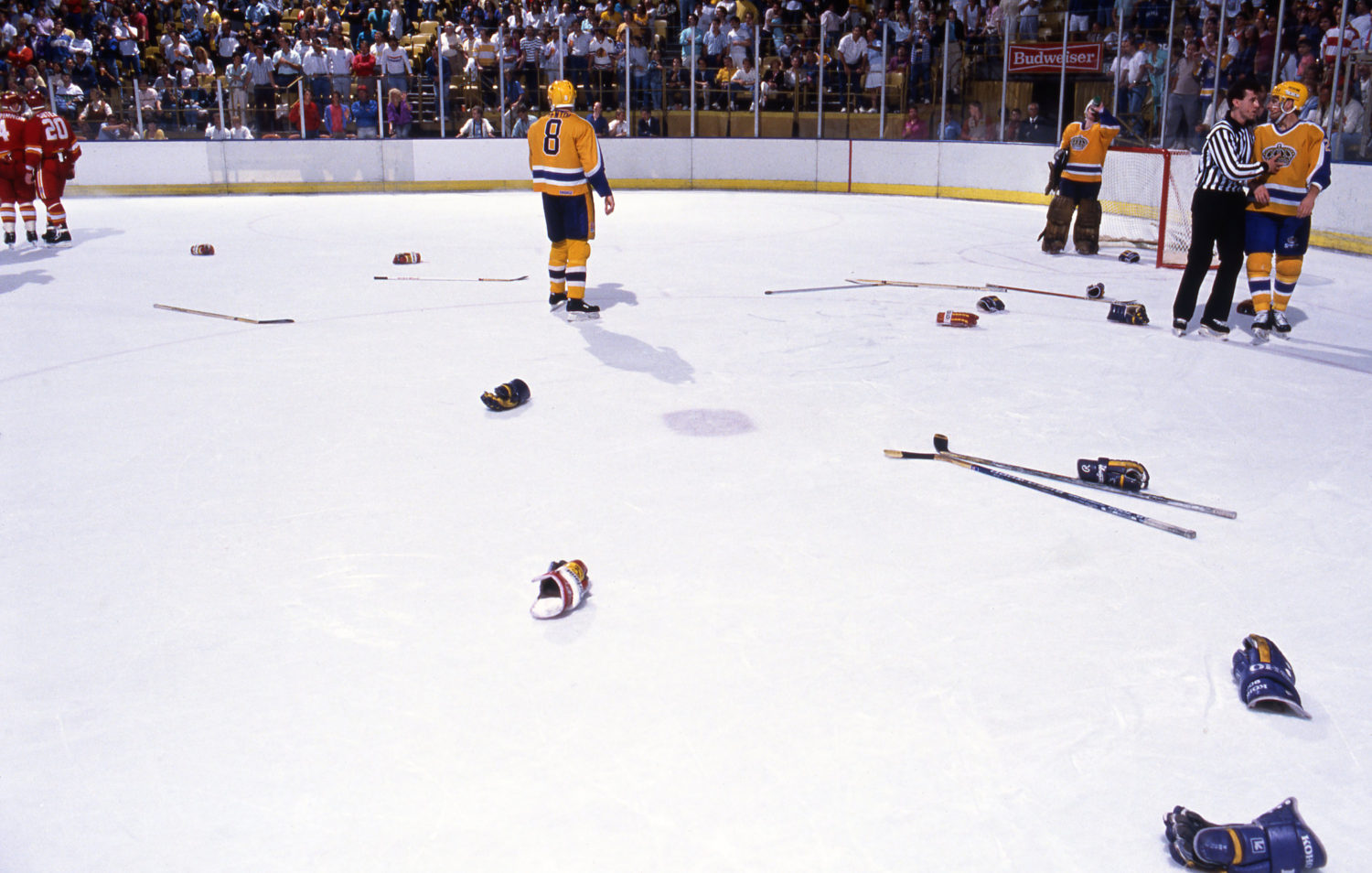 Q: How about teams wear their colored unis at home the 1st half of the year (black for us), and the whites in the second half? or vice versa. Would like to see the white unis at home again.
A: I am a little bit traditional in this area. When I first started to watch the NHL seriously, mid-60’s, the home team worn their colors at home, like it is right now. For that reason, I really don’t mind the way it is now because it brings me back to when I first fell in love with hockey. As you know, every team has 3rd jerseys or commemorative jerseys that they wear and that helps change things up a bit. I have no problem with your plan to alternate jersey color on a regular basis, but I don’t lose any sleep over the way things are done now.

Q: Can the kings PLEASE PLEASE PLEASE wear the purple and gold once this year at home? just once??
A: The Kings, like all other teams look to change things up with colors or honor the past by wearing “throw-back” sweaters. I assume that will continue in the future, whether it be “purple and gold” or any of the other sweaters the Kings have worn? I can tell you this, the league must approve all these types of decisions and many times this approval is done at least two years ahead of the plans to wear the jerseys. The Kings appreciate getting feedback from their supporters, so keep letting them know your opinions. It does make a difference. 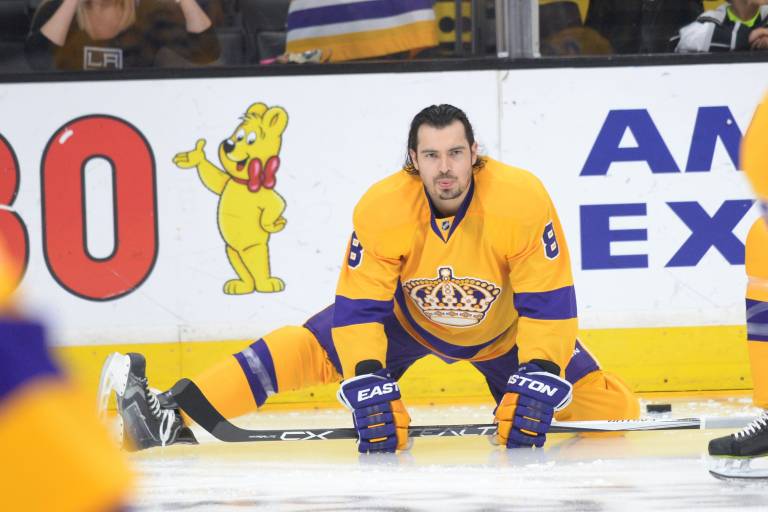 Q: How would you feel about the defending Stanley Cup Champion playing either NCAA Champion of that year. Or a college all-star team at the All-Star game?
A: I just don’t see that happening and the biggest reason is potential injury. In theory, your idea is very intriguing, but if the NHL is going to risk injury, then I assume they will do it in games with only NHL players participating. Incorporating college teams into the All-Star game celebrations may take place, but I would see it as a separate game. I know the NHL is always trying to find new ways and new concepts on how to present the All-Star game experience, but due to the physicality (body contact) involved in hockey, to expect the All-Star game to be “competitive” is unrealistic. I know that you did not mention how “competitive” your concept would be, but generally speaking, I think that anyone who thinks the All-Star game can be even close the real NHL games as far as competitive nature goes, is off base and doesn’t understand the physical, body contact aspect and how that affects “exhibition” games like the All-Star game.

Q: Are you down w/ NHL’ers in the Olympics? I’m not, as that should be something for amateurs to shoot for and attain. Our college guys are great anyway?
A: I have no problem with NHLer’s in the Olympics. I think that the “amateurism” ship has sailed a long time ago. To define amateurism and then enforce any rules associated with the definition would be extremely difficult and I would say, impossible to do fairly. For that reason, I am for the “best-on-best” approach that we have now. Many, many years ago, when athletics were not so much of a revenue generator, maybe, just maybe, it worked. But that is no longer the case and I don’t see it going that way in the future.

Q: What do you think of the 3 v. 3 OT? I don’t like it, as it looks like something you do at the end of practice to work on skills, get used to playing w/new guys, etc. You play 60 M 5 v. 5, then completely change the game just to get a winner. NFL doesn’t go 7 v 7 in OT.
A: There are many factors that come into play here and to compare the NFL to the NHL in this area is apples and oranges. The biggest factor in this specific area that makes the NFL and NHL very different is the way the schedule breaks down. In the NFL, 16 games with basically only one game per week and time to travel between cities. In the NHL, as many as 4 games per week, with back-to-back games and add travel into the mix and you can see why these sports should not be compared to each other when talking about breaking ties and overtime rules. The NHL must worry more about game-to-game fatigue, than the NFL does, when it comes to how to decide tie games. I agree that it is a big move to go from 5 on 5 to 3 on 3, but ways must be implemented to find a winner as quickly as possible, so NHL teams can get on to their next game, without taxing the players too much. But that also means, taking the tie game out of the equation, which is a whole other debate. I’m fine with 3 on 3. I willing to listen to other ways to break ties, but I think that many people overlook how much of a “physically taxing” effect prolonging games with overtime has on players who many times are playing the next in less than 24 hours.

Q: Are there internal, organizational criteria for retiring numbers (must be in HOF, etc.) or is that decided on just stats alone (g, a, pts., etc.)?
A: The decision lies with each individual team. You do mention the HOF factor. I don’t know any team that does not put a huge amount of importance on players inducted into the HOF and how that applies to, whether that player has their number retired. Stats always are a factor and one stat that you did not add to the goals-assists-points would be games played. This allows teams to honor defensive players too. As stated earlier, each individual team does what it feels is appropriate. 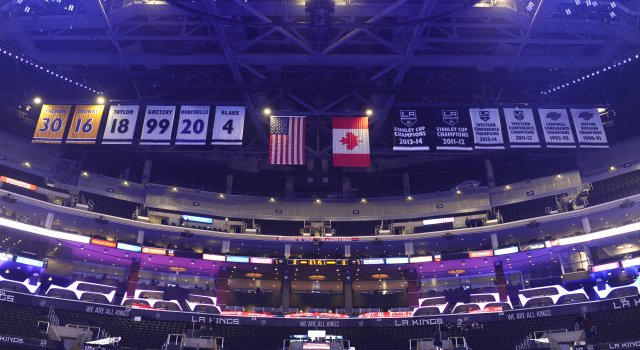