The results are in, and the LA Kings will own the second overall selection in the 2020 NHL Draft!

As determined by tonight’s Draft Lottery, the Kings moved up from fourth to second. The number one overall selection will be made by………someone. The winner of the top selection will come from the pool of eight teams that lose in the play-in round of the 2020 Stanley Cup Playoffs. The exact winner will be selected in a Phase 2 of the Draft Lottery at a later date.

The Kings have selected second overall three times in their history, most recently selecting Norris Trophy winner Drew Doughty in 2008. The Kings also selected Jimmy Carson second overall in 1986 and Doug Smith in the slot in 1981.

The Kings had less than a ten percent chance of earning the second overall selection through the lottery, and were less than 1-in-3 to select in the Top 3. But none of that math matters anymore, as the Kings will have their opportunity to select an impact player some time later this year.

The Draft Order As Of Now – 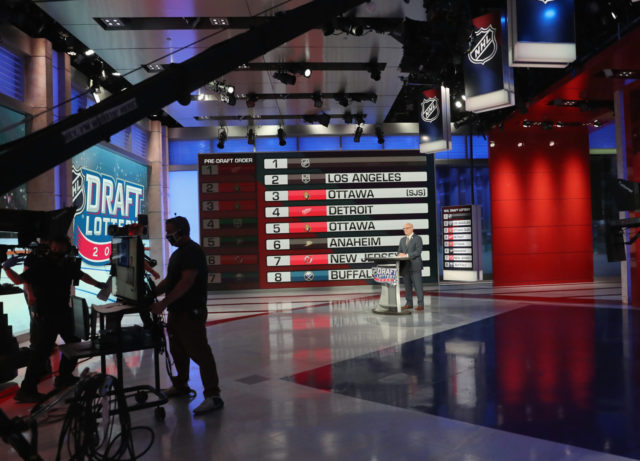 Kings General Manager Rob Blake spoke with local media in a conference call following the results of tonight’s lottery. Blake spoke to the excitement of moving up in the order through the lottery, and also touched on the impact of COVID-19 on scouting and draft preparation, as well as Pick #2 possibly “accelerating” the plan and the thought process behind selecting the best player available, versus by position.

Blake spoke to the Kings having a group of three players at the top of their own internal rankings, followed by a second tier of five players ranked fourth through eighth. With that in mind, moving from fourth to second is a massive jump for the organization.

“Our primary look at this scenario, we knew we were between 1 and 7,” Blake said. “[We had] the Top 3 players and then we had a group from 4 to 8 pretty much that were very similar, in different positions, but ranking wise the way we had it. For us to be able to move up and be able to get in that Top 3 was important.”

Blake noted that this draft class is “forward heavy”, but there are one or two defensemen who would be in contention at the second overall pick as well. He said it is not a must that the player taken is NHL ready as soon as the 2020-21 season, and that the Kings staff, highlighted by Mark Yannetti, will be looking at a number of factors in this selection.

“That’s to be debated, for sure,” Blake said of the position of the player selected with this pick. “There’s a defenseman or two that could be in the mix when you talk about the top players in the draft. It’s heavily forward in the top rankings, by far, so all open for discussion. I take a lot of pride in what Mark [Yannetti] and his staff can do, and the capabilities in their views, their opinions, the analytics and all the information they take in to ultimately coming out with what they say is best for our organization.”

The date of the draft is currently unknown, the team selecting in front of the Kings at first overall is unknown, but we do know one definitive. The Kings hold the second overall selection in the 2020 NHL Draft, and that’s a good sign.

Rob Blake on his thoughts watching through tonight’s Draft Lottery
It’s an interesting night when you come into this, because you know all of the odds and the scenarios. They’re turning the cards over and you’re seeing different teams, but you’re trying to calculate the different percentages that give you an opportunity. At the end of the day, we were sitting fourth coming into this and we finished second, so we’re excited about that opportunity.

On the communication with the hockey operations staff until this point
We were involved in a lot of calls, we went through the interview process. That was all done virtually, that’s usually done at the combine. I think, more the interaction with Mark [Yannetti] and his staff was more [about] the direction. We had a firm direction on where the team was going, we understand the importance of last year’s draft, this year’s draft, but not only high picks but the volume of picks and the direction we’re going. I think a combination of that allowed us to be very involved. Now, we have time until the draft, now we have some more specifics, we’re the second pick in the first [round], and going forward we know where we’ll be slotted. Lots of work to do, but lots of communication going on.

On how the scouting process has been impacted by outside circumstances, advantages and disadvantages
I think the advantages are based off of video. What you miss, you mentioned the playoffs, some of the players may not have qualified. The U-18 was a bigger tournament, that’s where a collection of these players get to play, peer versus peer, and you get to watch and see the difference from the beginning of the year to the end of the year and see what they’ve done, but every team is in the same position. We were fortunate that I think the trips to Europe from our scouting staff had already taken place by the time of the pause. I think video really comes into play throughout the draft and now it takes another step in that interview process. You have a range of 3-4 players who can be in [the first round] area, so you can really dive in on the early pick.

On taking a juniors player versus a European player and the depth of the draft
Christian Ruuttu heads up our European scouting department, and Mark Yannetti with his overall structure of the staff and the amount of view of the Europeans and North Americans, a lot of that will come into play now. Knowing the backgrounds and the types of players, that’s where the work will come in now because the play is already done.

On if getting this draft pick “accelerates the plan”
Maybe at the level of player, yes, in the fact that when you’re talking picks one and two at the draft, they’re very high-profile players. The situation we were in, we knew we’d be in this type of situation, where we’d be in that lottery, so that factored into the plan. Hopefully this does speed it up because of the caliber and adjustment of that player in the NHL.

On drafting with a best player available approach
We look at that a lot. We did the structure in the early rounds as the best player available. There may be some adjustment, we ultimately put a gameplan together, what we would like to accomplish at the draft, based off of where we’re picking and the number of picks. That could change draft day with the number of picks, moving forward and backwards and different things. All of that will factor into the gameplan, but for the most part, the best player is who you take.

On if it’s a must that the second overall selection be ready to play in the NHL next season
I wouldn’t say it’s a must, and that will be determined through camps and projections going forward, when the draft takes place, there’s a lot of different circumstances that could come into play. I would say that the higher picks, or the higher rated players in the draft, obviously have the capability of doing that, and we’ll have to determine that at the right time. 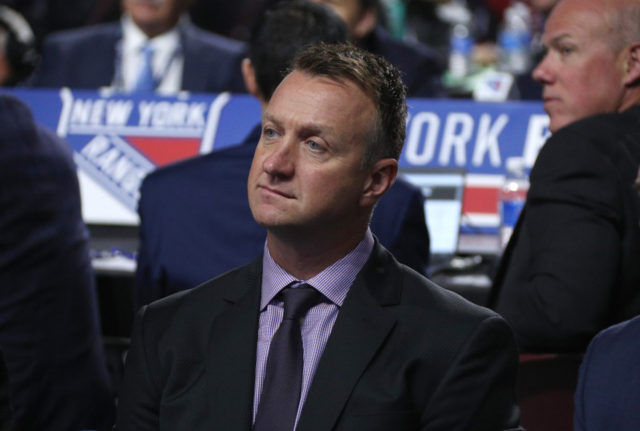