It’s important to see strides of development with younger players.

There’s no one route or path for them to take, there’s no blueprint for how every player should develop, but when a player advances from season-to-season, growth in certain areas is necessary and growth was the name of the game for defenseman Kale Clague.

Clague entered the professional ranks as a 20-year-old rookie in 2018 and experienced his share of struggles. Throughout the course of the season, however, Clague developed from just another guy on the Reign blueline to THE guy on the Reign blueline, which culminated in what would have been an NHL call-up in March, had he not broken his foot on the eve of the impending recall.

“One of my problems coming out of juniors is I was able to get away with things in the d-zone that aren’t going to fly [in the pro game],” Clague said, reflecting back. “From the coaching staff, it’s just lots of video and communication, and they didn’t let me get away with anything, so that helped me. I think that’s going to help in the long run.”

Fast forward to Training Camp 2019, and while he challenged for an NHL job directly out of camp, the Alberta native found himself back with Ontario to begin his second campaign as a professional.

After he put a slow start behind him, Clague started to his hit his stride in November and December, as he collected 12 points (5-7-12) from an 18-game span, including five points from six games played in December. The role that he had carved out in February as a top contributor on the Ontario blueline was not only back, but better than ever.

“I wanted to be the guy on the Reign this year,” Clague said. “Practicing hard every day, playing hard every day and obviously I want to be a guy who can be relied on by the coaches and I wanted to be one of our top players to help the team win every night. I guess that’s a different kind of mindset from year one, when I was learning a lot and just kind of learning about the league as well.” 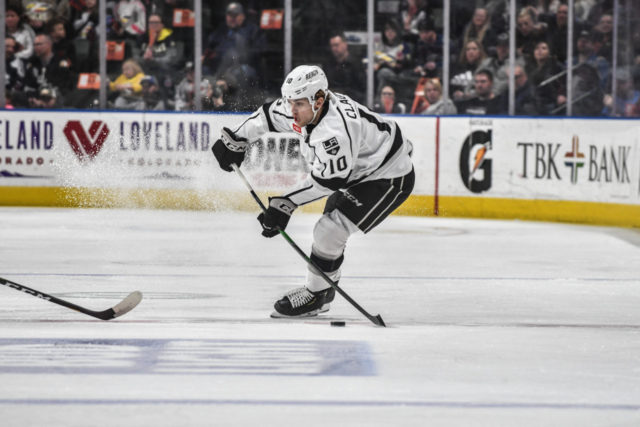 Perhaps the highlight of his early season slate was a three-point night on December 7 against San Jose, in what Reign Head Coach Mike Stothers referred to as one of his best games of the season. Clague collected a goal and two assists, and was imposing his game all over the ice as Ontario overturned a 3-0 deficit in a comeback win.

“He was real good,” Stothers said. “He was skating and he was assertive with the puck. He was showing all the signs that we were expecting of him coming out of juniors. I would agree with you that this was one of his better performances as part of being a defender, and that’s where he’s still lacking. I think it’s been presented to him in a number of different ways, so hopefully he’s applying it.”

Clague’s successes were rewarded on two fronts – his first career NHL callup in mid-December, as he joined the Kings on an East Coast trip following his hot start to the month in the AHL, and his selection to the AHL All-Star Classic.

The recognition on a league-wide level selected him to play in the All-Star event on home ice in Ontario, in a special moment that not only recognized his play on the ice, but also allowed him to share in a one-of-a-kind experience with family, friends and Reign fans in the All-Star setting.

“It was awesome,” Clague said of the experience. “They support us so much all year, the fan support has always been great since I’ve been here, we’re so lucky to have such good fans. Obviously [All-Star] Weekend was really special.” 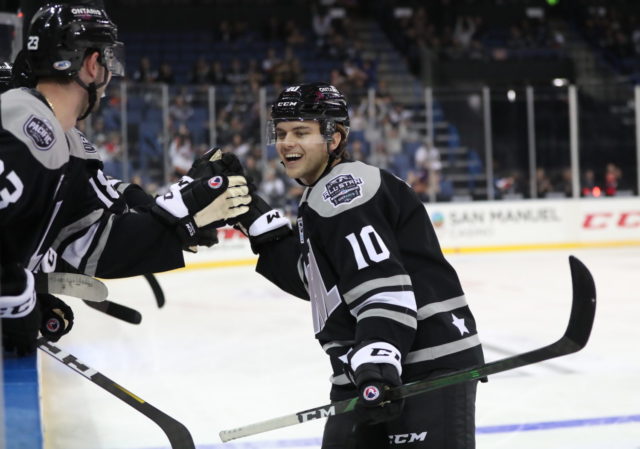 After he was a healthy scratch in his first two games with the big club, Clague made his NHL debut in Buffalo on December 21 and Kings Head Coach Todd McLellan was happy that the 21-year-old went out and played the game that got him there.

“I liked the fact that he had the courage to bring his game to the arena, that’s the type of player that he is,” McLellan said. “He uses his legs, he’s able to jump up and create, he knows his strengths and weaknesses and he was able to check using those, so it takes a lot of courage to play your first game in the league and I thought he brought his skill set.”

Clague got into four games in total with the Kings over the span of a few weeks, before he was assigned back to Ontario to re-assume his role as a minutes eater in the AHL.

While he did not return to the Kings during he shortened 2019-20 season, his brief time in the NHL left a mark on Kings star blueliner Drew Doughty, who touted Clague’s skating ability as a standout quality.

“He can skate like the wind, the way he can move those feet, that’s kind of the way defensemen are going in the league these days,” Doughty said of Clague. “They’re looking for guys that can move their feet, go end-to-end and stuff like that…Kale’s very good at that, you saw that watching him play.”

Doughty touched on Clague’s game still needing work in the defensive end…“obviously we’ve got to work on a little bit of defense with him”, but was complimentary of his young teammate as a whole.

Working on the defensive end is nothing new for Clague, whether it be from Doughty, Stothers, McLellan, or you name it, really.

He’s known since Day 1 that it’s an area of focus for him to progress into a regular in the NHL. The former Braden Wheat King talked about how much he was able to get away with defensively in the WHL, because of his superior skating and puck-moving abilities, that gets punished in the pro game.

“Mistakes in your own end are going to cost you, so I’m just working on the consistency side of being strong defensively, and I think that’s what’s going to get me to the NHL,” Clague said. “I think my offense, my skating, puck moving is going to get me there, but being solid defensively will keep me there.”

10’s his number, so Kale me maybe! pic.twitter.com/sjvvC0ZMVl

With the 2019-20 season now cut short at both the NHL and AHL levels for the Kings, Clague’s attention turns towards a huge summer, before what will be his third professional season.

LA Kings management has spoken about getting a “little sample” of Clague, as General Manager Rob Blake put it, and knows the potential that he possesses. Kings Director of Player Personnel Glen Murray talked about the “taste” of the NHL that Clague got this past season and emphasized the importance of the upcoming offseason.

“Clague got two or three games this year, and he actually played pretty well,” Murray said. “He got a little taste, and I think he understands how hard it is and in his second year, he’s really progressing well. This is going to be a big offseason for him, an extended offseason, as we talked about.”

For his part, Clague knows how crucial of a summer, moving into next season, he has in front of him. He’s already committed to improving his strength and feels that would go a long way towards proving he deserves one of the open spots on next season’s Kings blueline.

“I think if I can take a step with my strength it’s going to go a long way, so I’m working out really hard and have a little bit more time to prepare for next year,” he said. “Right now, it’s using that extra time to really prep and get stronger. I think this is a really huge summer for me, going into my third year. I want to take that next step and become a full time NHL player, and I think getting stronger will have a lot to do with that.” 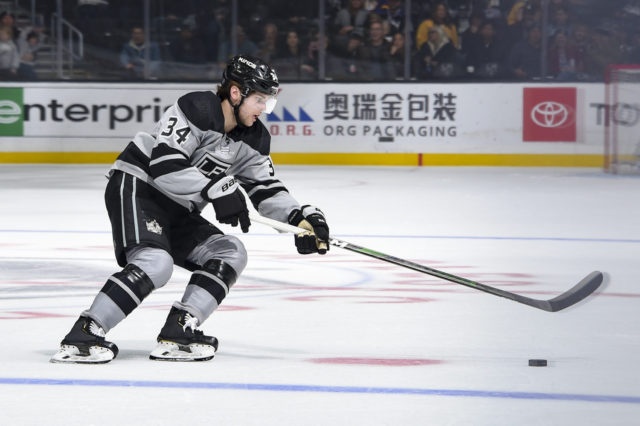 LOS ANGELES, CA – JANUARY 4: Kale Clague #34 of the Los Angeles Kings skates on the ice during the third period against the Nashville Predators at STAPLES Center on January 4, 2019 in Los Angeles, California. (Photo by Adam Pantozzi/NHLI via Getty Images)