Between team-leading numbers and rave reviews, it was a pretty successful rookie campaign for forward Jaret Anderson-Dolan.

The 20-year-old led all Reign skaters with 20 assists, led a large group of first-year skaters in Ontario with 28 points and earned a January recall to the NHL, where he played a small sample of games with the Kings for the second consecutive season. Not too shabby for a player navigating the waters of his first campaign as a professional.

Anderson-Dolan got off to a hot start, with seven points from his first eight games played, before he leveled off a bit with a scoring drought during the month of November. There were perhaps some outside expectations of offensive dominance out of the gate, but Reign Head Coach Mike Stothers was cautious to place those expectations himself on a young player.

“Other people’s expectations probably were that he was going to be way up in the scoring and in the league leaders in points, which I never thought that, and he was what I expected,” Stothers said. “He’s a guy who came in and it wasn’t easy, he struggled, but because he’s worked hard and because he’s put the time in, he’s a pretty versatile guy, we use him in all situations.”

After back-to-back seasons at over a point-per-game in the WHL with Spokane, his offensive numbers in the AHL weren’t quite at the same level, but that doesn’t speak to the impact he made throughout the course of the season.

While Anderson-Dolan found the transition to the professional game to be a struggle at times, he was a constant contributor in a variety of ways for the Reign this season, speaking to the versatility that Stothers described. The first-year forward was a regular on both special teams units for the Reign, as well as a staple in the Top-6. The Calgary native talked about consistency as the biggest difference between juniors and the professional game.

“It’s just being consistent,” he said. “You can’t take any nights off. Just getting your game to form your identity for what you’re going to be for the rest of your career – that’s kind of the big thing, especially when you’re young. Kind of just molding that, and I think when you first come in you want to make an impression as a pro, so that’s kind of the big thing for me.”

The first-year forward began to find his stride after Thanksgiving, carrying through December and into the new year as a more offensively driven player, resulting in a recall to the Kings in January.

Anderson-Dolan got into five games with the Kings before he was assigned back to the Reign, which became perhaps his most telling moment of the season. In his first game back with Ontario, the centerman collected a goal and an assist in a 3-0 win over Bakersfield. There was no sulking and no pouting, simply a return to business in the AHL as the Reign began their second-half ascent towards a playoff berth.

“He [didn’t] miss a beat, he [came] back with a terrific attitude, but that’s not surprising to anybody that knows him,” Stothers said, of Anderson-Dolan after he was assigned back to Ontario. “JAD just wants to play hockey and if he’s going to play, he’s going to go balls out every time. He doesn’t hold back, he’s intense, he’s focused. Whether it’s a Kings jersey that he pulls on or a Reign jersey that he pulls on, he wants to be better than the guy he’s matched up against on the ice.”

In terms of his development, the Kings took notice after his return to Ontario as well.

“You always see the players that you hope they don’t pout or be upset – You hope they’re upset and angry but not in a bad way, and this kid was awesome,” Kings Director of Player Development Glen Murray said. “He got in the gym right away when he came back down, he worked on his game, he understood where he was.”

Anderson-Dolan continued to be productive down the stretch. The rookie forward capped off an impressive comeback win in San Diego with the overtime game-winning goal on Hockey Day So-Cal in February, and collected another multi-point effort in the Reign’s convincing 8-4 win over Tucson in February, snapping a seven-game losing skid against the Roadrunners.

Talk about peaking at the right time.

When reflecting back on his rookie campaign, Anderson-Dolan talked about the challenges he faced adjusting to being a center at the professional level, and the necessary improvements he made to his defensive game throughout the course of the season.

“As you move up levels, it gets more challenging and [you’re facing] better players, so just the little parts of the defensive side,” Anderson-Dolan said. “Getting good angles and me being a centerman was definitely an eye-opener on how hard faceoffs are in pro hockey, I definitely need to get better at that. It’s definitely something I’m going to focus on this summer, but I improved in that area compared to the beginning of the season.”

Defensive adjustments are certainly nothing new for young players.

Frequently, players aren’t asked of as much defensively in junior or collegiate hockey, due to their high-end offensive gifts. Anderson-Dolan’s hockey-IQ has always been praised, but it was still an adjustment moving to the AHL, going from playing against teenagers to grown men on a nightly basis. He pointed to not just his work with the Reign staff, but also with Jarret Stoll of the Kings development team as someone who played a similar game as a player, and was helpful as he improved his own game.

“I think that’s a part of learning and living life in the American Hockey League, what it’s like to be a pro,” Stothers said. [He] made some real good progress, and we’re real happy about that.”

On the ice, he’s determined to improve the offensive side of his game, and noted that’s he watching a lot of video to improve at that end of the ice.

“I think the offensive side of it, my release needs to get a lot quicker, I didn’t have the season I wanted to offensively and I think a lot of that is quick release and hitting my spots,” Anderson-Dolan said. “I missed the net way more than I should, so just working on that, shooting a lot of pucks this summer and also just working on getting into those areas. Watching some clips, watching some goal scorers and where they are to get opportunities, I think that will help me for next season, it’s definitely something I’m focusing on.”

Whether Stothers will have another opportunity to coach him is, at this point, unclear, but what is defined is Anderson-Dolan’s will to succeed, which transcends leagues. The man they call JAD appears to be primed to make the jump to the Kings on a full-time basis, but his work ethic and attitude won’t change based on the logo on the front of the jersey.

“He wants to succeed,” Stothers said. “A lot of players can say that I’d really like to be in the NHL or whatever, but this kid, he’s not going to be denied. It’s a wonderful trait that he has.” 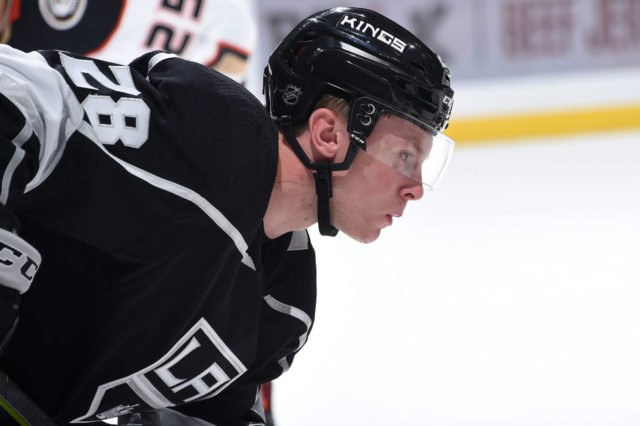 LOS ANGELES, CA – SEPTEMBER 23: Jaret Anderson-Dolan #28 of the Los Angeles Kings looks on during the second period of the preseason game against the Anaheim Ducks at STAPLES Center on September 23, 2019 in Los Angeles, California. (Photo by Adam Pantozzi/NHLI via Getty Images)