Waking up with the Kings: March 2 - LA Kings Insider

Sunday’s game furthered the improbable but very clear trend in the L.A.-Vegas rivalry: The Kings definitively lost the scoring chance and possession battles but capitalized on their opportunities, benefited from superior special teams and goaltending, and won the game. That doesn’t usually work against most good teams, but it does against the Golden Knights! Los Angeles, with its 39.4 CF%, 39.0 FF%, 39.6 SF% and 39.7 xGF% in this year’s head-to-head match-ups, claimed 10 of the 17 five-on-five goals and three of the four wins off the back of a robust 12.2% shooting percentage and another excellent night by an L.A. goalie. This time it was Cal Petersen, who won for the second time in as many career starts against Vegas but didn’t walk alone despite what the discrepancy in shots and chances indicates. The Kings did an excellent job of getting in shooting lanes and both blocking shots and forcing attempts wide, leading to 45 of an impressive 88 shot attempts either catching equipment, a post or the end boards. Petersen was no doubt terrific, but the special teams had a hand in expanding and protecting the lead. With a 2-for-2 power play performance and a 3-for-4 night on the penalty kill, the Kings improved to 4-for-5 on the PP and 7-for-8 on the PK in building a three-game head-to-head winning streak; in their loss, on October 13, they were 0-for-3 on both the power play and penalty kill. Los Angeles hasn’t exactly been on top of its competitive cycle since Vegas arrived on the scene, but they’re now 8-4-1 in the regular season against their I-15 rivals. It’s a bit similar to L.A.’s proficiency against Colorado upon the Avs’ relocation, a two-Cup span in which the Kings didn’t always match up well talent-wise but went 15-12-2 against Forsberg, Sakic, Roy and company during their first six years in Denver. 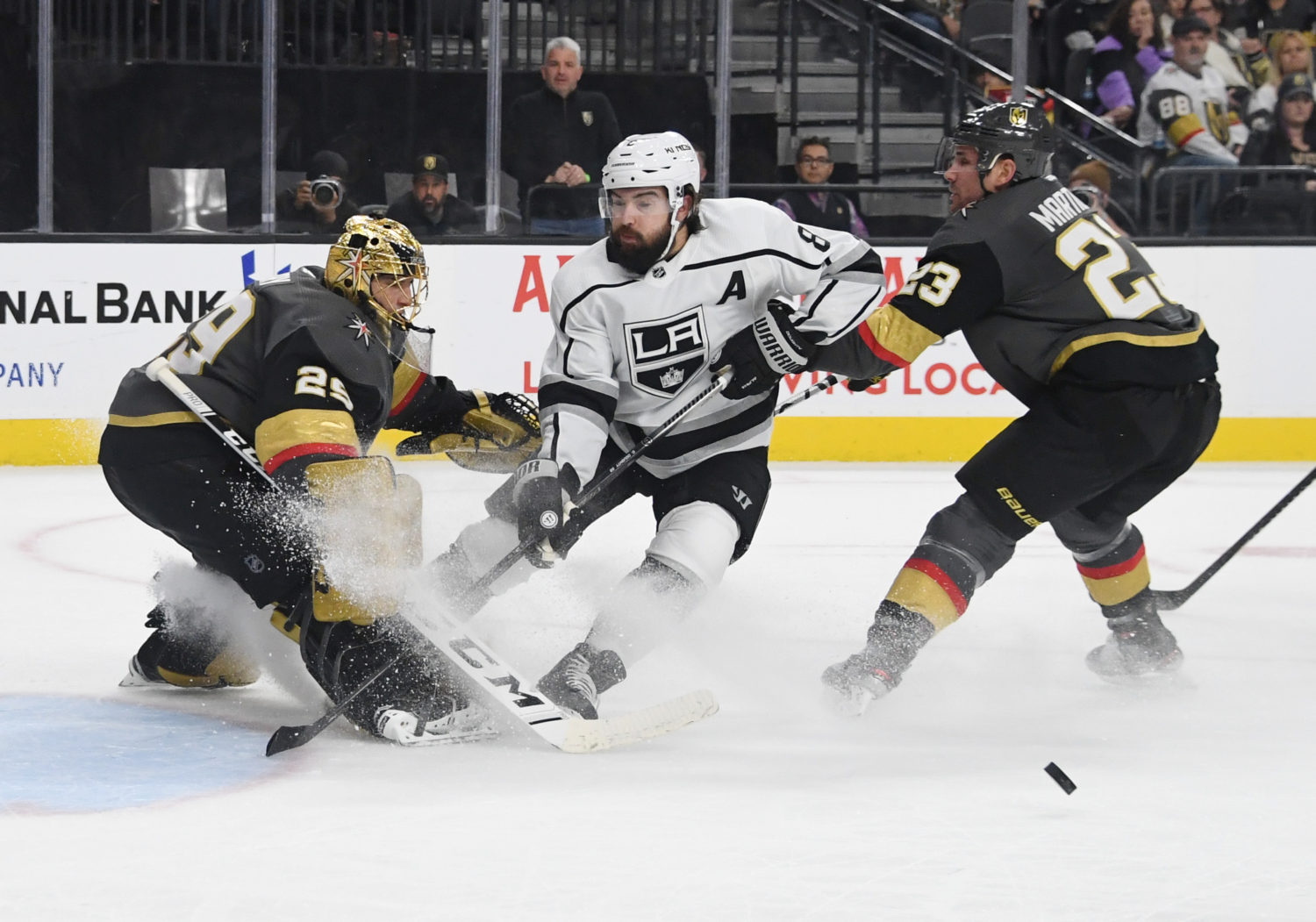 In a very good road first period, some needed Austin Wagner detail paid quick dividends. He jumped into a play quickly and immediately applied pressure that impeded on Vegas’ ability to set up a five-man unit. After the puck was worked high, he beat William Carrier to the net with an efficient straight-line burst of speed that drew a cross-checking minor. The Kings scored on the subsequent power play as Drew Doughty waited for traffic to converge in the crease and unleashed a low shot that Marc-Andre Fleury kicked out behind Kopitar. Showing remarkably smooth hands, Kopitar plucked the puck from behind him and in one fell swoop transferred it to his backhand and lifted a sharp-angle, top-shelf, short-side shot past Fleury. In addition to an excellent performance by the top line, this was also maybe Drew Doughty’s signature performance of the season, a game in which he registered two assists, a plus-two rating and two shots on goal in 23:49 of action. Going beyond the numbers, his hook on Paul Stastny’s hands was needed and probably saved a goal, and by standing Ryan Reaves up at the blue line, he illustrated the best uses of his skating and physicality within the 1-3-1, an evolution that hasn’t always been linear for him personally. 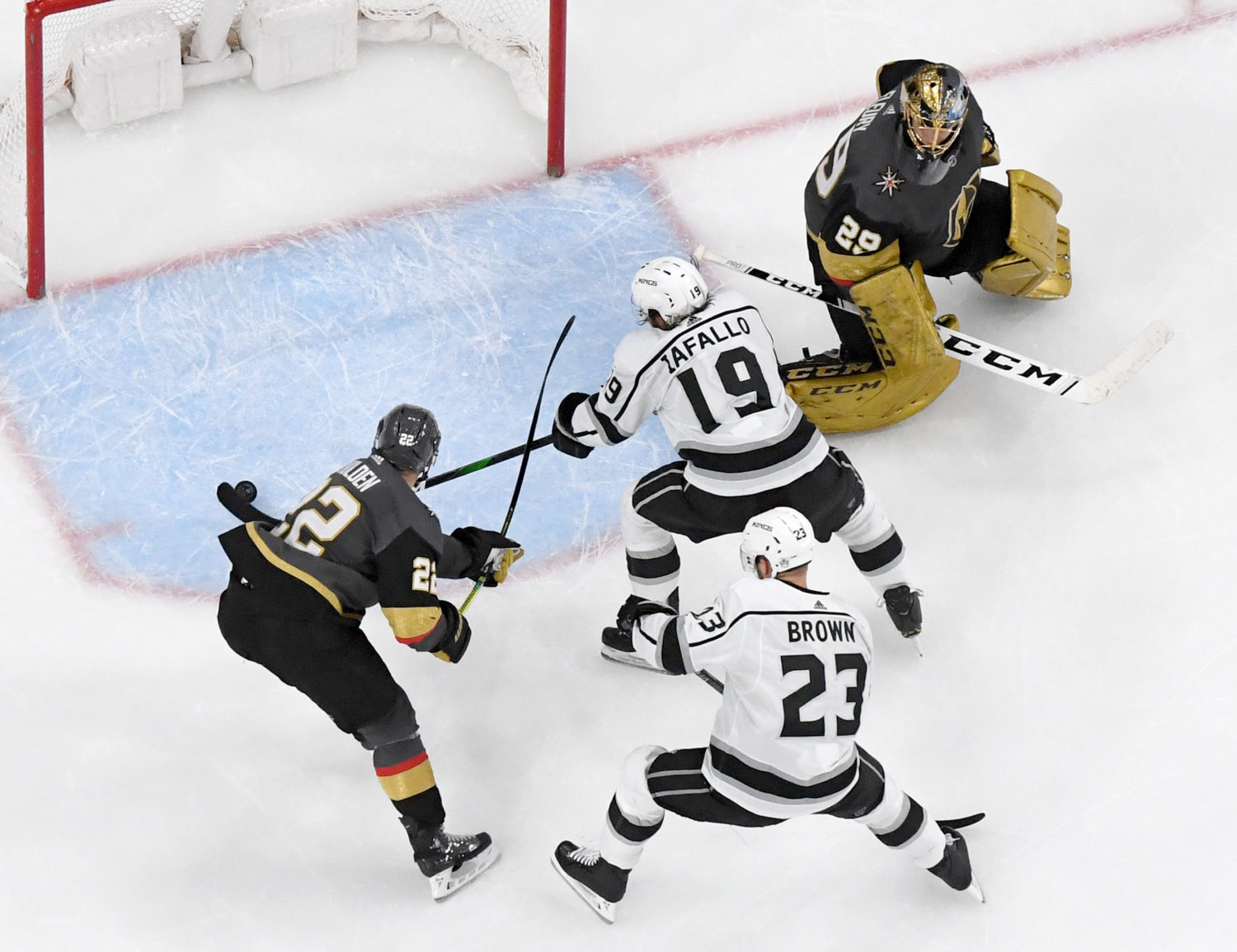 From there, the Golden Knights took over. They took over just as they had in previous Kings wins in their building after falling behind by multiple goals. This isn’t a huge surprise; Vegas is an elite possession team that checks well and works relentlessly to win pucks back after losing them. But Los Angeles – also a good possession and chance-generating team – was out-shot 37-8 over the final 40 minutes, and that shouldn’t happen. Petersen was excellent, as were the shot blockers and those forcing shooting lanes wide of the net, as described above. But for as wide as the shots and scoring chances gulf was, there were an awful lot of Vegas one-and-dones into the L.A. zone, especially in the first half of the game, and the best opportunities were hopping over sticks, fired into shin pads and weren’t consistently being put on net. But Petersen was very good again, and the Kings goaltending as a whole has taken a major step forward, providing the club with a sturdy spine from which its 6-2-1 run has branched out. It’s an inverse of their season as a whole and perhaps just an ol’ fashioned regression-to-the-mean. Though a 47.1% xGF% over their last nine games doesn’t indicate they’re playing well, their .939 5×5 Sv% has been winning them games. Given their character and work ethic in the face of a stiff challenge this season and the lack of reward even when playing well, this market correction is natural and well-deserved. 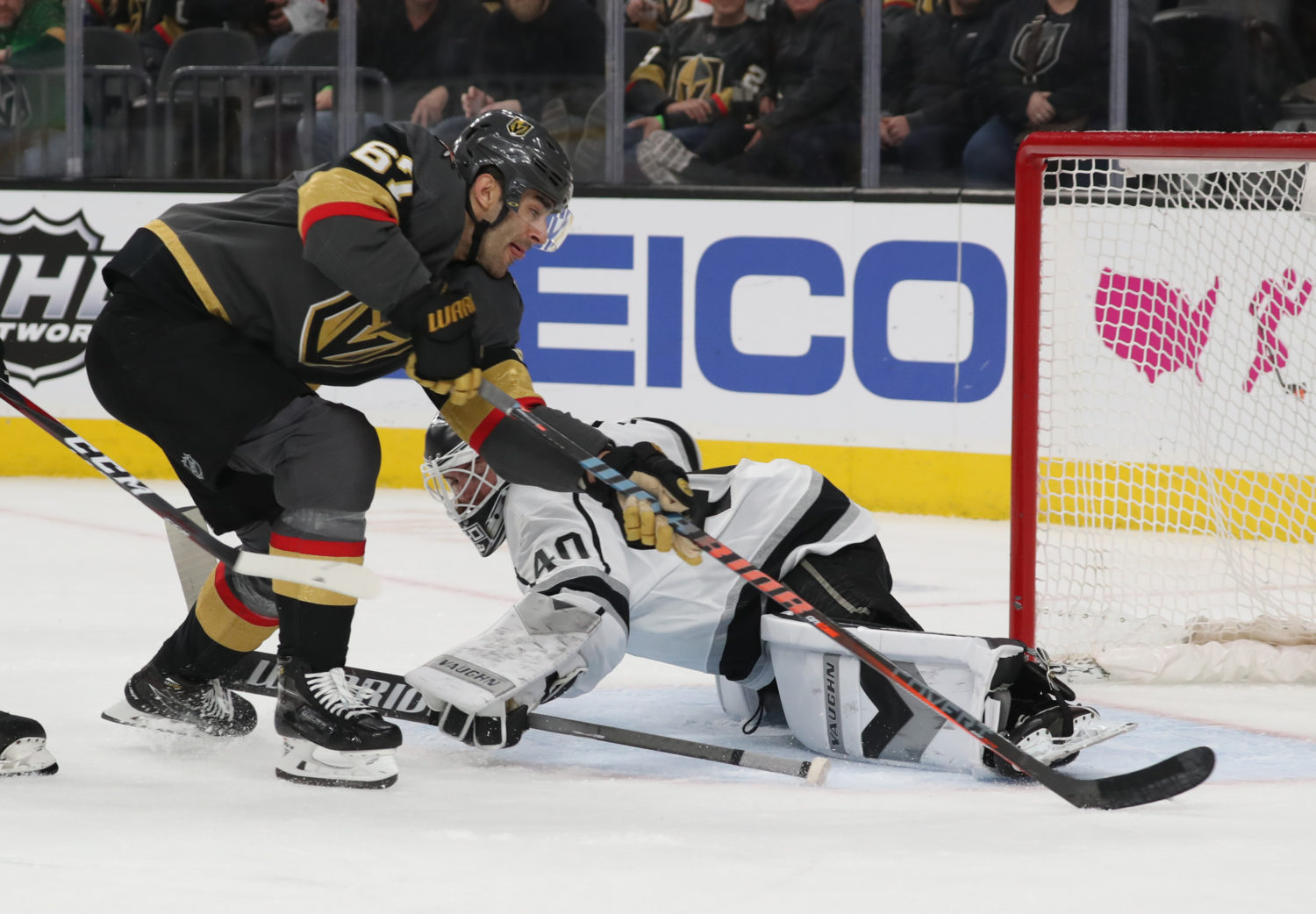