This is going to get a bit complicated. "Not to sound blunt, but it's in the past." - LA Kings Insider

This is going to get a bit complicated. “Not to sound blunt, but it’s in the past.”

Whether measured by statistics, team success or the swiftness in which he called into question Shea Theodore’s answers in Family Feud – “Better than [Zach] Whitecloud, though” – Alec Martinez appears to have (predictably) fit in seamlessly with his new teammates. Winning, of course, eases all transitions, and Martinez has won all five games he’s played under the crest of the Golden Knights, who in their third year of existence will attempt to do what only one LA Kings team in 53 years has done: win a ninth consecutive hockey game.

Martinez, loosely speaking, has had an opportunity to win nine games four different times but has come up empty each time. (The number of times he’s had the opportunity to do so speaks to the heights of his remarkable career parabola with the club.) With Matt Greene fully recovered from a lower-body injury, Martinez was assigned to AHL-Manchester on January 20, 2010 – the very day before L.A. notched the first of their nine straight wins with a 4-3 shootout win over Buffalo.

He jumped out to a 2-0 lead with the Kings in Jonathan Bernier’s first game back at Staples Center in March, 2014, but Bernier suffered a lower-body injury and exited the game, and the Maple Leafs completed the comeback to end their streak at eight. The following season, he was injured in an emotional game in Tampa Bay – there have been stories written before and after that game – the last of his minutes in the first of the team’s eventual eight straight wins. Two seasons ago, as the Kings raced out to a hot start under John Stevens, he appeared in all eight wins bridging November and December, 2017. 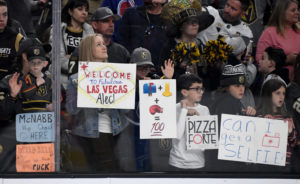 Martinez is again on a Very Good Team and is building towards an opportunity to add to a resume only a very few in the NHL can match. And that’s when it gets just a little bit less rosy. “I know it’s going to be weird,” he said of facing his former team so soon after his first career trade.

“I mean, it’ll probably be a little different, but at the end of the day, there are two points on the line. I guess, not to sound blunt, but it’s in the past. I want to keep winning. We’re trying to make a push for playoffs, and every two points matter, and especially right now as tight as it is. To me, I guess, it’s another game.” He’ll enter Game 67 on the schedule with two goals, six points and a plus-five rating in five games as a Golden Knight.

Brayden McNabb is still close with several ex-teammates, but any questions about cutting the cord seemed to have been answered well before his violent elbow on Anze Kopitar during the Golden Knights’ 2018 sweep. As he shared on Sunday, it’s not quite as black-and-white – that emotional residue still does exist. “I don’t know if you’ll ever ‘cut the cord,’” he said. “Hockey-wise, you will, but it’s personal relationships forever, so it’ll always be fun for him. It’s always fun for me when I play L.A., so it’ll be fun for him for the rest of his career.”

🎥 McNabb on Martinez: I told him not to wear out all of his energy in warmups. I'm excited for him, it'll be a fun game. pic.twitter.com/WxvKMvznNr

In a divisional rivalry, and with Martinez’s gravitation towards his team’s high-tension (and often blunt-force) moments, things could become much more complicated between an organization and the player who provided maybe its most iconic moment. He’s another type of player who goes to great lengths to give his team the best opportunity to win, whether it means stepping in front of slapshots, or, as was the case while he was being scouted, stepping up and fighting Casey Cizikas after his episode with Drew Doughty.

But also very much “stepping in front of slapshots.” As it was referenced with Golden Knights Head Coach Peter DeBoer, Martinez is second in the NHL in blocks since joining his new club. “I think that when we acquired him, that was one of the things that Crim (General Manager Kelly McCrimmon) and George (President of Hockey Operations George McPhee) really liked about him and the pro scouting reports we had on him,” DeBoer said.

“A lot of times you get a veteran guy, some guys will do it earlier in their career or when they’re desperate and when they get a little bit older, they don’t want to do it anymore. This is part of his DNA. He puts his equipment on, the puck drops and he’s going to sacrifice and there’s no second thought to throwing himself in front of those situations. That type of attitude, I think, is contagious. If you see with two Stanley Cups and a veteran guy out there doing that, you hope that bleeds through the group.”

I had a bunch of interesting conversations at the Golden Knights’ Summerlin practice facility today and in recent chats with members of the Kings. There’s no way to get a real feel for a team or an energy by spending only 20 minutes of open-media time in a dressing room on a game day, but nothing, at least at 11:00 a.m., seemed irregular or out of place for Martinez on a game day. He’s a fully integrated Golden Knight who preferred to talk about Theodore, his current defensive partner, when asked to weigh in on Matt Roy’s growth. That’s when we were let in on his Family Feud scouting.

He was having fun; Martinez was happy to say good things to say about Roy – err, Partner – who’s put together a fine second season influenced by the traits Martinez had absorbed from Greene and Willie Mitchell and passed on.

“Obviously, Roysie and I had – we still do – a really good friendship. Just the fact that we’re both Michigan guys, we have that commonality,” Martinez said. “He’s an incredible player, he’s really talented. I said it from the get-go that he was going to play for a long time. He’s really steady, he’s a smart player, he does a lot of things well. I guess I tried to help out him and Walks and Dermie as much as I could, but at the end of the day, it wasn’t me, it was Roysie that made the plays and has played the way he has, so he’s a good player, a hell of a guy and I’m happy to see him do well.”

RELATED: Waking up with the Kings: February 21

🎥 Martinez on facing his former team: To be honest, this is uncharted territory for me. I've never really gone through this before. pic.twitter.com/UPUgI1aIzq

Alec Martinez, on acclimating himself to a new team:
I think actually, going through this year, changing the system, even just World Championships, going the past couple years, playing a different system has kind of helped me. Experience lies in terms of learning how they want certain particular situations played here. But they had a really good thing going here before I was even here. So, I just pick my spots and obviously stay probably relatively quiet at the beginning, and if there’s anything I can say to individual guys. I mean, they’ve been helping me out a ton too, just in terms of, well everything from off-ice to on-ice. They had a really good thing going, so I’m just trying to step I wherever I can to help ‘em win.

Todd McLellan, on Alec Martinez serving as a conduit between the coaches and the team:
Marty was outstanding. The veteran presence, the fact that he’s been through the evolution of a team – he was a young player in the league and had some of the veterans that flanked him, and now he’s giving that back to his teammates. When we lost him to injury, it hurt our team. Following his recovery, I think he played some of his best hockey during the year. So, he meant a lot to the team. We’re really grateful that we had him. We dearly miss him, but we also wish him well. We’re obviously going to play [Sunday] night to do our best to beat that team, but as it goes forward, we’d like some of our former Kings to do well, play well, and Marty’s one of ‘em.

Matt Roy, on Martinez:
Marty, he was great for me. We’re both Michigan guys, so we kind of started off with that little bond there. We found out that we kind of have the same humor and a bunch of little things kind of added up, and he kind of took me under his wing, I guess, and we became great friends, so it’s tough seeing him, leave, but I’m glad he’s having so much success over there right now in Vegas.

Roy, on whether he’s still “Partner”:
That faded away. I’m sure it’ll come back at some point.

Peter DeBoer, on how Martinez has handled joining a team’s veteran leadership group:
I think when you have good character people, they have a really good feel for how much to push and how much to jump in, and I think his resume speaks for itself. He’s got tremendous respect in the room. Multiple Stanley Cups. But he’s also a good guy, he’s easy to be around, he’s easy to talk to, and every day he’s around here he gets more comfortable taking on some of that leadership stuff.

DeBoer, on whether Martinez’s biggest contributions have been defensively:
No, that’s been a small piece. He’s moved pucks for us, he’s defended well, he’s added a really nice offensive element to our game that I knew he had. It wasn’t that long ago – three, four years ago – that he had put up 30, 40 points in this league and played on the power play, so that was always there, and it’s nice that we’re seeing some of that again.

Brayden McNabb, on what he’d shared with Martinez upon learning they’d be teammates again:
There was obviously a bunch of rumors kind of going around, and usually when that happens, for the most part it’s true. Yeah, we were texting back and forth, and he was asking questions about living stuff, and I just wanted to help him out as much as I could, and when it finally got announced, I was pretty excited. I know he has mixed emotions, for sure, but he was excited to come here at the end of the day. He’s been awesome for us, so we’re happy to have him.

McNabb, on Martinez’s quick integration:
Honestly, I don’t know if it took a day. It took 10 minutes, maybe. He’s a great team guy and he’s very easy to get along with with everyone. So, yeah, I was thinking that to myself, actually. It feels like he’s been here all year already. I think it’s been a smooth transition for him. 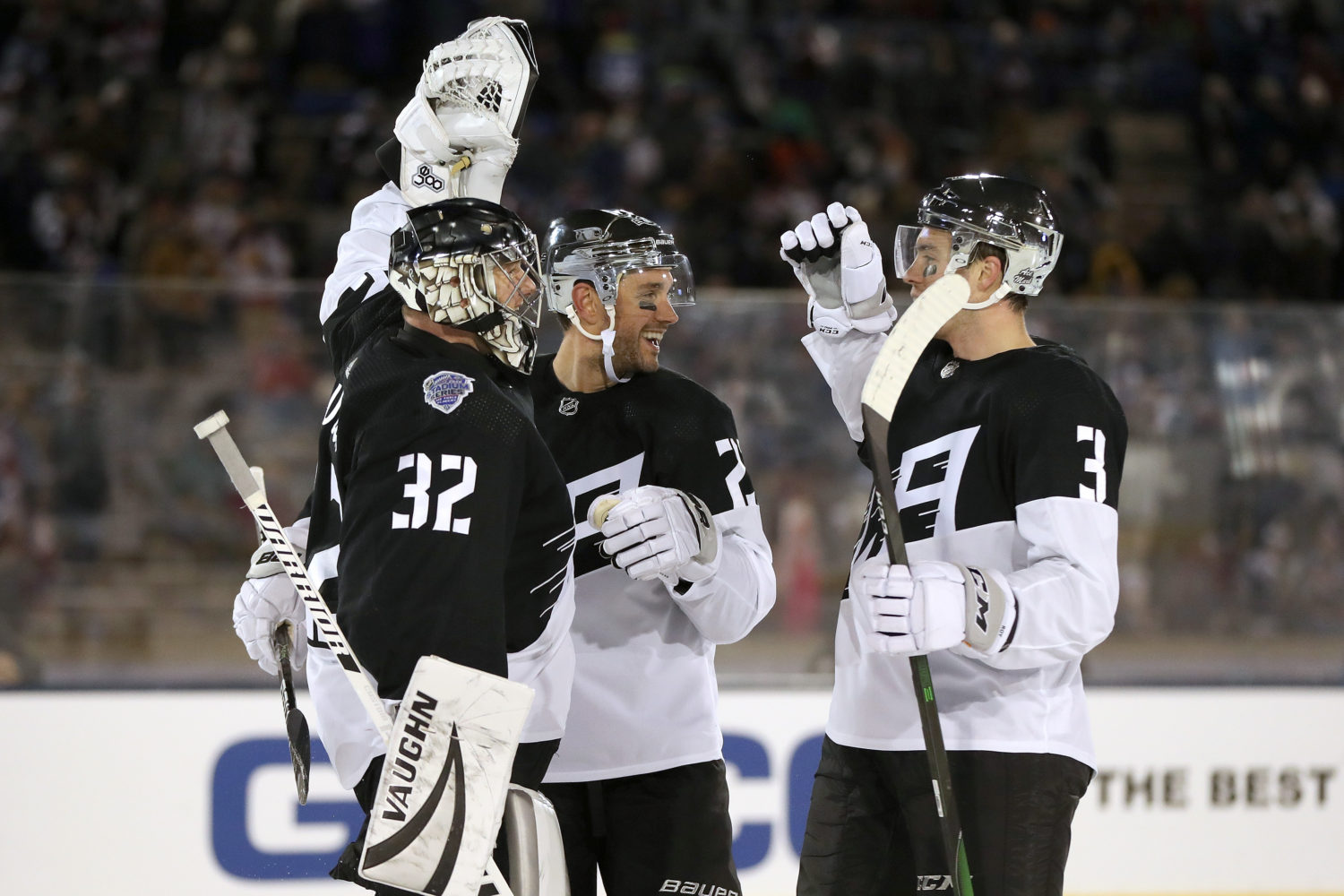