— Another bit: Los Angeles retains 25% of Forbort’s salary, so they’ll retain two of the allotted three salaries through the end of the season. (50% of Kyle Clifford’s salary was also retained.) And the conditions are virtually the same as last year’s Oscar Fantenberg trade, but with a re-signing wrinkle added.

Conditions for Forbort. 4th round in 2021. If the Flames make it to the conference final and he plays in half the games or if they resign him it becomes a 3rd rounder in 2022. LA retains 25 percent of his Salary.

— Most incoming calls prior to the deadline were for players on expiring contracts. That includes the likes of Ben Hutton, Trevor Lewis and Joakim Ryan in addition to Derek Forbort and, previously, Tyler Toffoli and Clifford. Blake was asked whether he had any calls on Jeff Carter. “Inbound? No,” he said. “Like I said, there was lots of discussion, but most of it surrounding our unrestricted free agents.”

This didn’t come from Blake, but there were also some calls coming in gauging what the Kings were looking to do with Kurtis MacDermid, a restricted free agent. Barring some unforeseen overpayment, I wasn’t expecting anything to materialize there.

Heading into today, the sense I had was that Forbort and Hutton were the most likely to be traded; I placed the over-under on potential trades at 1.5. Though teams had looked at Lewis, interest did not build leading up to the deadline. Washington had expressed interest in him while we’d passed through several weeks ago, but that passed.

Though the Kings are looking to get younger, Blake didn’t shut the door when asked whether he could envision a scenario in which Lewis and/or Hutton signed to return in 2020-21. “I think you can envision any of that, particularly,” he said “I don’t see anything right now that said that would be set in stone that we wouldn’t. That will take place over time.”

— One reason why Los Angeles (at least theoretically) could be interested in Hutton is that he plays a position where Los Angeles doesn’t have depth. It’s early, but count left-defense as among the targets LA will focus on when they approach free agency and the resumption of trades around the NHL Draft. “Obviously, defensemen-wise, on the left side, we’re very young there,” Blake said. “You move Derek out, and you spoke about a couple free agents there on the left side (Ryan, Hutton). So, there are some things we want to address in free agency, but we’ll look at that when it comes.”

— Tim Schaller was assigned to AHL-Ontario today after clearing waivers and will be eligible to play in the Calder Cup Playoffs.

— Martin Frk, on the other hand, is not. He was essentially left off the Reign’s postseason roster when he signed his two-year contract. (Officially, he’s ineligible because he wasn’t paper-transactioned to the Reign earlier today, a roster move that would’ve required clearing waivers and therefore became too risky of a transaction for Los Angeles to make.)

“I read a lot on the 10 game situation and everything,” said Blake, referencing the CBA Article 13.2 (b) in which players require waivers once they’ve accrued 10 games or 30 NHL days of service since previously clearing waivers.

“Even if we went past the deadline and he played in a game, even if we paper-trailed him and played him again, he would still need waivers. He’s got two years left. A team could’ve claimed him but wouldn’t have been able to use him in the playoffs, but we weren’t going to risk that. I think once we did those deals last week, we knew that Martin would be up here for the remainer of the season.”

— There’s still some roster maneuvering ahead, some of which should involve Gabriel Vilardi, who was paper-transactioned today. There’s still some rearranging ahead before we gain clarity on his status for Wednesday (either versus Pittsburgh in L.A. or at AHL-San Jose) and beyond.

“I don’t know if I’m prepared to talk about it right now. As of now he’s assigned down,” Blake said. “We liked what we saw out of him here. It’s a tough three-in-four nights. The excitement of his first game, bringing his family in, matching up against Colorado’s speed, matching up last night with McDavid and Draisaitl, it’s a tough match-up for him. Todd protected him a little bit there last night, but I think we like what we saw out of Gabe. We’re going to be in a similar situation with some other guys this year, too.”

Asked whether Vilardi would remain down in Ontario, Blake responded, “we’ll see how the roster takes place throughout the week.”

— Importantly, these recent moves essentially fulfill the initial phase of the “refresh” or “rebuild or “THE PLAN” or what-have-you. I’m wary of speaking over any team executives, but broadly, Los Angeles’ thrust is to divorce themselves from cumbersome contracts and become younger, more skilled and more offensively inclined. That purpose was based heavily around gaining returns from expiring contracts, as well as from the likes of players like Jake Muzzin and Alec Martinez, who had extra years remaining but were 31 and 32, respectively, making them costly pieces for a team not in a position to content.

“The ‘Phase II’ is that some of these guys have been in the American League for the year and they’re getting their experience,” Blake said. “You saw it with Gabe here recently. I would suspect you’ll see it with a defenseman within the next little while here, so they’ve had their time to groom in the American League. Ideally you wish you had a little bit of time with them, but again, that’s what we’re looking to do here near the end.”

This is likely a nod to Mikey Anderson, a defenseman who could end up on the parent club very soon. Kale Clague and Toby Bjornfot should also get a handful of games, though the team can’t play Bjornfot more than nine games, or else they’d start the clock on his entry-level contract, which has two slide years available. “Mikey Eyssimont’s had a pretty good season. He came into camp and battled hard there,” Blake said when asked for players who’ve caught his eye in Ontario. “The two young D in Mikey Anderson and Toby, obviously. Matty Villalta’s been really good since Cal’s come up here. He’s been handling a lot of workload and he’s been doing a good job with that, too.

It’s fair to say that this team is no longer stripping down parts and will be looking to add and build now.

“A hundred percent. These guys that have been here and have won championships, whether one or multiple championships, they should be remembered and thanked for everything they’ve done for this organization. It’s not an easy few months here because you’re dealing with some very important people in the history of the LA Kings, and they’ve been able to do a tremendous amount, but we’re moving forward in that.”

It’s not year clear whether Blake will focus on acquiring a roster player out of some combination of their 15 draft picks amidst the top four rounds over the next two seasons. “I think our focus obviously shifts tomorrow morning,” he said. “Mark Yannetti will be in actually on Wednesday, and now we focus on the draft. We start to know the number of picks and kind of the range that they’re going to be in. So, we started focusing on that, similar to what we did last year.”

— And, one last bit on the players tasked by Todd McLellan last week to “figure out” where they fit within the organization’s plans heading into next season, with McLellan clarifying “that would be Amadio, Wagner, Lizotte, Moore, Prokhorkin.”

“It’s important for those guys to show what they can do the next 20 games,” Blake said. “A lot of times, when I speak of ‘young,’ I’m talking about Gabe, Mikey Anderson. But we have another young group too, in the middle there, and those guys have a lot to prove here this next stretch run.” 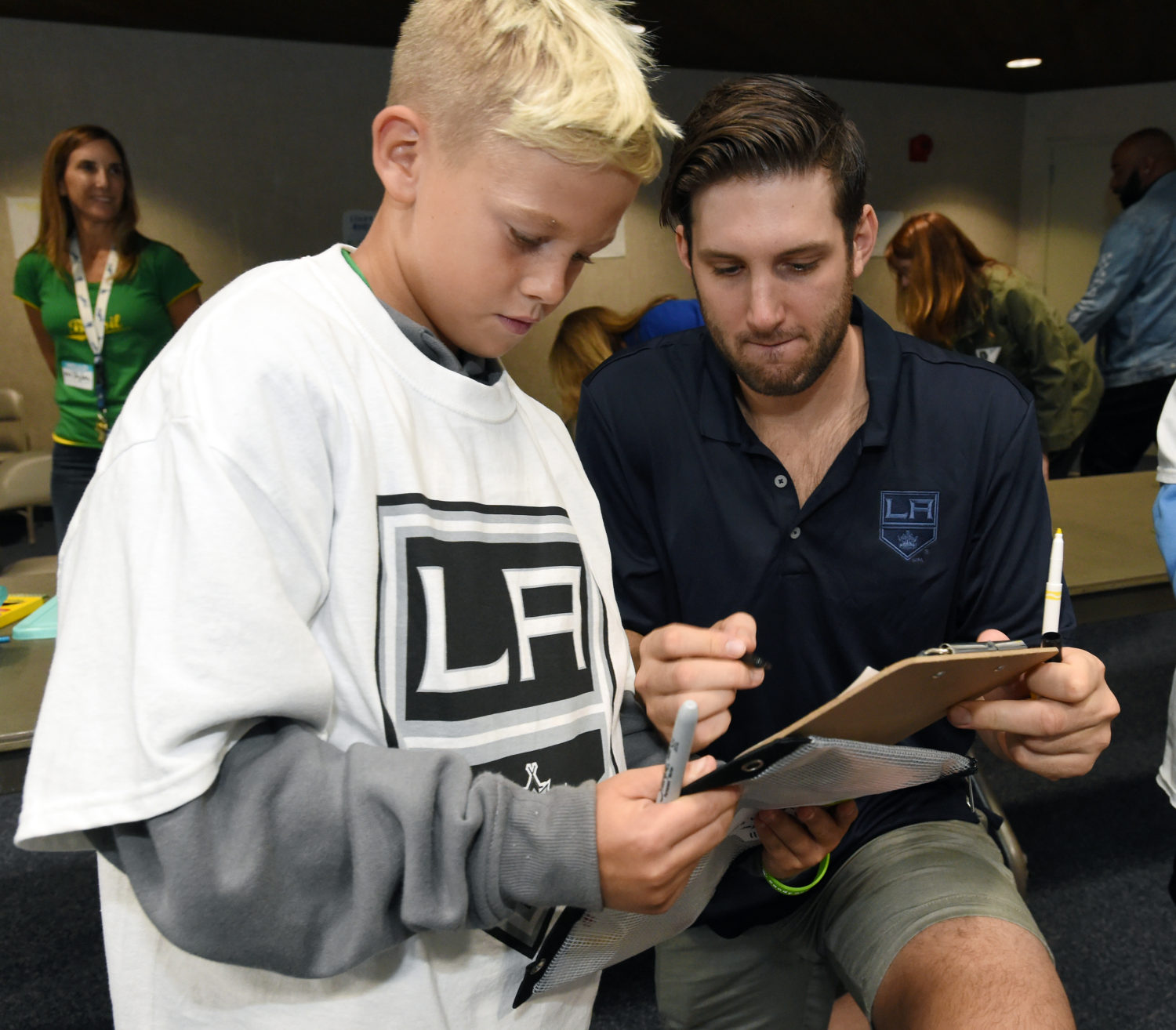