As shared in a tweet thread by Bob McKenzie earlier this afternoon, the LA Kings and Vegas Golden Knights are working on a trade that would send Alec Martinez to Vegas in exchange for a package that includes two second round draft picks. It wasn’t specified whether both picks would be in 2020 or whether one (or, hypothetically, but unlikely, both) would come from 2021. The Golden Knights have five second round picks in the next two seasons – their own two, plus Pittsburgh’s in 2020, and New Jersey’s and St. Louis’ in 2021. The Kings already have 10 picks in 2020 – seven through the first four rounds – and eight in 2021.

It’s not done yet, but VGK and LA are working to try to finalize a deal that would send defenceman Alec Martinez to the Golden Knights. Most telling sign will be if Martinez is in or out of the Kings’ lineup tonight vs. WPG.

The Kings shared a note that Martinez, who has one season remaining on his contract, would be held out of tonight’s game for “precautionary reasons.”

Should this deal be consummated – and all signs point that way – it would be finalized on Wednesday. As of now, no trade has been finalized. Do not expect this to become press release-official tonight.

Martinez answered questions about his own trade possibilities earlier today, though much of the discussion took place within the context of the Tyler Toffoli trade (and also with the understanding that Winnipeg was interested in Martinez).

“I’m certainly aware of the situation, and I’d be lying to say that you don’t think about it. I mean, we’re all human beings,” Martinez said. “That said, I’m a professional and I knew what I signed up for, this is a business. I’m going to continue to play hard, no matter where it’s at.”

Should this be the end of the road for Martinez as a King, he’ll depart the club with 11 seasons under his belt in which he amassed 597 games, 62 goals, 136 assists, 198 points and a +23 rating. In 41 games this season, Martinez has one goal, eight points and advanced statistics that were in the red, relative to his teammates, in 5×5 CF%, SF% and xGF% despite excellent shot-based metrics earlier in his career.

“I think I’m playing better hockey as of late, coming back from my injury,” Martinez said this morning. “I think its kind of been a different year for a lot of us, just learning new systems and things like that. Yeah, kind of a weird one with the nature of my injury, and not really going through anything like that before, but all I’m trying to do is just play the best hockey right now.”

This hypothetical trade was expected, just like the Toffoli trade was. Simply put, Martinez will be 34 the summer his contract expires. The Kings will be more inclined to play their burgeoning crop of young talent rather than extend or sign a mid-30’s player that would block their paths. While he’s also signed for next season, the Kings are not currently poised to make a leap towards contender status in 2020-21, and again, his presence would provide a road block for players on the cusp of earning the right to earn an NHL opportunity like Mikey Anderson, Kale Clague, Sean Durzi and others. This is what happens in rebuilds. You can’t “rebuild” while “retaining expensive, aging talent without promising returns.” For those to whom this explanation is especially remedial, you are welcome to take a look at my Twitter mentions.

Vegas’ interest in Martinez isn’t a surprise. They, like Winnipeg, tonight’s opponent, have been looking to add to their defense. (The Jets acquired ex-Shark Dylan DeMelo earlier today for a third-round pick.) I first heard of the Golden Knights’ interest in Martinez in early November, and by the time the Kings had returned from the January trip through Florida, they were regular presences at L.A. game. This peaked in the last two weeks with Kelly Kisio a regular Kings observer; he was eventually joined by Jim McKenzie for several games, and, while the Kings were at Madison Square Garden two Sundays ago, Golden Knights Director of Hockey Legal Affairs Andrew Lugerner was listed on the scouting list, a major eyebrow-raiser for a team that one night earlier had sent three scouts to the game in New Jersey. Director of Player Personnel Vaughn Karpan also caught Los Angeles’ win in Arizona three weeks ago.

I’ll join Nick Nickson for the entirety of tonight’s pre-game show on the LA Kings Audio Network and will also join Patrick O’Neal for a quick hit during the first intermission. More on the Toffoli trade from Anze Kopitar, Jeff Carter and Drew Doughty is below. 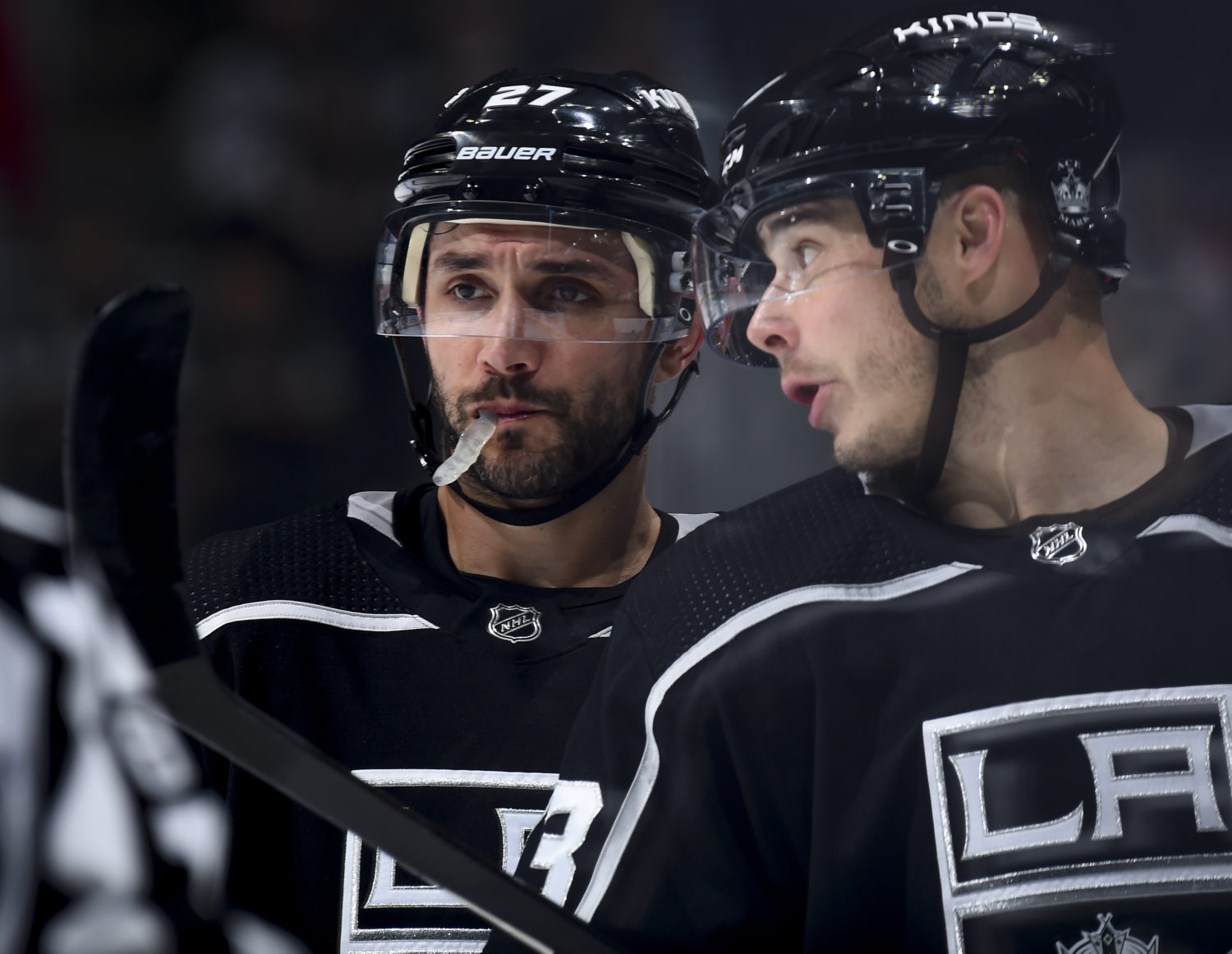 Anze Kopitar on Tyler Toffoli:
…it seems like we played together forever. We won together, which makes it extra hard, but at the end of the day, we kind of all saw it coming. It’s unfortunate, to lose a teammate, to lose a friend, but you’ve got to look ahead and move on.

Kopitar, on the week ahead, knowing that there could be more changes:
Yeah, I mean honestly, it’s just kind of focusing on the game, try to out there and compete and perform. What happens off the ice, happens off the ice, there’s really no control in our hands, so we’ll just move along as we go.

Kopitar, on the current hallenge for the leadership committee:
Obviously, you want to play as well as you can. To say that you can’t get distracted from that, it’s untrue, so again, try to move along and play the best you can and know when stuff happens, it happens and just kind of deal with it.

Jeff Carter, on his favorite memories of playing with Toffoli:
Oh, we had a lot of fun. When him and Tanner came up, they were young guys, full of energy and we were winning games then. We just kind of rolled and it was a lot of fun playing with them. We’re going to miss him here, but we understand what’s going on and it’s a real good opportunity for him in Vancouver.

Carter, on the leadership committee’s focus to make sure the standards are maintained:
It’s not easy. The guys that are moving on now are guys that have been around for a long time and won here and were a big part of this room. I think everybody in this room has done a good job the last month, or however [long] it is, of kind of putting all that aside and just coming to the rink and playing, doing our job. Obviously, we would like some more wins, but we’re doing some good things, we’re building, so that’s really it. You’ve got a job to do, you come to the rink and you play.

Carter, on whether this week is a distraction for the group:
No, that’s kind of just what I said. Everybody understands, for the most part the guys that are being talked about are veteran guys that have been around for a long time, been through it and they know how to deal with it. Like I said, guys have done a really good job of just coming in and going to work and we’re doing some good things and hopefully we’ll keep getting a few more wins.

Drew Doughty, on his favorite memories of playing with Tyler Toffoli:
He was just a great guy, a really good player too, Vancouver’s lucky they’re going to get a really good guy and a player like I said. Lots of good memories with him, at the rink, outside of the rink. I don’t know exactly which ones to share with you guys, but yeah, we’re going to miss him for sure. He put a lot into this organization, he made us better every day and we’re sad to see him go, but we understand it’s a part of the business.

Doughty, on the mood around the team a week out from the deadline:
Obviously, we’re all aware of what’s kind of going on, all the rumors and stuff like that, so it’s sad to see your friends go and your teammates go. At the same time, we’ve got a job to do and that’s trying to win hockey games. Winnipeg’s a good team here tonight, and we’re just trying to get on a roll here. We’ve won two in a row, trying to make it three.

Doughty, on Alec Martinez:
He’s a very good shot blocker, good skater, he gets his shots through from the point, he has a good little wrister on him, he can hammer a one-timer too actually. Good defensively, the game’s kind of gone in a different direction, just offensive d-men, so Marty’s a good two-way defenseman, who’s going to make any team better, and he’s a good professional as well, and a good person.