— The vitals: Jonathan Quick was the first goalie off the ice and is expected to start versus Washington, against whom he’s 9-4-0 in 13 career games with a 2.51 goals-against average and a .910 save percentage. Nikolai Prokhorkin, Joakim Ryan and Derek Forbort were the odd-men out, and Drew Doughty should return to the lineup after missing three games that ended his franchise-record 460-game streak

— On Doughty. The lower-body injury, he said, was “something that’s been nagging … for a bit of the season, and then I got hit in Philly late in the game and over the break thought it was just some normal tightness – nothing to worry about – and then when I got into practice [Sunday], it just really tightened up and we had to take a few days off and get it back to 100% before we could play again.”

He’d played in 659 of 660 games prior to getting hurt, and his 902 career games come with a reminder that he was the gift of a prior rebuild, a player who celebrated his 19th birthday early in his first season just over 11 years ago. When he returns tonight for game #903, he’ll look to emerge from a tie with Rob Blake (161-333=494) and become the franchise’s all-time leader in points by a defenseman. He has 116 goals and 378 assists to match Blake’s 494 points but had registered just one point in eight games prior to missing the last three and hasn’t scored since December 7 at Calgary.

But along with Anze Kopitar and Dustin Brown, he’s been remarkably durable for someone who plays hard, demanding minutes against the league’s best competition. It’s a testament to these players’ abilities to play through pain and nagging injuries, and as Doughty shared, that “durability” and ability to escape injury sometimes does come down to will and luck.

“Throughout the summer, yeah I train hard, but I’m not absolutely killing myself trying to create crazy good strength throughout the summer. I’m more worried about maintenance, making my body feel good. Seeing guys outside of the gym to do work on my body – I’m big on that, too. I attribute that to my summer workouts – not killing myself and just maintaining my body.”

To Doughty’s credit, his conditioning has improved significantly since his earliest days in the league. Some have questioned that regimen – “they still do to this day, it’s a constant thing,” he shared – but if a future Hall of Famer plays his style of hockey and competes the way he does amidst emblematically heavy team tendencies and appears in 986 out of a possible 1,006 regular season and playoff games over that span, I’ll trust his off-season approach, especially when a good handful of his tensest games were played in addition to Olympic competition and abbreviated means for summer recovery. “It’s been a constant thing, but I’ve always played the most minutes in the league and I’ve always for the most part been healthy, so obviously I’m doing something right,” he said.

It’s relatable to tonight’s opponent. With only 47 man-games lost to injury entering tonight, the Capitals – again – are among the teams that have been least affected by injury, at least according to statistics at our disposal. The Cap Hit of Injured Players (CHIP) is a metric borrowed from nhlinjuryviz.com that demonstrates the “per-game cap charge” of a player that misses a game through injury or illness. This year, only Carolina has been less affected by injury. The three previous seasons, this CHIP rate again placed Washington as the team that was least affected by injury.

The Capitals’ athletic training staff has not sealed a cursed pact with Lucifer, no matter the curious omens of both a recent Stanley Cup and World Series triumph in the city. But there are other criteria to consider beyond simple “man-games,” and even CHIP. Are all teams reporting all injuries equally as a league standard? Are these injuries soft-tissue injuries? Are they more random, blunt-impact injuries, like when a player breaks a foot blocking a shot? Does rest have a correlation on injuries, in which case a team like the Capitals, a team that doesn’t travel two and a half hours to play divisional games, might benefit?

Standards have improved over the years, both in the players’ conditioning habits and the way they’re managed to best sustain themselves for a two-month zombie slog that follows an 82-game marathon.

“Pace of practice is also important,” Todd McLellan said. “I even think back to some of us that played where practices used to be an hour and a half to an hour and 45 minutes long. I believe in a lot of those skates we were de-training the players. You got tired and you just kept practicing, and all you did was de-train. Now we’re quick, to the point and try and get a lot of pace out of them, so perhaps that helps. We watch minutes, we look at starts and there’s a lot of luck involved in staying healthy.” 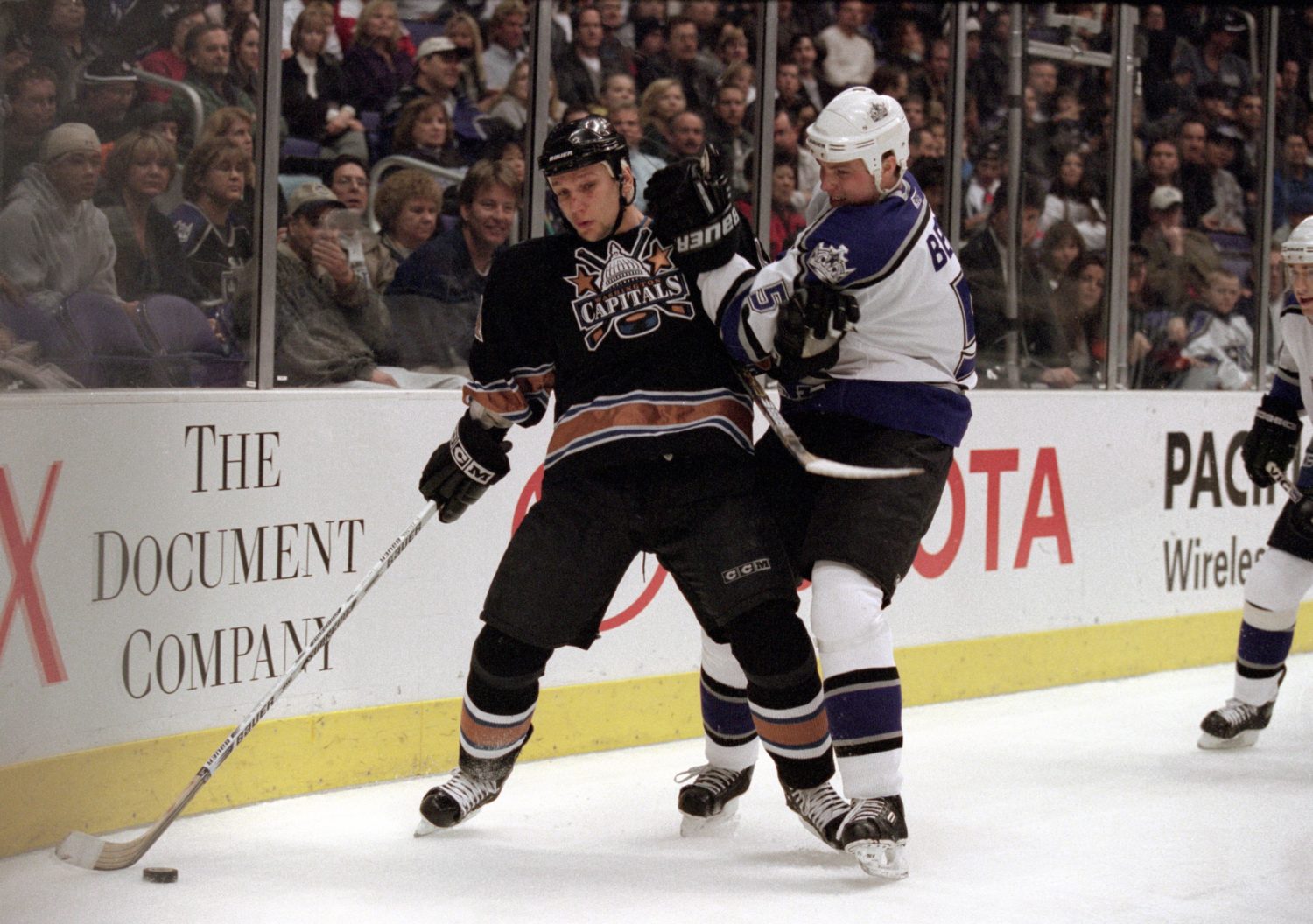 Samsonov was hit with Ovechkin shot before leaving Capitals morning skate. Ovechkin said it was obviously an accident. Thinks he’ll be ok.

Samsonov wasn’t projected to start anyway, per coach Todd Reirden as shared by Samantha Pell of the Washington Post; the Caps recalled Vitek Vanecek from AHL-Hershey as a precaution. But L.A. will face Braden Holtby, who’s 1-2-1 with a 2.51 GAA, a .911 Sv% and a shutout in four career games against them. All of a sudden, a series that had been tilted towards Los Angeles, especially at home, has shifted: the Kings are 1-4-0 in their last five road games at Capital One Arena, getting outscored 20-10, and have dropped three straight in regulation in the series. (Los Angeles is 60-38-15 all-time against Washington.)

Some interesting stuff on hittin’ and hopin’ in the neutral zone so that he doesn’t get up to speed. But he’s Alex Ovechkin, so he’s gonna score anyway.

— More to come from the rink, but here’s Todd on Carl Grundstrom’s game: “He’s had a chance to stay there for a while and play a prominent role in Ontario where he’s been a go-to guy in a number of different situations. We’d like to get a confident Carl into our lineup, and we believe we have that right now, so we’re going to give him every opportunity to start with Carter and Toffoli and get good minutes, and then it’s up to him to keep that. But he’s a player that we really believe in. We think he’s part of the future and the solution here. We’ve just got to get him going to where he can play at a consistent level and feel good about himself and the team feel good about him, and we think that can happen here in the near future.”

— And, one last bit on Drew Doughty, who didn’t travel with the group to Arizona but followed along on television and was “definitely watching it, analyzing the game, analyzing our own players, seeing things we could do differently.”

“I mean, I don’t remember much when it comes to life, but when it comes to a hockey game, I can almost remember everything. I took in everything that I watched in those games. I’d rather watch them up top from a live point of view rather than on TV – you can definitely see more when you watch it that way. I watched every minute of the game, every second.”

I’ll leave Kings Men Podcast to dissect whether the above line – you know the one I’m referring to – registers alongside 2014’s “your heart doesn’t get tired.”

But Doughty does have very astute observations of players and teams, so I was interested in see what he’d seen from such an unfamiliar vantage point, whether on TV or above the rink. First, he was really happy for Alex Iafallo, who’s developing as an offensive weapon for this team. “He’s a guy that we need him to score. He’s on Kopi’s line,” he said. “They’re the line that creates by far the most chances, so that was really good to see. I’m really happy for him, because he’s a good two-way player.”

As for opponents, while he wasn’t happy about the outcome, and though he’s itching to return, he did share an appreciation for Brayden Point, Nikita Kucherov, Steven Stamkos and Victor Hedman, listing Tampa Bay’s key figures as those he’d keyed in on last week at Staples Center. “It was a lot of fun watching them play. They’re great to watch play.”

— More on tonight’s tilt from the rink, gang. Tonight’s officials are referees Gord Dwyer and Corey Syvret and linesmen Libor Suchanek and Jonny Murray. Thanks as always for reading.

After today’s skate, Todd and Daryl met Scout, a very, very good doggie training to become a service dog for veterans and first responders with disabilities through a partnership between @monumental_sports and @americasvetdogs.