Waking up with the Kings: January 30 - LA Kings Insider

Waking up with the Kings: January 30

When a team like Tampa Bay is at or near the peak of their competitive cycle and playing amidst a 13-2-1 stretch, they’re capable of eking out the breaks and bounces in narrow games against teams that don’t quite match-up, personnel-wise. And so it continues: The LA Kings played two very, very good games against the Lightning and earned one point when they coulda-shoulda-woulda banked four. There were extraneous circumstances, but let’s also face it, they were unable to hold or expand two-goal leads in both games despite opportunity to do so, and an aggressive pinch by Ben Hutton allowed two-thirds of the Triplets to find a dent in Los Angeles’ armor and pull themselves back into the game. It’s good to see the type of go-go-go aggression that the team would like to play with, and the player’s intuition should be to play with confidence and with purpose, but there’s certainly room for a debate as to whether a 2-0 lead was the right time to make that pinch. “I think of our team, we didn’t make them pay for their mistakes, and they made us pay for ours, and that’s the difference between a 70, 75-point team or whatever they are right now, and our club,” said Todd McLellan, who prior to the game compared the Kings’ current cycle to where the Lightning were between their 2004 Stanley Cup and rise under Jon Cooper. “I don’t think they worked harder than us, I don’t think they were committed any greater than we were, I don’t think their game plan was any better than [ours], they just have the skill right now to make you pay, and for every three chances they get, they find a way to chip one in the net, and we need sis, whether it’s us keeping it out or putting it in. It just really sums it up that we’ve got some work to do roster-wise, talent-wise and team-wise.” 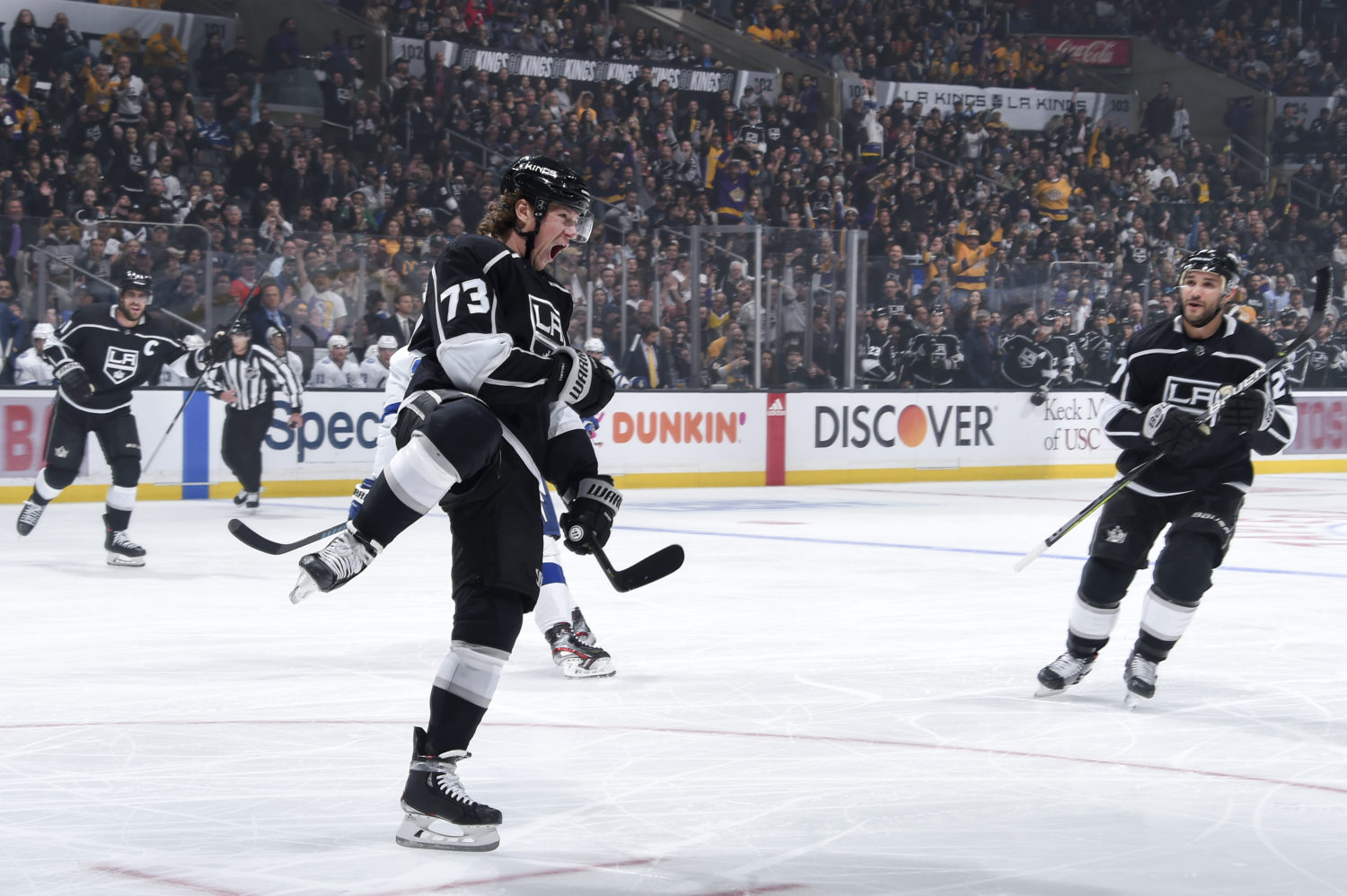 With the game at 2-1, Kurtis MacDermid and Yanni Gourde exchanged a few jabs and slashes across the ice but nothing that crossed any line, so it was a surprise to see MacDermid get whistled for what appeared to be a benign continuation of their exchange. But MacDermid has a reputation, and the slash, though seemingly within the boundaries of what’s acceptable, was a retaliation for a hit on Sean Walker. Gourde and the Lightning will often get that call, even though it probably wasn’t as much of a penalty as Mikhail Sergachev slowing Kyle Clifford down by a step along the boards in the neutral zone on a shift that followed Steven Stamkos’ game-tying missile. Though they were zapped by remaining on the ice for the entire 2:13 between MacDermid’s slash and Stamkos’ goal, that penalty kill has to be the gutsiest kill since Willie Mitchell sacrificed his availability for the Ducks series in Game 6 versus San Jose, no? Against a rather capable group of ::reads card:: Victor Hedman, Nikita Kucherov, Brayden Point, Alex Killorn and Stamkos, Anze Kopitar and Alec Martinez finished with two blocks, Joakim Ryan dove in front of a Kucherov one-timer to save a goal and Jonathan Quick made four saves. And the Lightning still won the war of attrition. If Alex Iafallo, Kopitar, Ryan and Martinez need the morning off, they might want to order some coffee and room service and send the bill to the officials’ room. McLellan actually did have a word about the officiating after the game. He didn’t like Stamkos’ spin to win the faceoff for Kucherov, who placed it on a tee for Erik Cernak. Ignoring for a moment the sordid poetic justice that placed Cernak in the precise spot to receive Kucherov’s handoff and score a third period, game-winning goal, McLellan offered perhaps his most direct assessment of an officiating error to date this season. “The linesman in that case, I don’t think you can cheat any more than they cheated, and he should’ve blown it down,” he said. “He knows he should’ve blown it down. We talk about it, but they’ve got a hard job. So, we move on. Unfortunately, we didn’t get the game.” 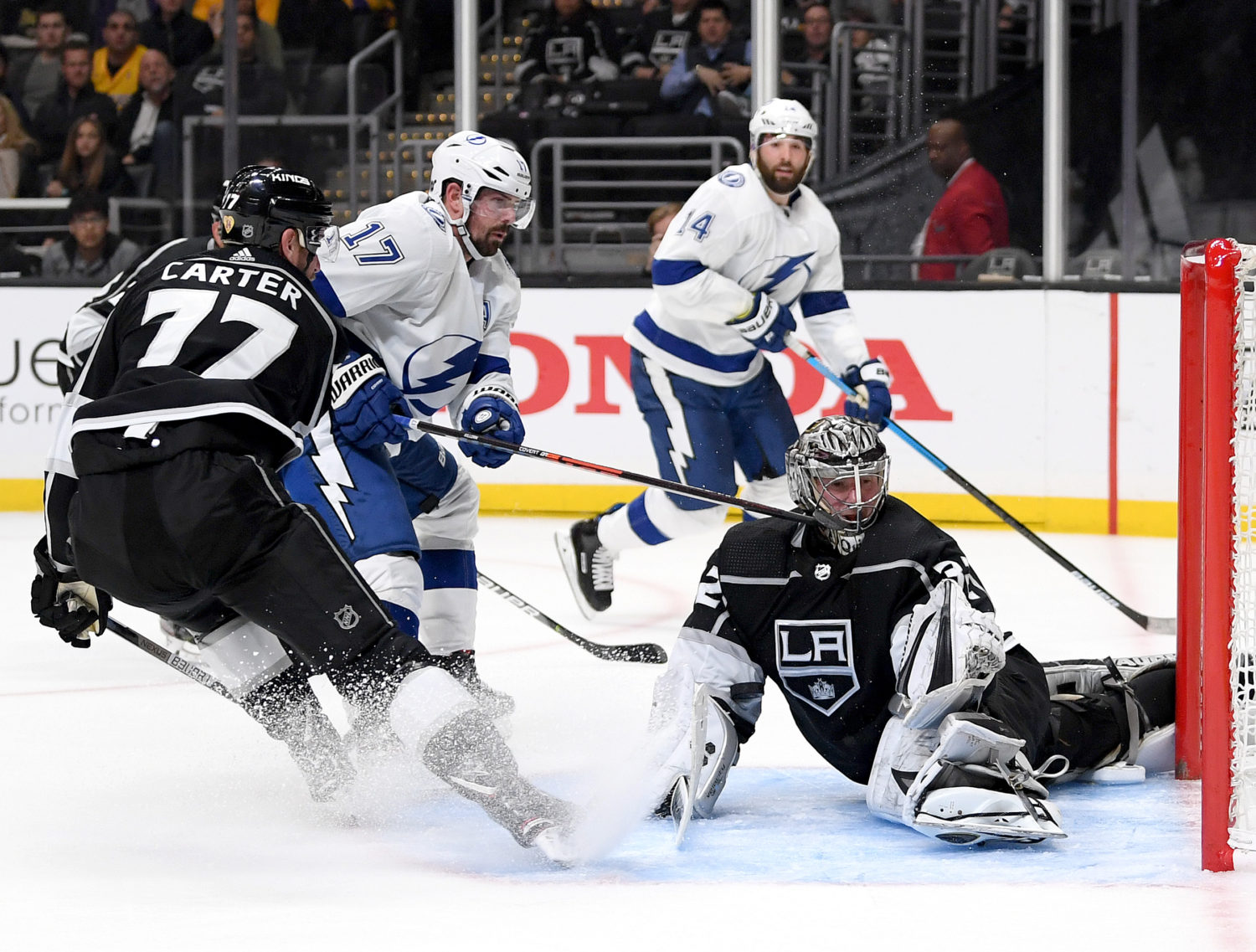 To McLellan and the players’ credit, you don’t hear excuses. You usually don’t hear excuses in hockey. Todd has shared at appropriate times his encouragement in how they’ve played competitively and with great pace and structure yet lost, but I’m not seeing many easy outs or lapses in effort or concentration on the ice. This is not a team lets games get away from them, nor should it be. An unclear forecast indicates winds of unease may develop as the trade deadline nears and players will leave the room of a team that’s now 18-28-5. This has been a difficult January. They haven’t played poorly beyond the expectation that any team has the potential to suffer a lapse for a few periods here or there given the competition and parity, but they’re 1-7-1 this month and need a win or “need” overtime loss to avoid this becoming the worst January in franchise history, eclipsing the 3-13-0 1969-70 squad’s .188 points percentage. When the team reconvened this week, McLellan reinforced expectations in their initial team meeting, referencing “four pillars” of pushing standards on and off the ice, improving structure, building pace, and controlling attitudes. This is going to probably be a trying stretch for McLellan and this group. The effort and will has been there, and those four pillars did seem to be trending well in a more panoramic view, never mind the lack of reward. This is a really challenging stretch, and it’s probably a good thing they have an east coast road trip next week in which they’ll look to skate, practice and play without distraction. 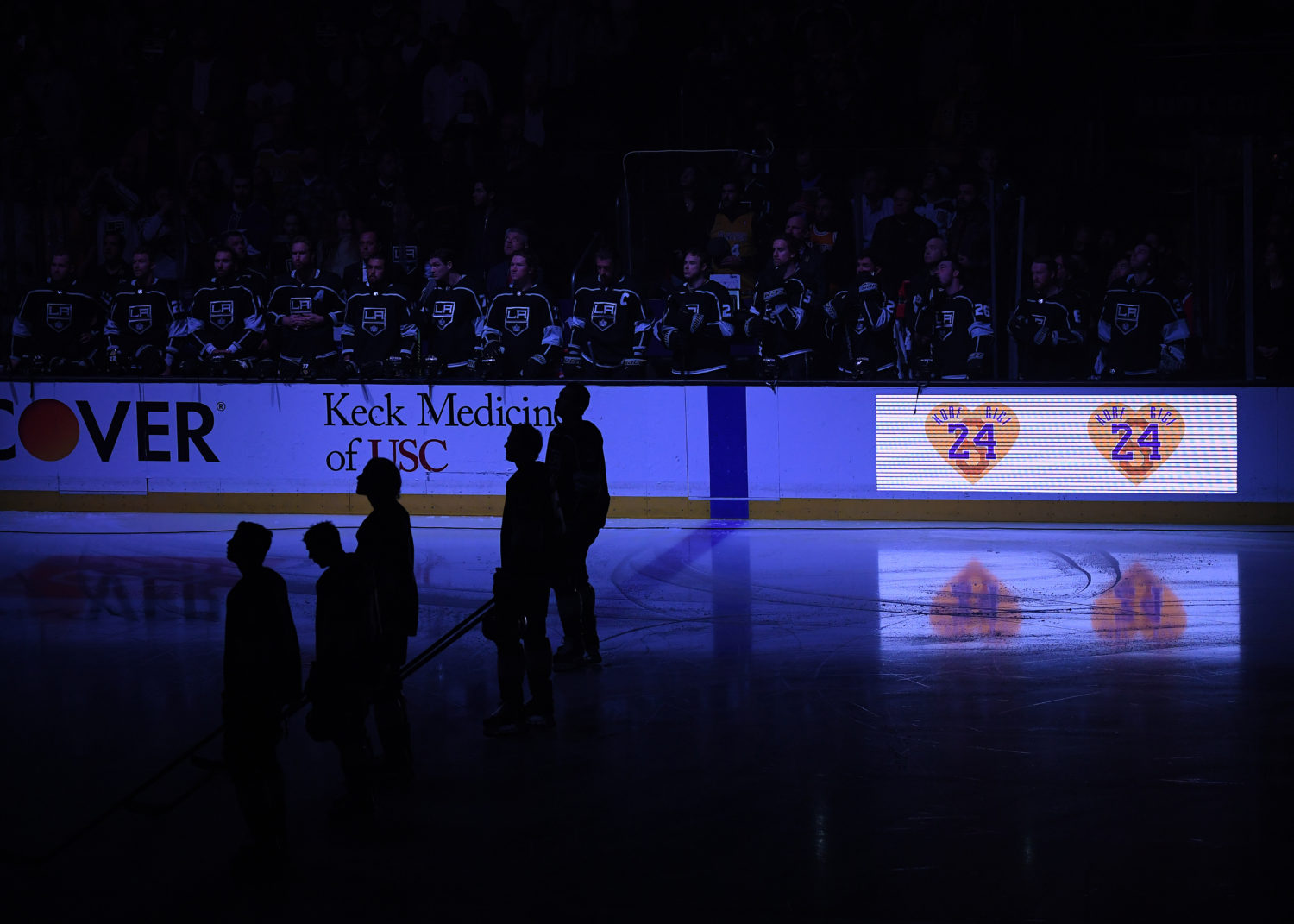