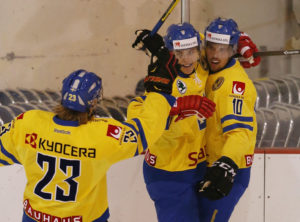 It wouldn’t be a stretch to assume Adrian Kempe and Oskar Lindblom are good friends. They’re both from lands north of Stockholm: Lindblom hails from Gävleborg County, where he played for local Gävle club Brynäs IF, and Kempe from one county to the north in Västernorrland, where he suited up for Örnsköldsvik outfit MODO Hockey.

Their bonds were strengthened while teammates at every level for Sweden’s national junior team. They played together at the 2012 World U-17 Hockey Challenge and made the jump to compete as underagers at U-18s that season, as well. Two years later they began the first of consecutive World Junior Championship campaigns, where Lindblom assisted on four Kempe goals and Kempe assisted on two Lindblom goals. In the 2015 tournament, they combined for four goals – three by Lindblom – in a rout of Switzerland. That tournament, the two who’d skated together since U-17s were joined at even strength and power play time by William Nylander.

Lines, pairs and hockey-related minutiae became just that when Lindblom was diagnosed last month with Ewing’s sarcoma, a cancer that forms in bone or soft tissue. From there, the hockey world united behind Lindblom, as did Kempe’s teammates in Los Angeles while the team passed through last weekend.

“Growing up, since we were 16 we’ve been playing together – very often on the same line, too. We don’t live in the same city, but we talk a lot and he’s one of my better friends, for sure, especially during those years we played together,” Kempe said.

“I’ve been talking to him the last couple days. He’s hanging here around Philly and I think he’s getting some good treatment, and obviously I just wanted to say hello to him and spread some love. It’s a hard time for him and his family, and knowing him very well, it’s an especially tough time for me, as well. I just wish him the best all the time and before every game. He’s a hell of a guy and a hell of a player out there, so hopefully he’ll get better.”

Wearing Oskar Strong shirts prior to Saturday’s game, Kempe and his teammates showed that the bonds between those who play NHL hockey is often stronger than the colors of the jerseys they wear. Click here to purchase an Oskar Strong shirt through Biscuit Tees, a company owned by Kim Parent, daughter of former Flyers goalie Bernie Parent, and here for more of the LA Kings and NHL’s initiatives to raise awareness, funding and resources towards fighting cancer.

Here's the 3-0 goal for Sweden. Great passing play results in Oskar Lindblom scoring. Adrian Kempe and William Nylander with the assists on the PP. #IIHFWorlds pic.twitter.com/rkzjN28HxB