Waking up with the Kings: December 28 - LA Kings Insider

By Zach Dooley For LAKingsInsider.comDecember 28, 20190 CommentsUncategorized
Photo by Brandon Magnus/NHLI via Getty Images

For the first time this season, and the first time since March 2019, the LA Kings trailed through two periods of play and came back to win a hockey game. If you looked at the box score, you might have throught March 2013 – Three points from Jeff Carter to lead the Kings, against two points apiece from Joe Thornton and Patrick Marleau to lead San Jose. It was a scrappy effort from a scrappy team, going down 2-0 in San Jose, pushing, creating and grinding throughout the third period to get a late game-tying goal and finally coming away with the overtime victory.

The unit of Nikolai Prokohrkin on the left, Jeff Carter in the middle and Martin Frk on the right was the catalyst as the Kings fought back, with Frk netting both his first NHL goal of the season, his first goal as a member of the Los Angeles Kings and his first career NHL multi-goal game all in a span of just one period. His linemates picked up assists on both goals, as the Kings most productive offensive unit on the evening was rewarded for their strong play with the pair of tallies. For Frk, in his first ever game with the Kings, he worked himself into dangerous areas on the ice and used his big-league shot to beat Aaron Dell not once but twice from close range, finishing one pass apiece from Prokhorkin and Carter. Carter went on to make it a three-point night in overtime, as he knocked home a loose puck at the back post for his second three-point effort of the season. Carter’s play since I have joined the Kings on the road has been impressive. Including the Anaheim game before the East Coast swing, Carter has eight points (4-4-8) over his last eight games, with multiple shots on goal in seven of the eight games. The veteran centerman felt that the Kings dictated play for the most part in last night’s win and the third-period outburst of goals felt like just a matter of time. “For the most part, throughout that game, we were playing pretty good hockey, we came out of the zone pretty good, got in on the forecheck and that’s what you’ve got to do against that team,” Carter said. “I guess that’s a good way to put it, is we felt like it was just a matter of time.” 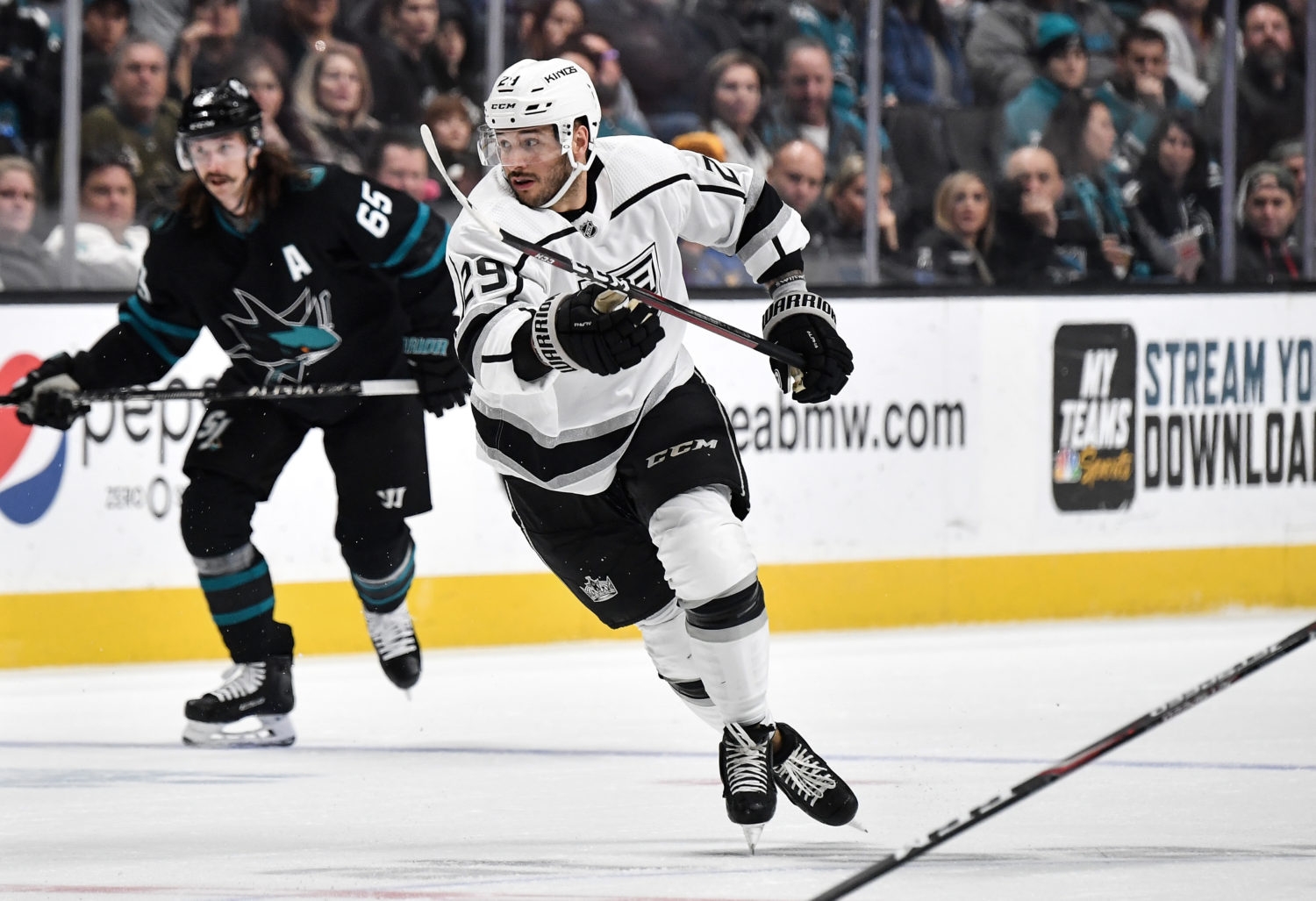 SAN JOSE, CA – DECEMBER 27: Martin Frk #29 of the Los Angeles Kings skates after the puck against the San Jose Sharks at SAP Center on December 27, 2019 in San Jose, California. (Photo by Brandon Magnus/NHLI via Getty Images)

What Carter’s right winger added was pretty Frk’n great as well. To score in your first NHL game of the season, and in your first game with a new NHL club is good, but to score not once but twice, including a game-tying goal late in the third period is exceptional. Frk was productive and active throughout the night – Twice he got himself into a dangerous area on the ice and twice he used his elite finishing ability to bury the puck into the back of the net. Frk has a dangerous weapon in his shot and used it last night to finish off two nice plays created by his line. “Nice to see Marty Frk come up and contribute, use his tools, that shot that he has and the ability to find ice was real important and a good, aggressive play in overtime got us the win,” Todd McLellan said after the victory. Carter noted Frk’s work ethic and shot as what he knew about him coming into the game and boy did both shine through. It’s nice, for at least a day, to not have to try and convince people that Martin Frk can play, kind of in the same way that it’s nice to no longer have to convince people that Matt Roy can play. Frk’s game on the ice last night did a pretty good job of making my case for me, and it will be exciting to see if he can keep it going without the adrenaline of his first NHL game of the season driving him.

In addition to the aforementioned line, the Clifford – Amadio – Luff line was also active in creating chances, with Amadio setting up a few good looks throughout the game. Amadio’s play on a second period look was especially crafty, as he chipped the puck around a San Jose defenseman in his own end, outwaited the far side defenseman on the 2-on-1 rush and hit Adrian Kempe for a good back-door feed, where the Swede just ran out of space. Luff also created a few looks for himself, including a post on a partial breakaway down the right wing. On a night where the top line was held to just one point, seeing others generate opportunities was encouraging.

The Kings face a tall, Frk’n order tonight in Vancouver – Not only did they travel on the day of a game yesterday, but they played in San Jose and faced a long night of travel immediately following the game, only to turn around and play again the next night. Vancouver, meanwhile, has not played since before the holidays. Having played the night before, and already shaken the rust off, could play to their advantage early in tonight’s game, but we will see how much they have left in the tank come the third period, against a team that should have plenty to give.

Game Preview is coming up next, and then we’re off to Rogers Arena! 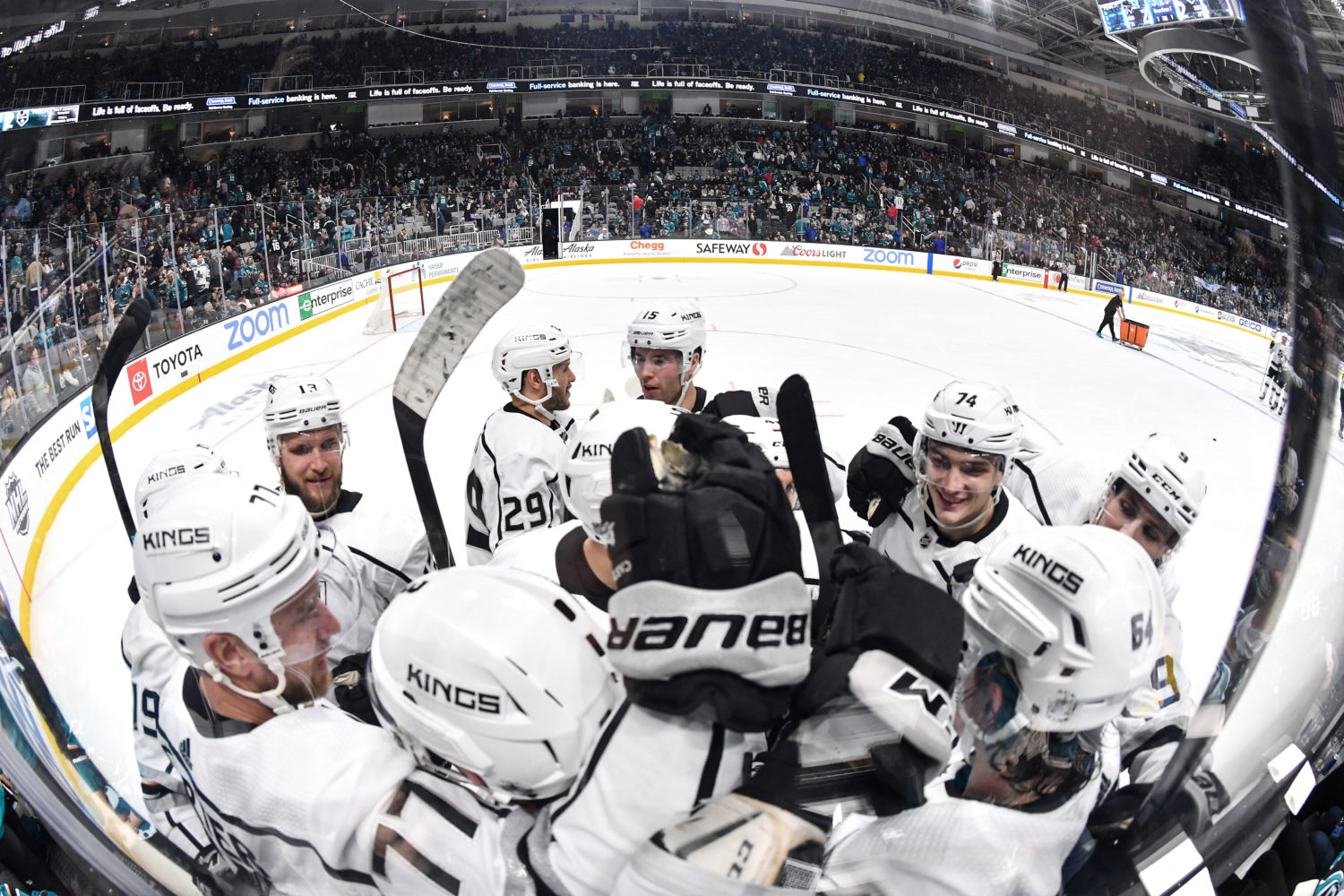