Tuesday’s game seemed poised for a wide shotsball discrepancy between a top shot-metric team that had been playing well at home and a visiting team depicted by statistics as doing a good job of holding the fort despite an assault on their goaltenders. Those predictions turned out to be almost 180 degrees inaccurate, as New York checked and pressured Los Angeles and directed high-quality chances on Jonathan Quick, whose excellence allowed his team to find their legs and opportunistically pot an important late period goal. This time, it wasn’t the Kings ruing their lack of finishing ability after a first period in which they dominated one very late shift but were defending regularly, especially after the Rangers’ five-shot power play. But that wave of momentum carried into the second period, where they scored a decisive win and benefited from Tyler Toffoli outbattling Ryan Lindgren to pounce on a heavy Matt Roy shot that snuck up on Henrik Lundqvist. Toffoli was rewarded for his efforts on Tuesday, and while he wasn’t as sharp in the Alberta games over the weekend, had still largely been showing well along the boards, in transition and deserved better than the six goals he’d scored entering the night. He played some of the more efficient 14 minutes of his career, using his only shot on goal to register the game-winner and slinging the puck to Dustin Brown across the slot to punctuate a dominant shift and open the scoring. 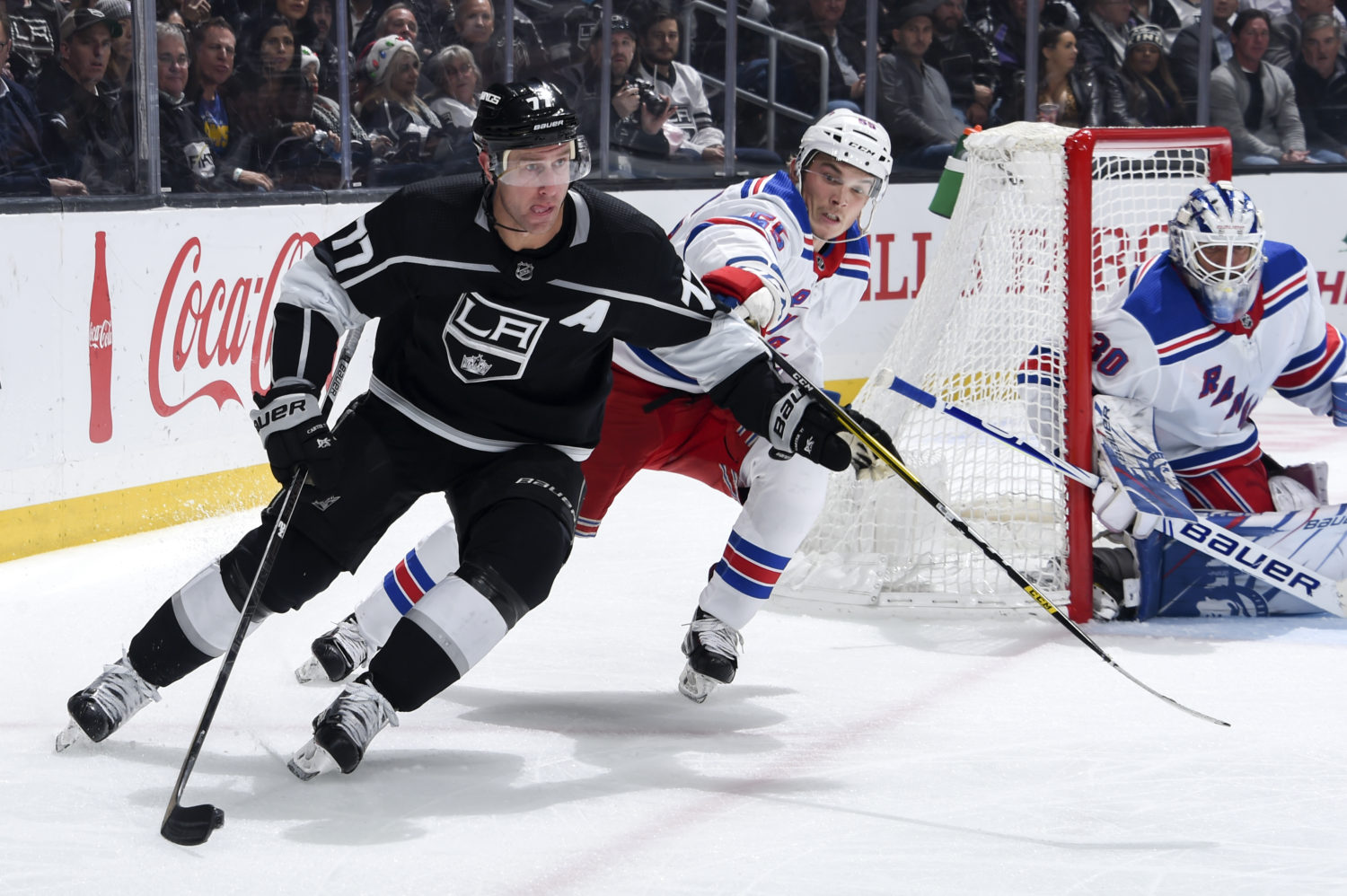 Roy, meanwhile, assisted on both of those goals and continues to demonstrate tremendous growth. Working with all of his facilities in concert, he’s a very good demonstration of a player with raw and natural skill whose athleticism has been shaped well by a number of coaches and developers at the NCAA, AHL and NHL level. One indicator of the type of value they might be receiving with the former seventh round pick came when Larry Robinson approached Mike Donnelly during a 2016-17 Michigan Tech game both were covering to share a positive impression of the defender, then a junior with the Huskies. Donnelly offered a highly detailed scouting report and projection of Roy as a professional, which proved remarkably accurate given his breakthroughs with the development staff and Mike Stothers in Ontario. Amateur Scout – United States Tony Gasparini was among those to advocate strongly for Roy, who was coming off a goalless season and had already passed through two drafts and 193 draft slots when L.A. nabbed him in the seventh round in 2015. It’s not exactly a touchstone for the team, given that the most dynamic player of the three was traded for a goaltending rental near the end of a season in which they failed to qualify for the playoffs, but the Kings drafted well without a first round pick in 2015, claiming Erik Cernak in the second round, Austin Wagner in the fourth and Roy in the seventh. After a straightforward early season meeting with Todd McLellan in which he was asked to improve his play, the coachable and honest Roy has done so, continuing the crescendo of momentum he’d established last year when he provided coaches no reason to remove him from the lineup. 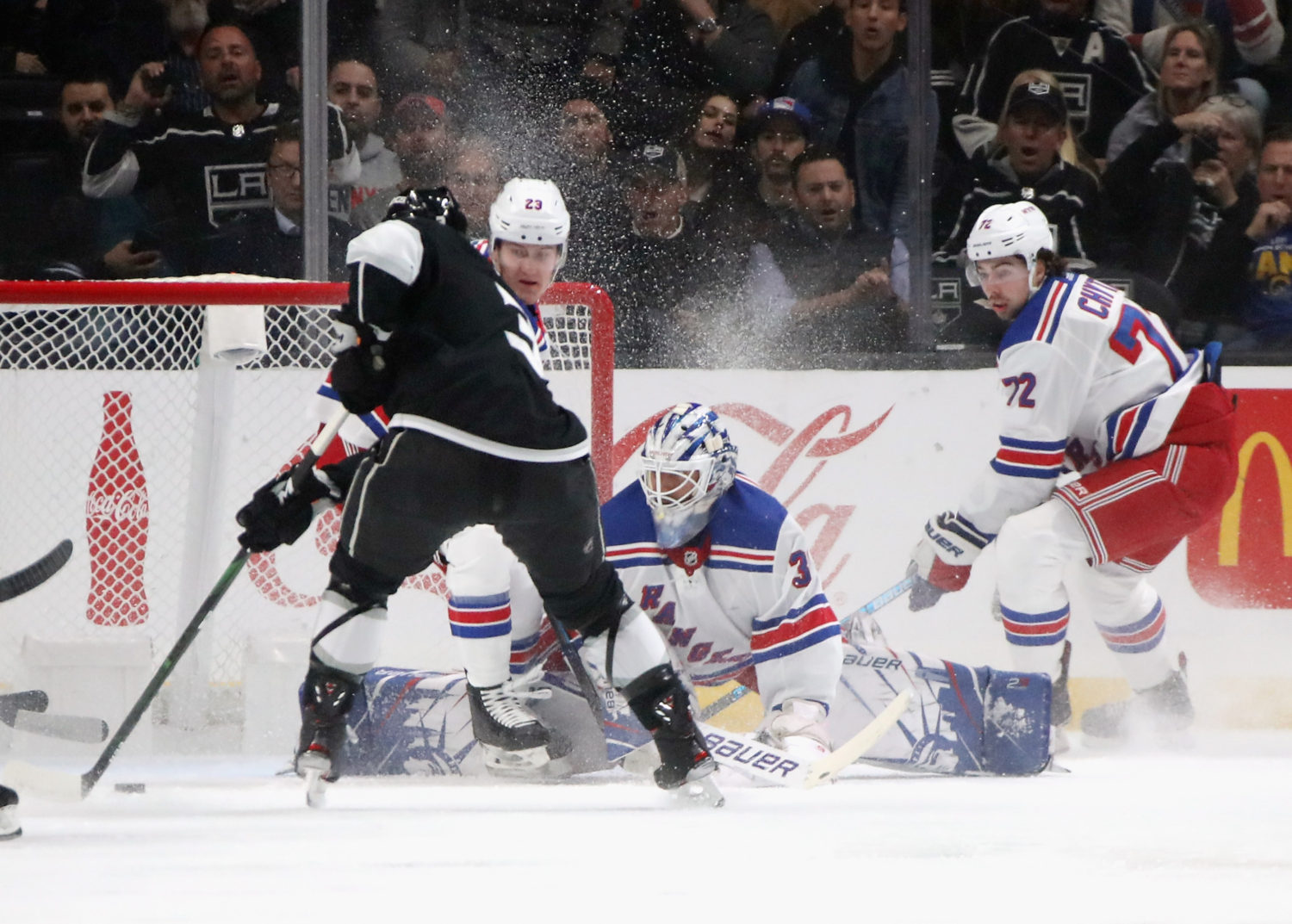 Since New York was in town, it’s smart to take a look at another team navigating a rebuild, just as we did with Detroit and Anaheim after several recent encounters. In February, 2018, Senior Advisor to the Owner Glen Sather and General Manager Jeff Gorton articulated the direction in which they envisioned the Rangers heading by sharing that “some familiar faces” could be exchanged to help shape a new generation of “young, competitive players that combine speed, skill and character.” Since then, their rebuild has been fairly model, though one obviously based on good fortune provided by the ping pong balls. (Kaapo Kakko took eight shots on Tuesday and used his legs and hips to protect the puck as if he thought he was Anze Kopitar and would, man, well, you know what, forget it.) But beyond leaping into the #2 draft spot, Gorton made a tremendous trade in which he acquired a first round pick (later turned into Wisconsin’s K’Andre Miller), Ryan Spooner (later turned into Edmonton’s Ryan Strome, who has 26 points in 30 games and played 20 minutes last night), Ryan Lindgren (a 21-year-old NHL defenseman formerly drafted in the second round) and Matt Beleskey (the expensive part, but 50% of his $3.8M cap hit through 2020 was retained). He hauled in those players (including Beleskey, currently in the AHL) by trading Rick Nash, a rental who’d amassed 18 goals and 28 points in 60 games with New York as a 33-year-old and would retire the following off-season. Los Angeles is a year behind New York in reshaping the roster – the Rangers’ 26.1 average age on Tuesday depicted the youngest group in the league – and as shared around the Anaheim game, would open up a Ralph’s to get a #1 or #2 overall pick. The market will ultimately determine what the Kings receive for the players who aren’t nailed down, but it’s silly and unrealistic to expect any sort of similar haul for an individual asset. New York is very young and headed in the right direction with a dynamic and productive young blue line behind a growing crop of stars with immense offensive potential. It’s not possible to predict exactly how the roster will be reshaped in a year from now, but Los Angeles’ direction and the types of players they’re targeting are similar. We’ll see if the market bears any unexpected fruits. 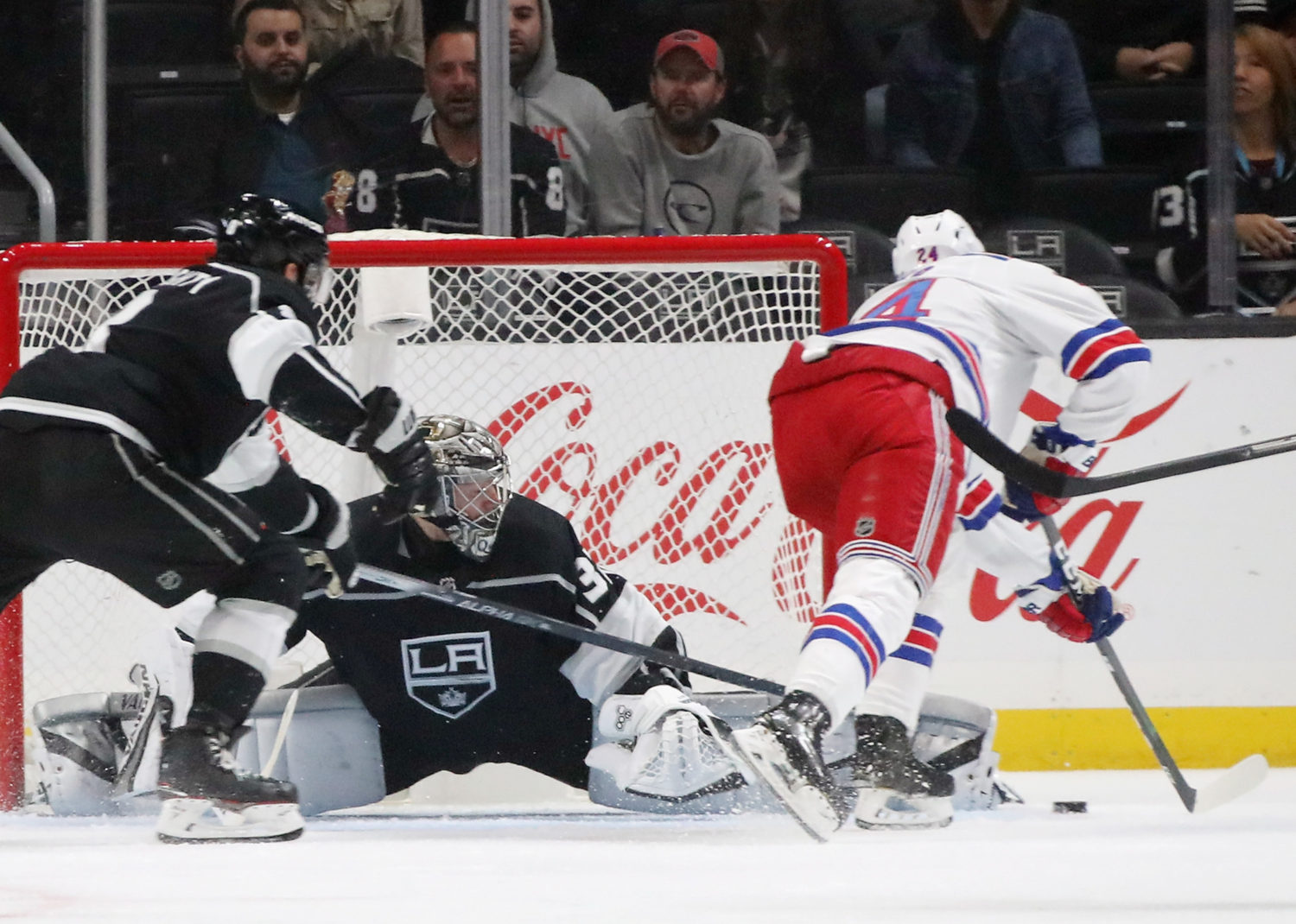 This is my last full day to take care of Life Stuff in Los Angeles before the holidays, so I’ve scheduled a few necessary appointments and errands this afternoon that can’t be put off. I’m leaving El Segundo now – wave if you’re on the 405! – and don’t think I’ll be able to get many updates from today’s skate or quotes from McLellan at a reasonable hour. (Thank you, as always, for your patience.) There didn’t appear to be any alignment changes at today’s practice, which included all active participants. More to come via Twitter, Insiders. Let’s talk soon. 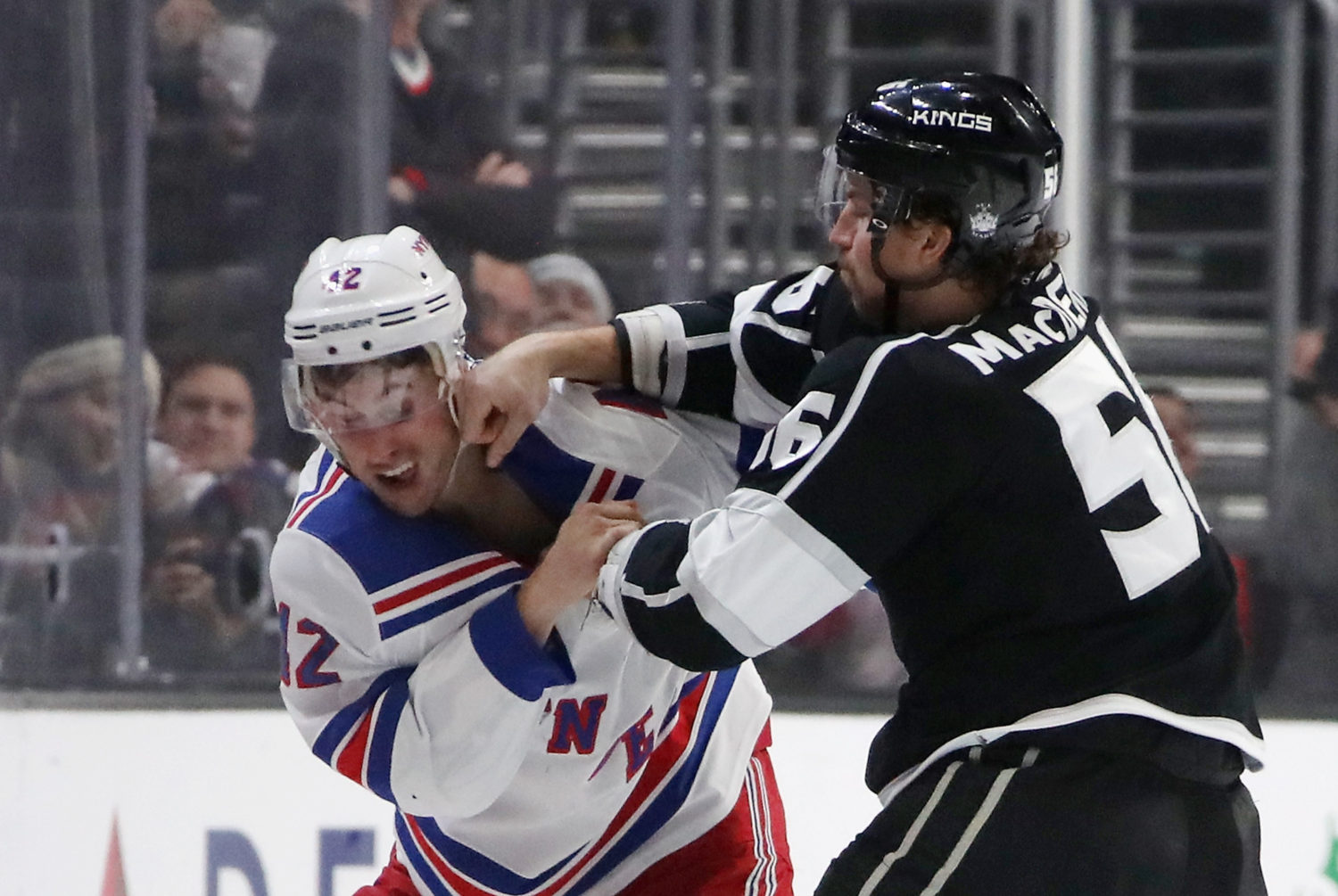