The LA Kings were o-fer their previous five games on the power play when they predictably used all of nine seconds to strike twice on the man advantage Saturday night in Calgary. That first goal was the embodiment of keeping it simple. Anze Kopitar logged one of his 17 faceoff wins (amidst two losses) and received the puck back from Drew Doughty before unleashing a short-side screamer that beat Cam Talbot cleanly.

If there was a reason for a second assist on a goal, this would be it. Todd McLellan would likely agree, having referred to faceoffs Tuesday morning as “the first indicator of competitiveness.”

And, as many would agree, it’s also a reason for Anze Kopitar to shoot more on the man advantage. 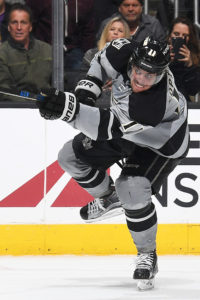 While that’s a completely valid request – one asked of Kopitar by others before McLellan – it’s not as simple as instructing him to “shoot more,” and then taking an early lunch. And before anyone hyper-analyzes a future Hall-of-Fame center’s shooting decisions, let’s also acknowledge that while he’s armed with a lethal shot, he’s also a consummate playmaker who creates offense away from his shot. In 2012-13, he didn’t score one power play goal but logged the best on-ice 5×4 GF/60 of his career, backed by his 16 assists in 47 games, a largely plausible haul even over 82. His skill and puck control and ability to calm plays down amidst pressure are extremely important assets that allow those around him to create and capitalize off opportunity.

But the Kings open tonight’s game with the 29th best man advantage in the league, and Kopitar’s coming off a season in which he scored only one power play goal, and it came in the 82nd game. He’s got the eighth-highest shot rate on the power play among the 11 with a minimum of 25 minutes on it. He’s also been very good at five-on-five, logging fine possession rates and break-even goal and chance metrics despite defensively-skewed starts against the league’s top competition.

But how has he created his opportunity on the power play? What types of set plays do they use to take advantage of his shot? How hard is finding that shot, once you get into the third period of a game and the opponent wants to do everything it can to take it away from him? There are a number of interesting topics to dive into.

Thus far this year, he’s taken only 16 5×4 shots in 30 games, having scored on four of them. He’s created three rebounds. Overall, his rate of 5.6 individual points per 60 minutes is better than his rate in three of the last four years. He’s got a high shooting percentage, an indication that he’s been selective and opportunistic on the man advantage. There’s always the balance of encouraging a stronger shooting mentality while also acknowledging that his skill, hockey sense and responsibility are at elite levels.

“You probably have one shot at running something with each given power play,” McLellan said. “The game never repeats itself. I think there’s other games that repeat themsevles – football, you can call a certain play and a lot of times you get the same thing. Even basketball, when you’re coming up court. But the game is so ever-flowing that you rarely ever get the same situation over and over again. You can work towards it, but you don’t always get it. But Kopi does have a good shot. We’d like him to use it more. When he does, he seems to create a lot with it. It’s not always going straight in the net, but other guys get the chance.”

Anze Kopitar, on how he reads penalty kills to make decisions with the puck:
Well, first and foremost, I’m always going to do whatever I think at that particular moment is the best option for me. I mean, sometimes, yeah, I’ll be the first to admit it that I haven’t shot the puck enough, but shooting the puck to just shoot the puck is not me. [Saturday] night, it worked out really well, obviously. You win the faceoff. Dewey came right to the middle of the ice, and then I had a lot of time, so for me not shooting the puck would probably be a bad idea. And you do your pre-scout on the goalies most of the time. I just kind of picked the corner and it went in.

Kopitar, on whether there are regular set plays that free him up to use his shot:
Yeah, of course. There are certain penalty kills that are aggressive, there are certain ones that are maybe a little bit more passive. Obviously, you try to enforce your place into their structure, but you’re not going to go your headfirst through the wall. You go into a game and a situation w here you read the play, you see who’s open and create something off of that. … You’ve got certain plays that you want to run, obviously, but if they’re not there, you’re not going to try and run them if there’s no room for them. … Yeah, some teams shade more towards me, some teams shade towards my outlets, so it’s just adjustments, really, what it is.

Kopitar, on the balance between being satisfied with advances while rejecting moral victories:
It’s definitely a very fine line between playing well and those moral victories and just being satisfied with losing. Obviously, it’s not good enough. We’re playing well to lose by one on most nights, and that’s definitely not satisfying. Our game is trending in the right direction, and yes, that’s encouraging, but we’re definitely not satisfied with the losses. You know, we’re going to have to figure it out. It’s a part of the growth that we’ve been talking about. We’ve just got to figure it out, that’s the bottom line, whether that’s giving up power play goals that’s hurting us or not scoring on the power play or just flat out mistakes that hurt us at the end of the game.

— Some additional Kings-Rangers minutiae. Joakim Ryan is from Rumson, New Jersey, a North Jersey town off the Garden State Parkway nearby Asbury Park and Long Branch and perhaps a few locations Bruce Springsteen has referenced once or twice. “You’ve got to go maybe 45 minutes south of where I live to get the Philly and Flyers fans,” Ryan said.

Tonight is his fifth career game against the New York Rangers, a team his family owned a share of season tickets to when he was much younger. He shared with LAKI earlier this morning that his family tended to be straight ticket Yankees, Giants and Rangers supporters, rather than Jets and Mets (and often Islanders) supporters whose locus of support is more Long Island-based.

He’s “always been a big Eli fan,” and after Monday’s practice shared his argument that the two-time Super Bowl MVP should be in the Hall of Fame. “If this is the last year of his career, at least maybe he can play out the rest of his season and end on a good note because I think he’s given so much to that organization,” he said Tuesday, only 12 hours or so after Manning’s Giants lost in overtime despite his 207 yards and two first half touchdown passes. Manning is starting because Daniel Jones is out with a sprained ankle.

It’s the composure that Ryan appreciates in the soon-to-be 39-year-old. “He always takes responsibility, even when he plays poorly, so I respect him a lot.”

The Kings have a pair of Western New Yorkers in Dustin Brown (Ithaca, N.Y.) and Alex Iafallo (Eden, N.Y.), but Ryan and Jonathan Quick (Milford, Conn.) are the only Kings who hail from the Tri-State area.

— What a shocking story to wake up to out of Dallas this morning. Jim Montgomery was a top young coach highly respected by his peers who won the 1998 Calder Cup with John Stevens and like Stevens was highly influenced by his time as a player in the Philadelphia organization. Stevens sent his son, John Stevens, to play for Montgomery at USHL-Dubuque, where he won the Clark Cup in 2013. Todd McLellan’s son, Tyson, was recruited by Montgomery at the University of Denver, where he’s currently a senior and alternate captain.

Todd McLellan, on Jim Montgomery:
Obviously I’m aware there was a change there. I’ve known Jimmy Nill for a ton of years and obviously Monty I got to know very well with Tyson playing there in Denver. From what I understand, at least, through the hearsay, it has nothing to do with any type of abuse or anything like that. I feel for both of them – Monty and Jim because it’s a tough situation for both.

McLellan, on how close he follows league meetings:
Other than Mr. Bettman’s that came across on TV, we have not yet – Luc, I believe, was our representative. He’s not even back from them meetings yet, or he’ll be back later on today, so we haven’t had a chance to sit down and review it. But I’m sure we will and will be made aware of what’s being put in place and how we can help. We’re here to help and make things better, not be defensive about it, so we welcome the changes, and we want a really good safe environment. I don’t know I can speak for everybody, but from my perspective, I’m here to help.

Audio! I joined Kings Men Podcast yesterday. Give’r a listen on the way into Staples: