Trevor Lewis is very close and encouraged by his full-team practice yesterday. Could we see him tonight?

Was a bit of a non-sequitur, but Todd dropped a "Lewie will return" while answering a question about roster moves. (Lewis was not among the activations this morning.) 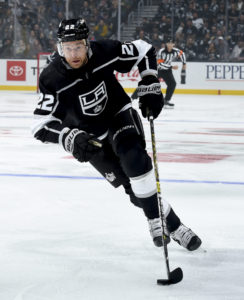 Lo, it has come to be. The Kings activated Trevor Lewis from injured reserve, and given that Paul LaDue, Ilya Kovalchuk and Nikolai Prokhorkin remained on the ice for extra work with Jack Campbell, there’s a good chance we could see him tonight. Lewis, who missed eight games due to a lower-body injury sustained in Ottawa on November 7, has one goal and one assist – both collected in the season-opener at Edmonton on October 5 – in 16 games. “Today (Tuesday) was a big step in getting a full practice in. It felt good out there, so we’ll see how [Wednesday] goes and see what happens,” Lewis said yesterday.

Earlier on Wednesday, the LA Kings recalled Matt Luff and Paul LaDue from Ontario, assigned Carl Grundstrom to Ontario, placed Alec Martinez on injured reserve and assigned Derek Forbort to Ontario on a conditioning assignment. McLellan indicated that Lewis would “return” when answering a question about Grundstrom’s assignment to Ontario. “He’s playing a good, strong game, but as we make lineup changes and give other players opportunity, I don’t think that Grunny is playing in the American League today because he’s been a poor player for the LA Kings,” McLellan said. “I think Grunny’s playing in the American League so he can experience some other scenarios that he’s not getting here, and we chose to play Luff today. Lewie will return. It makes no sense when you can walk 12 steps across the parking lot and play in a game to have a 21-year-old that’s only played 30 NHL games watching.”